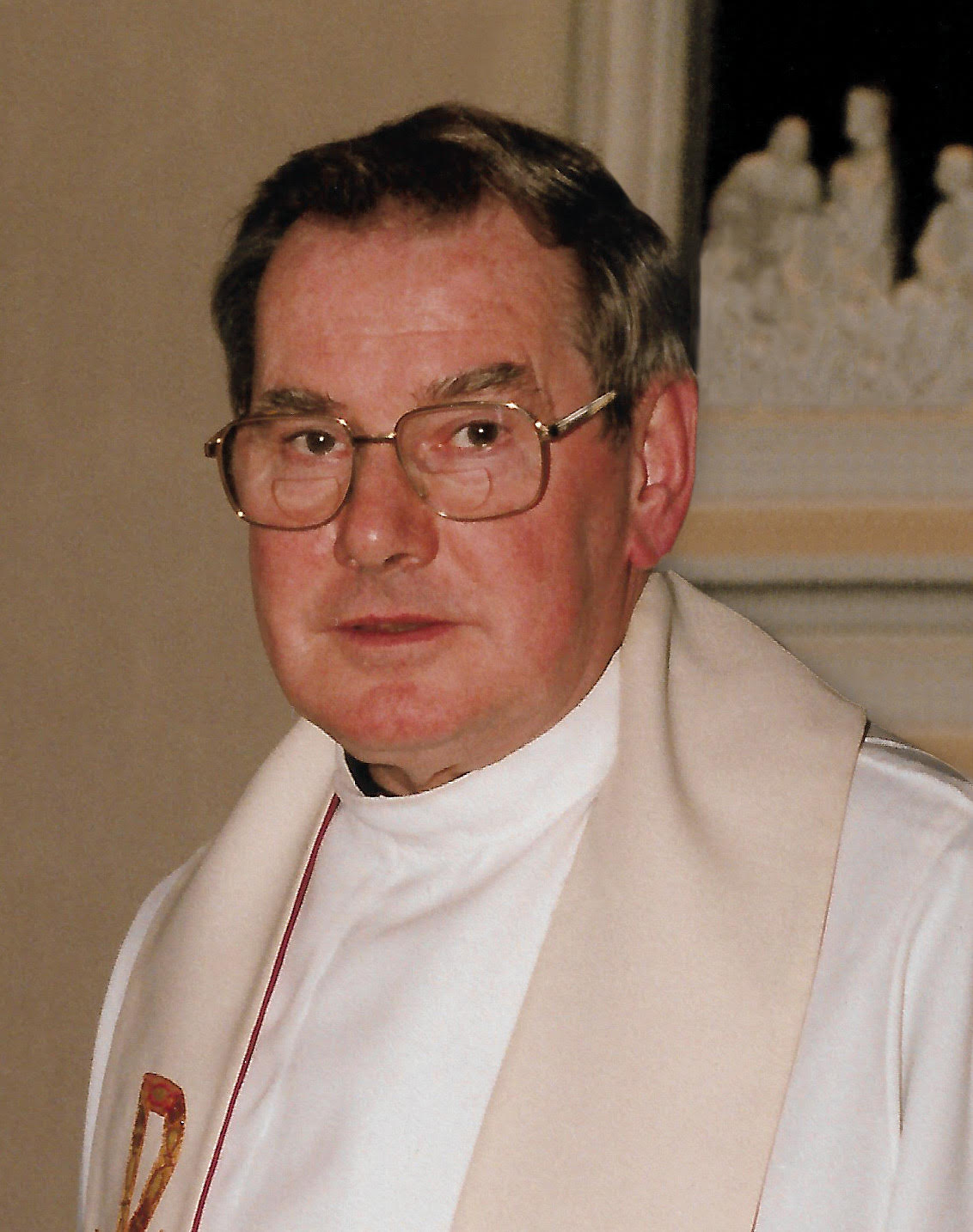 With sadness we announce the death of Fr James Anthony Duffy. Fr Jim died peacefully on 28th December in Watford General Hospital having been admitted for emergency treatment in recent days.

Sympathy is extended to Fr Jim’s family and friends and to the clergy and parishioners of his former parishes in the diocese, and all those who knew him when he was with the Vincentians before incardination as a priest of the Diocese of Westminster.

Bishop Paul McAleenan will preside at the Funeral Mass at Our Lady Help of Christians, Rickmansworth on Monday 18th January 2021 at 1pm. Fr Graham Gillman, a retired priest of the Diocese of Clifton, will preach. Due to restrictions necessitated by the coronavirus pandemic the congregation will be limited to 30 people. The church has live streaming: www.churchservices.tv/rickmansworth.

‘Working with communities to protect and serve’, is the motto of An Garda Síochána, the Irish police. It was well known to James Duffy who was born in Dublin, Ireland on 21st June 1938. His father Charles was a senior and specialist police officer. He and his wife Mary Duffy had four children. Jim’s parents, his two brothers and a sister predeceased him. The family home was in police accommodation on Garda Terrace in the Phoenix Park, 1,750 acres of urban park to the west of the city centre in Dublin’s northside. Jim lived there in the family home from 1938-60. He was educated by the Christian Brothers on North Brunswick Street, Dublin 7. He left school at the age of 18 and took employment as a Credit Controller with Parsons paint manufacturers. His sense of vocation to the priesthood led to acceptance by the Vincentians, the Congregation of the Mission, and he entered the novitiate in Blackrock at the age of 22. In the summer of 1963, he moved on to the Vincentian seminary at Glenart Castle, Arklow in Co. Wicklow. As a seminarian he studied at University College Dublin. He brought a deep faith and a strong sense of vocation, and experience of outreach to others as a member of the Legion of Mary. He maintained an awareness of, and concern for, the poor and disadvantaged throughout his life and ministry.

Jim was ordained to the priesthood by Archbishop John Charles McQuaid at Clonliffe College on 20th May 1967. Then, at St Paul’s College, Raheny, founded in 1950 by the Vincentians to help make secondary education more widely available, Fr Jim had the dual role of bursar and teacher. In 1968 he was sent to Chicago to study Guidance and Counselling, and in 1970 was awarded M.Ed from Loyola University. On his return to Ireland Fr Jim took up his appointment at St Paul’s College as a careers advisor and guidance counsellor until 1974. He was one of the early members of the Institute of Vocational Guidance and Counselling, and he contributed regularly to ‘The Counsellor’ magazine. In 1975 he took some time out, for personal reasons, and worked as a salesman selling cloth, ‘a disastrous mistake’, he later acknowledged. Fr Jim was a popular member of the Vincentian community, being easy going and approachable. His educational background and his skills, his insight and sensitivity equipped him well for his work at St Paul’s College.

In 1976 Fr Jim Duffy CM was appointed to London and joined the team of Vincentian priests at Damascus House, Mill Hill, engaged with retreats and courses for priests, religious and lay people and for school children on retreat days. Fr Jim was also involved with some parish missions. The death of his mother in January 1979, sixteen years after the death of his father, was hard for him. From 1979 until 1984 he was given permission for leave of absence. He needed time for personal vocational discernment. During this period of his life, he helped some friends who had a small hotel in the west of England. He then took employment with the International Red Cross, working at their main office in central London and was promoted to Director of Operations. Going to Mass and saying his prayers remained important for him. After a retreat in Stroud followed by a holiday and the sale of his flat in Hammersmith, Fr Jim returned to priestly ministry, this time in a parish of the Diocese of Westminster. He was appointed Assistant Priest at Sacred Heart, Ruislip where he served from 1984-87. He was then appointed Parish Priest at Our Lady Help of Christians, Rickmansworth. Fr Jim felt at home in the Diocese of Westminster and he applied for incardination as a priest of the Diocese. With the support of his Vincentian superiors, he was incardinated on 10th May 1995. In 1999 it was put to Fr Jim that he might move from Rickmansworth to take up an appointment at the diocesan seminary in Chelsea, but in a letter to Cardinal Hume he made it clear that this would not suit him. In 2002 there was the suggestion that Fr Jim might be appointed to another parish. He was not keen to move, and wrote to the Vicar General of the time, ‘I like this parish, and I am sure the people like me’. He described his priesthood as ‘the type of priesthood that seeks to build up a loving and caring community supported by the sacramental life of the Church’. In 2006 he was given additional responsibility for the parish of St John Fisher, Chorleywood. He retired in 2013 at the age of 75, after 26 years at Rickmansworth, and went to live on Merry Hill Road in Bushey, a two-storey house with a garden, provided by the diocese, where he was very happy and content. He continued to provide supply ministry, greatly appreciated by priests in Hertfordshire.

Fr Jim, a priest committed to the teachings of Vatican II, lived simply and did not amass possessions. He bought what he needed from charity shops, always mindful of the poor and disadvantaged. He was quiet and reserved, and described himself as somewhat of a loner. Yet he was able to reach out to people with much warmth, charm and humour when helpful. He had particular concern for those who were ill and those who were homebound. He made visiting the sick, in their homes or in hospital, a priority, giving of his compassion and time generously. His dealings with authority were not always easy and on occasion his communication could be brusque. In 1986 in a letter about the possibility of moving from Ruislip parish he wrote, ‘Power and prestige do not interest me…I seek only to be taxed in the service of God’s people.’ The dignity of the Church’s liturgy was important to Fr Jim, he was fastidious but not fussy and did not rush through Mass. He was often seen in church praying the Breviary, the Prayer of the Church, and this carried on into retirement. He died peacefully at Watford General Hospital on 28th December, having suffered a stroke requiring emergency treatment two weeks earlier. May this faithful priest, who served parish communities collaboratively, rest in peace.

Grant, we pray, O Lord,
that the soul of Fr James, your servant and priest,
whom you honoured with sacred office
may exult forever in the glorious home of heaven.

May the soul of Fr Jim, and the souls of all the faithful departed, rest in peace. Amen.