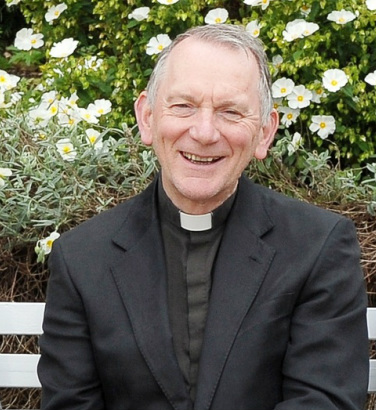 We share the sad news of the death yesterday evening, the Second Sunday of Easter (of Divine Mercy), 19th April, of Fr Antony Francis Maximillian Conlon. Fr Tony died peacefully at the Sue Ryder Hospice in Reading where he had been receiving end of life care.

Fr Tony was born in Dublin, Ireland on 14th July 1947 and ordained to the priesthood for the Diocese of Westminster at Westminster Cathedral by Cardinal Basil Hume in May 1979.

Sympathy is extended to Fr Tony’s family and friends, and to the clergy and parishioners of his former parishes in this diocese and in the Archdiocese of Birmingham where Fr Tony served as Parish Priest at Goring-on-Thames and previously at Woodcote, and to those who remember him from his ministry as Chaplain at the Oratory School, Reading.

Fr Tony was a member of the Deceased Clergy Association.

We pray for the repose of Fr Tony’s soul:

Almighty and eternal God,
hear our prayers for your son, Fr Tony
whom you have called from this world to yourself.
Grant him light, happiness and peace.
Let him pass in safety through the gates of death,
and live for ever with all your saints
in the light you promised to Abraham
and to all his descendants in faith.
Guard him from all harm
and on that great day of resurrection and reward
raise him up with all your saints.
Pardon his sins and give him eternal life in your kingdom.
We ask this through Christ our Lord.
May the soul of this faithful priest rest in peace. Amen.
Obituary:

Westminster Diocese was fortunate that Antony Conlon made his home in London. Born in Dublin on 14th July 1947, after leaving school he went to live in Liverpool before coming to London in his teenage years. Westminster Cathedral became his spiritual home and his vocation to the priesthood developed, in part at least, due to his involvement as an altar server. His formation for the priesthood began in 1972 when he went to the Royal English College of St Alban, Valladolid in Spain and then to Allen Hall Seminary. As a deacon he served in the Parish of Ss Sebastian and Pancras, Kingsbury Green. He was ordained to the priesthood on 26th May 1979 in Westminster Cathedral by Cardinal Basil Hume. He did further studies, in Church History, while at the Venerable English College in Rome from 1985 to 1988.

Fr Antony’s first appointment was to Our Lady of the Rosary, Marylebone as Assistant Priest where he served from 1979 to 1983. He then went to Our Lady of Hal, Camden Town as Assistant Priest until 1985. On his return from Rome Fr Antony was appointed Assistant Priest at St Mary’s, Cadogan Street in Chelsea where he served from 1988 to 1991. He was then appointed Parish Priest at St Joseph’s, Bunhill Row, a church much in need of restoration. Fr Antony lost no time in attending to the fabric and decoration of the church, making it attractive to parishioners and attracting greater numbers to the church.

In 2001 Fr Antony was appointed Chaplain to the Oratory Schools Association in south Oxfordshire, founded by St John Henry Cardinal Newman and comprising of the Oratory School and the Oratory Preparatory School. Fr Antony enjoyed the thirteen years spent there, described by friends as perhaps the happiest years of his life. He involved himself with all aspects of school life: academic, sport, music, drama and especially the faith life of the school. He engaged with the students, parents, staff and governors. Major celebrations included the school’s 150th anniversary Mass in 2009 and the beatification of John Henry Cardinal Newman the following year. Pilgrimages to Lourdes and Rome with students, the annual Confirmation Mass and Corpus Christi procession, the Advent Carol Service and other celebrations of the liturgical year were highlights of Fr Antony’s ministry. The daily round of Masses, prayer, teaching, listening and counselling gave Fr Antony much satisfaction in his role of assisting the growth and development of the students, especially in their relationships with the Lord, the Church and with each other. While at the Oratory School Fr Antony prepared several members of the school community of students, parents and teachers for baptism, reception into the Church and confirmation. Although busy, or perhaps because he liked to keep busy, Fr Antony undertook research for a doctoral thesis on the Counter-Reformation in England, supervised by London University, and was awarded PhD in 2013.

As the time approached for Fr Antony to move on from the Oratory School he wrote to Cardinal Vincent, ‘I am strongly drawn to the idea of continuing the remainder of my active pastoral ministry within this region. Immediate members of my family are close by…I have established bonds of fraternity and friendship with local clergy and families…’ With the consent of the Archbishop of Birmingham Fr Antony asked Cardinal Vincent Nichols for permission to resume parochial ministry in the parish of Our Lady and St John, Goring-on-Thames also serving Christ the King parish, Woodcote, not far from the Oratory School. Permission was given and Fr Antony was appointed Parish Priest in 2014. He was conscious of some health issues but he remained busy, with sixteen villages in the parish. The parishioners’ spiritual needs benefitted from Fr Antony’s pastoral zeal. He saw the need for a new parish hall, and other needs, and he gave his time and energy to this until the effects of his illness necessitated moving to a hospice for end of life care.

Throughout his adult life Fr Antony was involved with the Sovereign Military Order of Malta, founded in Jerusalem in the 11th century. The Order’s motto is Tuitio fidei et obsequium pauperum, defence of the faith and assistance to the poor, both of these were close to Fr Antony’s heart. He became a member in 1971 with the encouragement of William Anthony Viscount Furness who was well known to the Cathedral clergy and to many parishioners. Fr Antony was appointed a Chaplain to the Order in 1980 and was appointed Principal Chaplain of the Grand Priory of England at its restoration in 1993, serving in this role for 27 years until his death. Also in 1993 he was a delegate at the International Eucharistic Congress held in Seville, Spain and in Wrocław in 1997.

Fr Antony had a deep appreciation for the Church’s history and tradition. The tradition of prayer, liturgy, apostolic ministry in the service of the people of God motivated Fr Antony. He had his preferences concerning the way in which the Church’s liturgy is celebrated, and he took great care in the celebration of Mass with deep devotion to the Eucharist evident. He had a strong interest in, and indeed preference for, the Extraordinary Form of the Mass. He was called on by the Latin Mass Society on many occasions, serving as their National Chaplain until 2009. The life and work of the Church brought him into contact with a wide variety of people, whether in parishes, schools or on pilgrimages. He enjoyed music and theatre, reading and study. He grew closer to his family following the discovery of his family roots. He had an endearing personality, he was serious yet easy company and fun to be with. His focus was on the Lord and the people whom he served with compassion as a priest.

In September 2018, at the age 71, Fr Antony completed and returned to the Diocese of Westminster his ‘retirement planning form’. He had hoped to retire ‘within the next four years’, and to involve himself with supply ministry to assist in local parishes and to continue to support the work of the Order of Malta. He wanted to live in the area he had become familiar with, remaining close to his three sisters and his friends. Sadly, it was not to be. Fr Antony became ill and received treatment from January 2019. He was optimistic about this but later in the year received news that his condition was terminal. In the last months of his life his courage and prayerful acceptance of his situation was an inspiration to many people. He spoke of his readiness to go to God, and of his gratitude for the life he had lived.

Fr Antony died peacefully at the Sue Ryder Hospice in Reading on 19th April. Fr Antony’s graveside funeral took place on 5th May at Goring on Thames Cemetery with Fr David Elliott, of the Ordinariate of Our Lady of Walsingham, presiding.

May he rest in peace and rise in glory.