Festival of Eastern Catholic Churches hosted in the Diocese 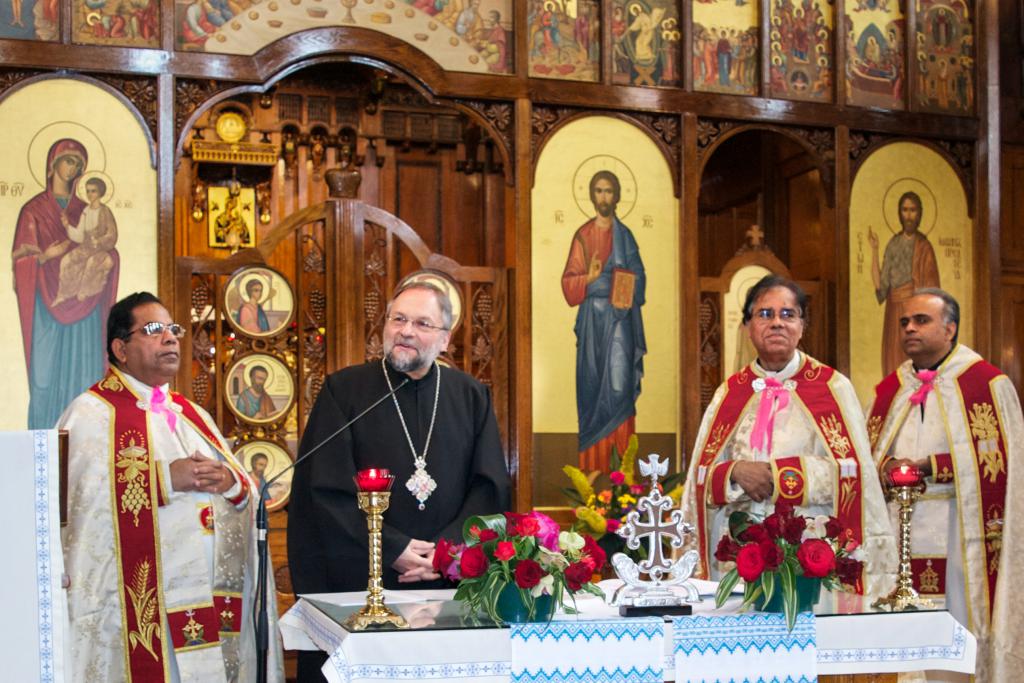 On Saturday 1 August the Diocese was host to the Festival of Eastern Catholic Churches, held at the Ukrainian Catholic Cathedral and organised by the Society of St John Chrysostom. The festival, the first for decades, brought together 70 clergy and faithful of the Catholic Church in both East and West, all sharing in full communion with Rome.

The day provided a unique opportunity to experience a broad range of the Church’s liturgical riches, including the celebration of the Holy Qurbana in English, led by the Syro-Malabar Catholic Church whose direct origins are in the apostolic Church founded by St Thomas. The Mass, again in the Syro-Malabar rite, was presided at by Fr Joseph Palackal, who had devised a new setting in English. Afterwards Fr Joseph presented two films to show how the Christians of India still use the language of Christ brought to them in the first century, along with the Syriac music tradition from the Holy Land and Persia. The day was concluded by Byzantine Vespers, served by Fr Mark Woodruff, Vice Chairman of the Society of St John Chrysostom and a priest of the Diocese of Westminster.

Commenting generally, Fr Mark said: “Father Joseph has shown us that just as the Latin Roman Catholic Church has spread throughout the world in history, now the Eastern Churches likewise are found everywhere. This shows not only the diversity of Catholic communion, but also that the Eastern Churches are integral to the Catholic Church’s life here, its faith and increasingly its identity. As they grow, too, they are part of a richer presentation to wider society of Christ’s Kingdom. Uniting the patrimony in art, language, liturgy and music from an historic Church with English for the future in a new environment, is vital and teaches us much about how to be the Church in the world.”

As well being liturgically rewarding the afternoon included reflection on the challenges facing our brothers and sisters elsewhere. John Newton spoke about the presence of Aid to the Church in Need (ACN) in the Middle East, helping the local Churches to survive and care for those in need and destitution because of the atrocities in Syria, Iraq and Lebanon and persecution of Christians. A total of £1,500 for ACN’s work was collected on the day.

The Society of Saint John Chrysostom, founded in 1926, works to promote greater appreciation of the spiritual, theological and liturgical traditions of Eastern Christendom, the support of Eastern Catholic Churches and the union of the Catholic and Orthodox Churches.

Every second Saturday of the month, 4pm, at the Ukrainian Catholic Cathedral, London, a Divine Liturgy is served in English, fulfilling  the Sunday obligation. All are welcome to attend the Divine Liturgy, at which Catholics may receive communion and afterwards the blessed unconsecrated bread (antidoron) is offered to all.

For more information about the Society of Saint John Chrysostom and Eastern Catholic Churches in the United Kingdom, please visit: www.orientalelumen.org.uk