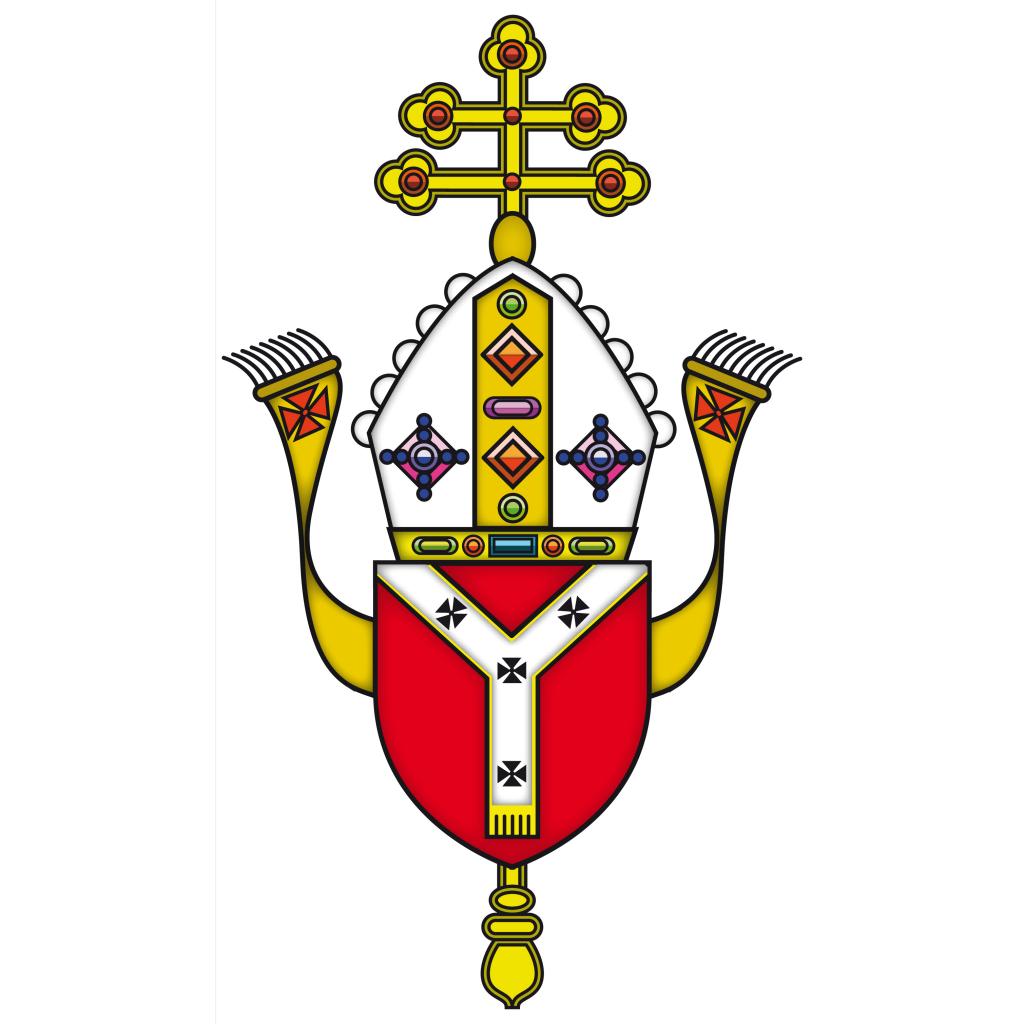 On 2 April the Diocese of Westminster launched a new coat of arms, to identify the diocese on documents, publications and in its online presence. Below is a short history of diocesan heraldry, do’s and don’ts of coats of arms and a fulsome Roman decree of 1904 aimed at circumventing the restrictions of the English College of Arms written by Fr Peter Wilson, parish priest at St Pius X, St Charles Square.

Heraldry is both a fun pastime and a serious business. The origins of heraldry lie in the need to distinguish combatants in the days when helmets hid faces. Shields were decorated with distinctive colours and emblems. However, from early times the Church began to use heraldry as well, religious symbols replacing military elements. 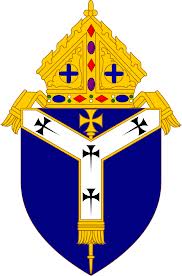 Coat of Arms of the Diocese of Canterbury

In this country the use of coats of arms can be traced back through seals on documents from bishops, abbeys, cathedrals and so on. The arms of the Diocese of Canterbury date back to 1349 on the seal of the Archbishop, appearing soon after in manuscripts and even windows. They show a pallium (given by the Pope to Metropolitan Archbishops) with a simple processional cross behind it on a blue shield. These have not changed to this day.

Two papal decrees control modern Church heraldry: Inter Multiplices of Pope St. Pius X (1905) and Ut Sive of Pope Paul VI  (1969). The decree of St Pius X dealt with rank on coats of arms, chiefly the tasselled hat (‘galero’) which in ecclesiastical heraldry replaces the military helmet. The colour and number of tassels would indicate the rank of the bearer. Pope Paul’s decree suppressed the use of mitre and crosier, beneath the galero, on the arms of bishops. They were replaced by a processional cross, one crossbar for bishops and two for archbishops. Henceforth the mitre would be displayed on the diocesan arms, whilst the galero would be personal to the bishop.

In addition to this, if a diocese has a coat of arms the bishop has the privilege of placing his own personal arms alongside those of his diocese on his coat of arms. This is known as “impaling”. Usually those then become the arms used in all diocesan documents and is the reason why we change our coat of arms each time the Archbishop changes. Cardinal Nichols decided not to follow this route when he first became Archbishop, and what we had instead was the diocesan shield surmounted by an Archbishop’s green galero – which was not strictly speaking correct as the hat was the Archbishop’s and the shield was the diocese’s.

From the Reformation onwards the Catholic Church in England was severely circumscribed in what it could do. A Catholic Diocese is still not recognised as a legal entity and the College of Arms, the proper authority, will not make a grant of arms. So Cardinal Vaughan in 1904 applied to the Holy See for a grant. The decree from Rome read as follows:

DECREE   The Most Eminent and Most Reverend Lord Cardinal Herbert Vaughan, Archbishop of Westminster in England, made a request to this Sacred Congregation for Propagating the Faith that there should be granted to the celebrated Archdiocese of Westminster as its own arms those which the old Catholic Archbishops of Canterbury used, with the colour of the field changed from blue to red in memory of the Martyrs who adorned that Church with their most noble blood. His Holiness graciously deigned to assent, allowing the Archdiocese of Westminster in England to have as its own Arms the sacred Pallium hanging from the upper corners of the shield on both sides, with the archiepiscopal cross of gold in pale, on a red field; and likewise allowing the renowned and Most Eminent Archbishop authority to bear the said Arms in combination with his own family shield, together with the motto Amare et Servire (To love and serve) he then ordered the present Decree to be completed. Given at Rome, at the House of the Sacred Congregation for Propagating the Faith on the 30th day of June 1894.

There is a nice bit of heraldic controversy here, since the “arms which the old Catholic Archbishops of Canterbury used” predated the use of a double-barred cross for Archbishops. The decree, however, stipulated that there should be an “archiepiscopal cross”. When Cardinal Vaughan went to Rome in 1895, he wrote “I have been required here to put two bars to the cross on the Archiepiscopal Shield: it is the universal custom here and they won’t listen to the heralds”. 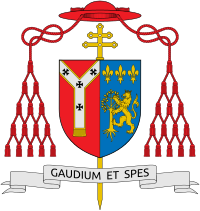 Previous Coat of Arms of the Diocese and of

When Archbishop Bruno Heim designed arms for Cardinal Basil Hume he tried to resolve this by replacing the cross on the shield with afleur-de-lys, placing the archiepiscopal cross behind the shield. However, Archbishop Heim could not simply change the arms of the diocese as he had done. And the person who designed the arms of Cardinal Cormac Murphy-O’Connor resorted to having just a pallium, with no cross, again placing the archiepiscopal cross behind the shield.

The new decoration we have just adopted follows this lead. It is not strictly speaking the diocesan coat of arms and could probably best be described as a badge: that is, it takes heraldic elements and uses them as an identifying mark.

The red shield with the pallium is there, with the archiepiscopal cross behind the shield and a rather handsome mitre as covering, indicating the diocese rather than the Cardinal Archbishop.