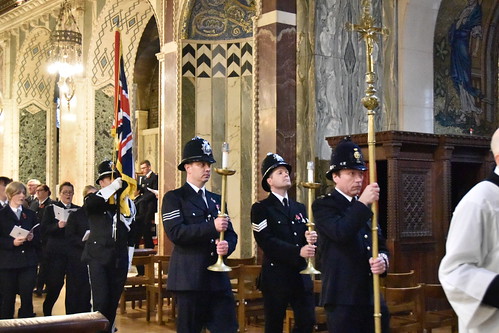 Police officers and police staff who have died were remembered at Westminster Cathedral on 6th November 2019. The 96th annual solemn requiem Mass for all deceased police officers and staff was organised by Fr Barry Lomax, National Chaplain to the Catholic Police Guild.

In his written introduction in the order of service, Fr Barry shared the following words:

‘Our Mass of Requiem celebrated around this time every year affords that moment to reflect and remember both officers and staff who have made the ultimate sacrifice. “Greater love hath no man than this, that a man lay down his life for his friends.” (John 15:13).’

After the processional hymn, police officers presented two police headdresses and a wreath to the Bishop. These were placed on the sanctuary for the duration of the Mass.

The music during the Mass was provided by the Metropolitan Police Choir under the direction of Richard Fox.

After Communion, The Last Post was played followed by two minutes of silence. The congregation then sang The National Anthem, led by the Metropolitan Police Choir.