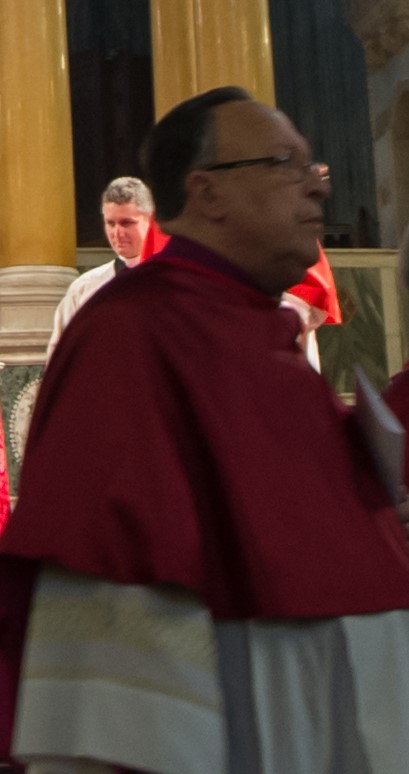 With sadness, we announce the news of the death, this morning Sunday 14th June, the Solemnity of Corpus Christ, of Canon Vincent Berry.

Canon Vincent died peacefully at home, his sister Anne with him, where he had been living in retirement in Weston Turville, Aylesbury.  He retired in October 2017, from the parish of Corpus Christi, Tring having served there as Parish Priest since 2006.

Born in London on 25th September 1937, he was ordained to the priesthood at Westminster Cathedral on 24th May 1962.

Sympathy is extended to Canon Vincent’s family and friends, and to his former parishioners in Hounslow, South Harrow, Westminster Cathedral parish, Hendon, Chelsea and Tring.

Canon Vincent was a member of the Deceased Clergy Association.

We pray in thanksgiving for Canon Vincent’s life and ministry, and now for the peaceful repose of his soul.  From the sequence of today’s Mass:

Come then, good shepherd, bread divine,
still show to us thy mercy sign;
oh, feed us still, still keep us thine;
so may we see thy glories shine
in fields of immortality.

Oh thou, the wisest, mightiest, best,
our present food, our future rest,
come make us each thy chosen guest,
co-heirs of thine, and comrades blest
with saints whose dwelling is with thee.

May Canon Vincent rest in peace.

To the late Richard and Anne Berry, parishioners of St Paul the Apostle parish, Wood Green five children were born.  Richard and Anne were exemplary parishioners, deeply committed to the life and work of the parish and the wider Church. Their first born was Vincent, on 25th September 1937. He was to be blessed with four sisters. Educated at St Paul’s Primary School then St Ignatius College, Enfield, the faith into which Vincent was born, and nurtured at home, in the parish and schools he attended, led him to offer himself to the Diocese for formation as a priest. He was accepted as a candidate for the priesthood and went to Allen Hall, St Edmund’s College in Ware, Hertfordshire in September 1956.

Vincent is remembered as a seminarian, and later as a priest, for his calmness and practical approach to situations, always seeing the positive in people and their circumstances. During the summer, while a seminarian, Vincent assisted at a summer camp organized by the Society of St Vincent de Paul for disadvantaged children. At Gosfield Lake in Essex he was head cook, responsible for feeding 120 boys and volunteers three times a day. Occasionally the food burnt – and Vincent did not escape being burnt – but he remained characteristically calm but with only a moment of annoyance, revealed by the mild expletive ‘blast’. He was admired for his ability to remain tranquil as chaos raged around him. As a priest this quality was evident in the relationships he formed with parishioners and fellow-priests, and with those in authority. Canon Vincent made time for people, never seeming to be in a hurry but unfailingly gentle and receptive to people to whom he would listen with interest and patience. Calmness and interior peace helped him to cope with the diagnosis and then the prognosis that led to his death on Sunday 14th June, the Solemnity of Corpus Christi, peacefully and in his own home where he had enjoyed three years of retirement, with Anne his remaining sister, at his side.

Vincent Berry was ordained to the priesthood on 24th May 1962 at Westminster Cathedral. The following day he celebrated his first Mass at St Paul’s, Wood Green. His first appointment was to the parish of Hounslow as Assistant Priest, from 1962 to 1968. He then went to work with the Crusade of Rescue, alongside Canon (later Bishop) Philip Harvey and Canon John McDonald, where he remained until 1970. This was followed by two years as a member of the diocesan Mission Team, based in Poplar and assisting with parish renewal across the Diocese helping to implement the teaching and practice of Vatican II to which he was deeply committed.

Canon Vincent left Chelsea in 2006 to take up his next and final appointment as Parish Priest at Corpus Christi, Tring where he remained until October 2017. While at Tring Canon Vincent oversaw building and refurbishment projects, and brought people together for the good of the parish and gifted the church with the beautiful cross suspended above the altar. On 23rd September he wrote to Cardinal Vincent, ‘On 25th September 2017 I shall be eighty and I think that milestone should also be the time for me to retire. I am really happy here but I think the time is approaching when someone else should take charge.’ The Cardinal presided at the Mass of Thanksgiving in Tring on Sunday morning, 24th September, followed by a party. Canon Vincent then went to live in his own home in Weston Turville near Aylesbury. He continued to attend diocesan events, despite illness, and was determined to live life to the full.

Canon Vincent’s life as a priest for 58 years was modelled on the example of Jesus, the Good Shepherd. He cared for, and about, the flock entrusted to his care in the diverse parishes he served. In addition to parochial ministry he served the Diocese as a member of the Marriage Tribunal, bringing compassion, healing and hope to those whose marriages were difficult and painful. He brought the same spirit of compassion and care to his work with the Crusade of Rescue. Compassion and care for priests were also features of his three years of service to the Diocese as Vicar General, years which he described to a successor as not the easiest for him. A desire to remain

calm prevented him from saying more! Canon Vincent also served as Episcopal Vicar for Eastern Catholic Churches, from 1971 to 2011, and as a trustee of the Society of St John Chrysostom, founded to encourage greater knowledge, understanding and appreciation of the Eastern Churches. As a member of the Metropolitan Chapter, Canon Vincent was dutiful and conscientious. He served as Secretary and was assiduous with minutes and always good company at the annual Chapter Dinner.

Canon Vincent’s interests included cricket, meals out with family and friends and travel for holidays and to visit his siblings overseas. He also enjoyed rugby union – it was a great joy to him that he was able to go with a couple of parishioners from Tring to Twickenham on 23rd February this year to witness the England vs. Ireland game. England won.

Canon Vincent was clearly his parents’ son, his life immersed in the Vatican II-inspired teaching and practice of the Church at parish level and in the Diocese and beyond.