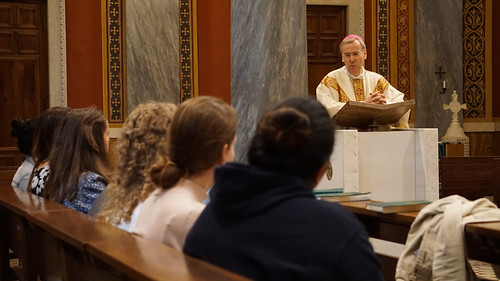 After the tour, the pilgrims viewed an exhibition hosted by the Venerable English College and the British Embassy to the Holy See. The exhibition, ‘John Henry Newman: A Saint in Rome’, explored the significance of St John Henry Newman’s four visits to Rome which he made at different stages of his life.

Bishop Nicholas presided at the Mass, with Fr Mark Walker (Youth Chaplain for the Diocese of Westminster) and Fr David Reilly (parish priest at Our Lady of Lourdes, New Southgate) concelebrating. In his homily to the pilgrims, Bishop Nicholas began by invoking one of St John Henry Newman’s famous sayings, the assertion that, ‘Priests are not all angels!’. Bishop Nicholas explained how, for Newman, it is the humanity of priests that enables them to have compassion and sympathy for the people they serve.

‘The generations of men who trained at the Venerable English College knew themselves not to be angels either.

But they felt a deep sense of mission.

This was a common bond; something that united them.

And they felt this same bond, those who came after him, with Newman too, endowed as he was with a deep sense that God has created each one of us “for some definite service”.

Bishop Nicholas also spoke about St John Henry Newman’s multiple experiences of failure when trying to live out his ‘definite service’. He gave three examples of how Newman’s biggest defeats led him to create some of his most celebrated work, ‘The Idea of a University’, ‘An Essay on the Development of Doctrine’ and the hymn, ‘Lead, Kindly Light’.

‘I was thinking too of all the criticisms Newman experienced in his lifetime and which must have seemed such formidable setbacks.

And yet the lesson in this for him and for us is that he was to find, time after time, that great good came from what appeared the worst defeats.’