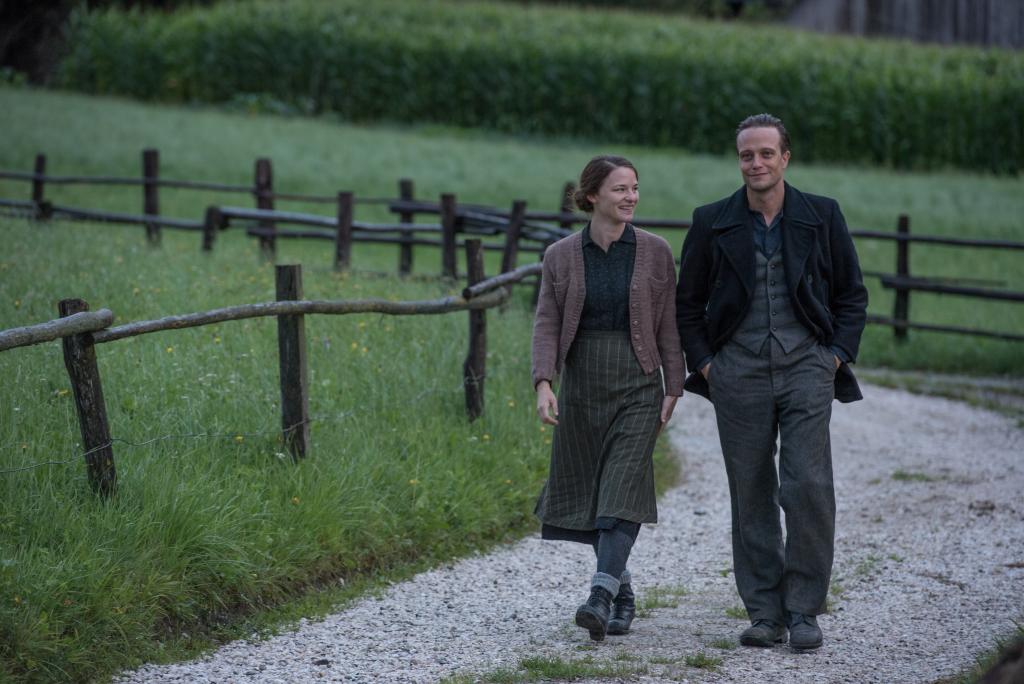 Last week I was invited to a private viewing of A Hidden Life. This deeply moving film, directed by Terence Malick, presents the struggle of Blessed Franz Jägerstätter to live his decision in conscience and refuse to take the military oath to Hitler. Franz Jägerstätter was born on 20th May 1907 in St Radegund, Upper Austria in the Diocese of Linz. This is a graphically powerful film which focuses on the intensity of the love between Franz and his wife Franziska, the hard work and beauty of the village life, and the brutality and oppression of the Nazi regime in Austria. In the midst of this we see the struggle of Blessed Franz to be true to his religious views and his view that it is incompatible to give allegiance to God and Hitler. 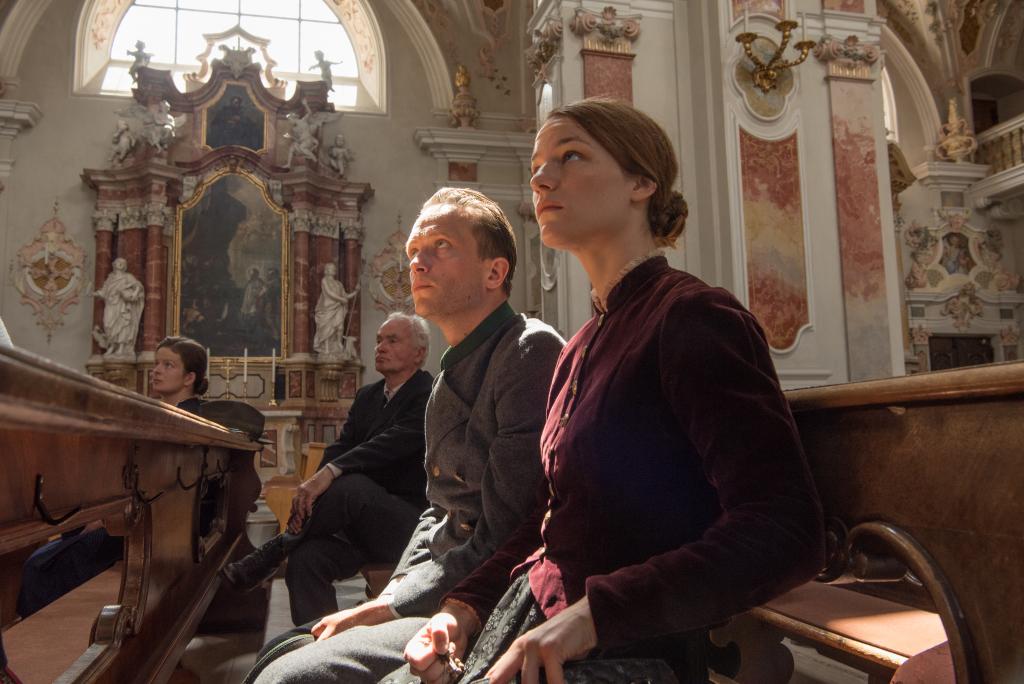 Not only in prayer but also by a dream is this conviction intensified. He dreams of a train hurtling along railway tracks and is convinced that this train is racing towards hell. People must jump off in order to be saved. He understands the train as a symbol of the Nazi tyranny which he must oppose and from which he must stand apart.

From the outset Franz is convinced that he cannot serve two masters, God and the Nazi regime. He struggles in his conscience about what to do. He prays, he broods, he is silent, yet from the depths he comes to the conviction that, ‘I will not do what I know to be wrong.’ Many of the parish and village oppose him, the bishop he consults tells him that he must care for his wife and fight for his country. As Franz becomes clearer in his conviction, he meets more opposition from his fellow villagers.

Three times he is called up for conscription. On the first two occasions the authorities in his home village save him and manage to bring him home exempted from military service on the grounds of being a land worker. As the Nazi tyranny grows harsher, Franz is more isolated. The daily postman cycling down the path towards his house becomes an ominous sign: will he be called up or not? The third time he is taken to military service there is no return.

Blessed Franz came to his decision in prayer. Although not a part of the film, it is important to recognise that there was much opposition to the Nazis in the Diocese of Linz. The former Bishop of Linz, Bishop Johannes Maria Gföllner (1915-1941), had spoken out strongly against the Nazis and refused to meet Hitler in 1938. He asked for Pope Pius XI’s encyclical Mit Brennender Sorge ('With burning concern', on the Church and the German Reich) to be read from the pulpits of his diocese in 1937. He argued against the popular vote following the Anschluss. Fr Josef Karobath, the priest of St Radegund, was arrested in 1940 having spoken against the regime and became a witness at that time for the village. However later attitudes changed. From the Diocese of Linz, about 40 priests were sent to concentration camps, where 11 died. (11% were imprisoned at one time or another.) From Blessed Franz’s deanery, eight out of ten or eleven priests were arrested. As well as the dream and in his prayer, these voices also helped to educate and form Blessed Franz’s conscience. With courage he came to the decision that he could not be both a Nazi and a Catholic and so refused to take the military oath to Hitler.

Franz was beatified in 2007. Pope Benedict said at the Angelus in 28th October 2007 that the example of Franz Jägerstätter ‘testifies that Baptism commits Christians to participating courageously in the spreading of the Kingdom of God, if need be cooperating with the sacrifice of life itself’. At the Second Vatican Council, through the influence of Archbishop Thomas Roberts SJ of Bombay, the Council said, ‘It seems right that laws make humane provisions for the case of those who for reasons of conscience refuse to bear arms, provided however, that they agree to serve the human community in some other way.’ (Gaudium et Spes 79). This was achieved through the witness of Blessed Franz Jägerstätter and other martyrs.

The challenge to each one of us is to sharpen our conscience to the call of God in particular situations, humbly to allow the teaching of Christ and his Church to shape us, to free ourselves from complicity in evil and to witness to others inspired by the example of Blessed Franz Jägerstätter. Respect for human persons is paramount: the dignity of unborn life, avoiding buying goods that abuse workers who are subject to human trafficking or modern slavery, caring for creation, and desiring step by step to be nonviolent in a violent world. 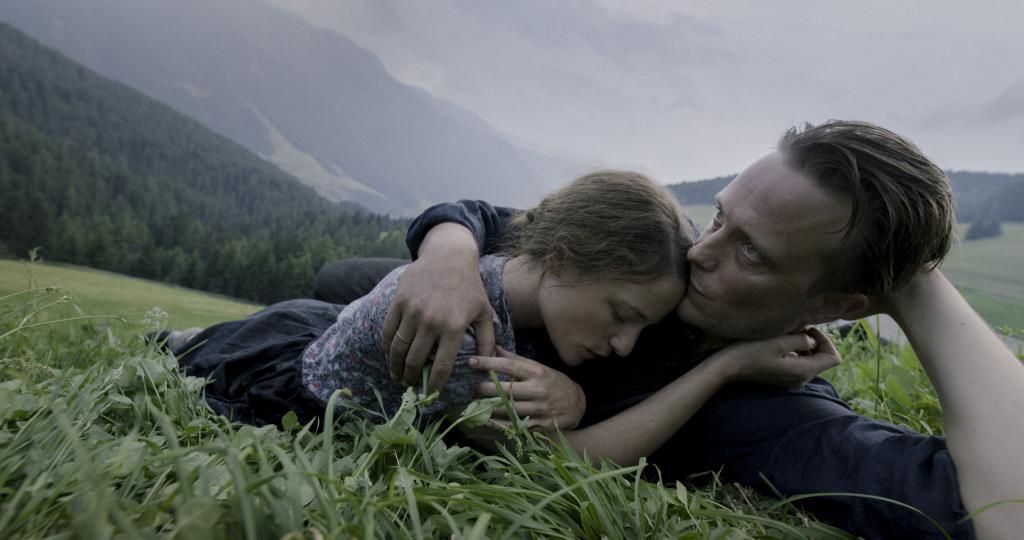