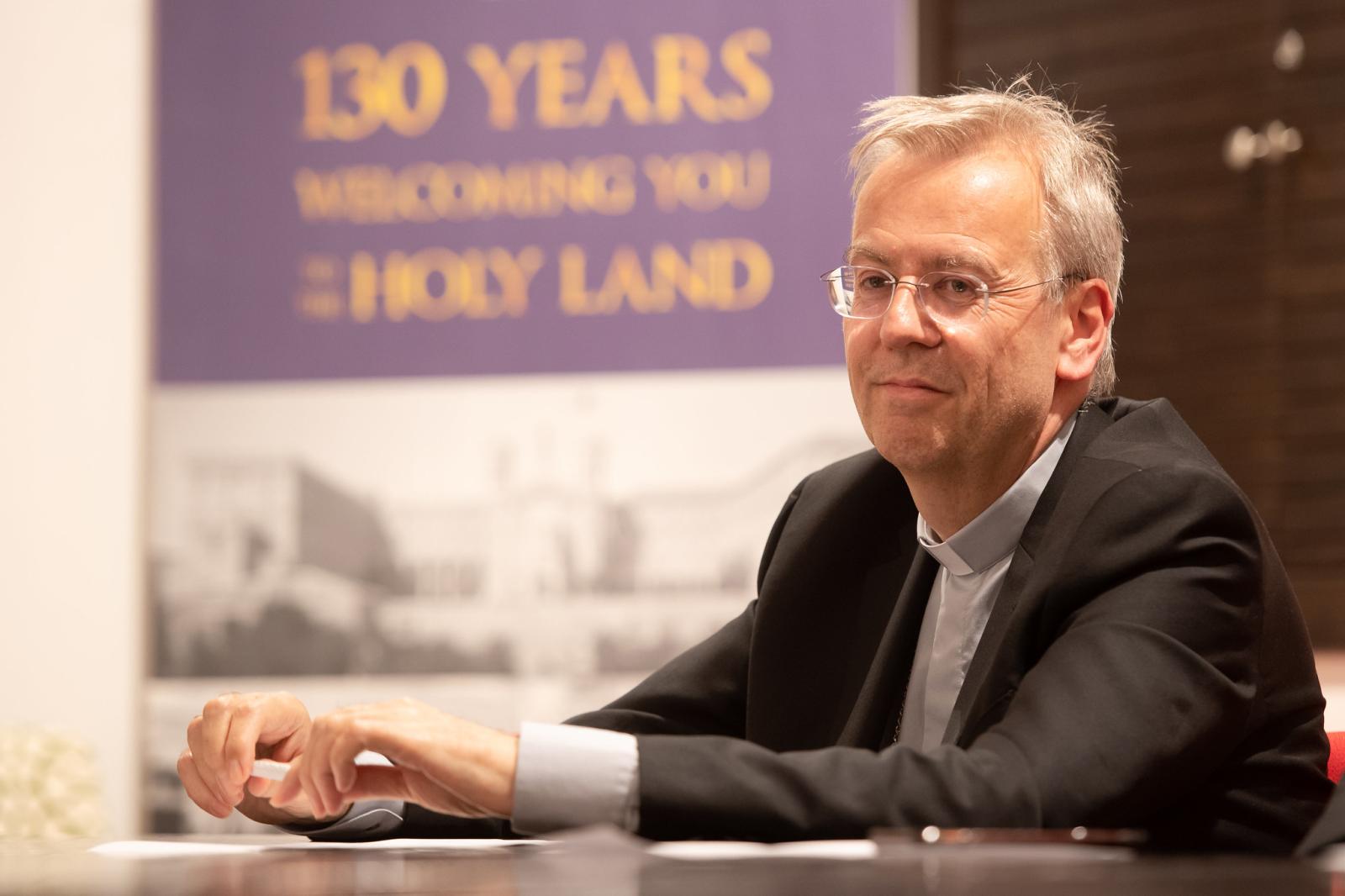 Bishop Nicholas Hudson, a long-term bishop delegate of the Holy Land Coordination, has been named the new chair of the group.

The Holy Land Coordination, made up of bishops from across Europe, North America and South Africa, was set up at the end of the twentieth century at the invitation of the Holy See. The purpose was to visit and support the local Christian communities of the Holy Land.

The bishops are present every year, and by their presence they hope, above all else, to remind the ‘living stones’, the Christians of the Holy Land, that they are not forgotten by their brothers and sisters in other parts of the world.

Bishop Nicholas' predecessor in the role, Clifton Bishop Declan Lang, stood down at the end of the May 2022 Coordination.

In an interview given from a rooftop overlooking the holy city of Jerusalem, Bishop Nicholas talked about his previous visits to the Holy Land and why he’s so passionate about the region and its people.

Bishop Nicholas Hudson, standing here with me in this holy city, looking out across Jerusalem, and it’s a beautiful view, actually, in a city that means so much to us. You’re here as part of the Holy Land Coordination and you’ve been here half a dozen times or more now. Tell us where your passion comes from for this wonderful place…

I think I’ll always remember the first pilgrimage I came on when we visited Bethlehem and Jerusalem, and I was deeply, deeply touched by it. It had more of an impact on me than I even expected, really, to be in the places that we don’t just associate with, but actually are the places of Jesus’s life, Passion, death and Resurrection. And it was deeply powerful.

Meetings with people making a really big difference in society, those on the margins, whether it’s migrants, asylum seekers, the undocumented, those have no status in this country; these are very important meetings. But it is actually those parish visits, isn’t it? Standing alongside people, learning from them and understanding them a little bit more, understanding the pressures on their lives. I found that the most moving aspect, despite the fact that both components are important.

That’s very well said. There’s something deeply touching, not least the fact that you’re aware in some places that the parish communities have become quite small. And when, with respect and gentleness, you talk to the parish priest about it, he’ll tell you, well, yes, a lot of families left because they felt they needed to plan for their children’s future. But one of the signs of hope that we’ve seen during this Holy Land Coordination is the number of people, especially young people, who are saying, 'whatever happens, we’re going to stay'. Now, that’s a very significant statement for us to be hearing out of Palestine’s Christian community, and we’re going to have to see to what extent that remains a possibility for them.

The other thing that I find really touching, is when we actually go and pay visits to some of the communities who are being cared for by members of those parish communities. I think a real highlight was when, a few years ago, we were in Bethlehem and we went to visit L’Arche.

L’Arche means the Ark, Noah’s Ark, and is a community founded about 60 years ago to welcome people with learning disabilities. There’s a centre just behind the Nativity Grotto very, very close to where Jesus was born, in Bethlehem. What I find really impressive about it is that it’s a mixed Muslim and Christian community. There in the heart of Bethlehem, they’re welcoming Muslim and Christian people with disabilities and really giving them life. The name of this community in Arabic is Ma’an lil-Hayat, which means ‘together for life’ and that really is part of the essence of what L’Arche is. L’Arche says to someone with learning disabilities, you can stay with us forever.

On another occasion we visited one of the sites which is thought to be the place of the Emmaus story called Abu Ghosh. Emmaus may have actually been in one of three places, but Abu Ghosh is one of the places where the story is revered. And I was so touched that alongside the church was another home where women, many of whom have learning disabilities, are welcomed and, again, they’re being valued and given life. We had another experience of going to a refuge for children of migrant workers. So there’s a great deal of Christian social outreach taking place and it truly warms one’s heart.

It has been said, but it probably bears being said once more, that a lot of the Christian charity projects aren’t just for Christians, are they? This is a complicated region in many ways, a beautiful one, but a complicated one. You must be heartened, as a bishop, to see the Christian communities under pressure, providing for way more than just themselves.

I really am, and I think this is certainly a feature of those communities I’ve mentioned, but it’s writ large in the schools, the Christian schools under the care of the Latin Patriarchate, where they are truly open to having Muslims who want to send their children there. One hears from Muslims who do send their children to these schools something similar to what we hear from Muslims who want to send their children to our Catholic schools in England and Wales. That is 'we like your values' and implicitly, therefore, 'we want those values to communicate themselves and be communicated to our children'. So it’s writ large, particularly in the schools, yes.

Now, it would be remiss of me not to point out that this is a bustling, busy, chaotic city. We can hear the trams, we hear the noise, we hear the beautiful bells, and, to be honest, the muezzin, the Islamic call to prayer, the Jewish life and culture is imprinted all over the city as well. It is a lovely place, but many people in England and Wales may not be able to come here. It’s not easy to come here. What would you say to them in terms of bringing a little bit of these holy lands back to England and Wales?

Well, I’d want to say straight away, that Jerusalem belongs to all of us, and there are 13 Christian denominations in Jerusalem, and it belongs to all Christian men, women and children. But we have to be careful when we say that and how we say that. Because one of the lessons of this Coordination, which has been focusing on Jerusalem the city, as a sacred city, is that we’ve been sensitised to the fact that we’re not the only ones who say 'this is our city'. The Jews say 'this is our city', the Muslims say 'this is our city'. I think we’ve woken up as a group to the reality that this is a Jewish city, this is a Christian city, this is a Muslim city. And that calls for us to be deeply respectful, but it also calls us to witness as Christians in and around this city to our conviction about all that Jesus says in the Gospels about loving your neighbour as yourself, to be respectful to those of other faiths, but also to have a special care for the poor. Christians, both in Jerusalem and around Jerusalem, are exemplary in that regard.