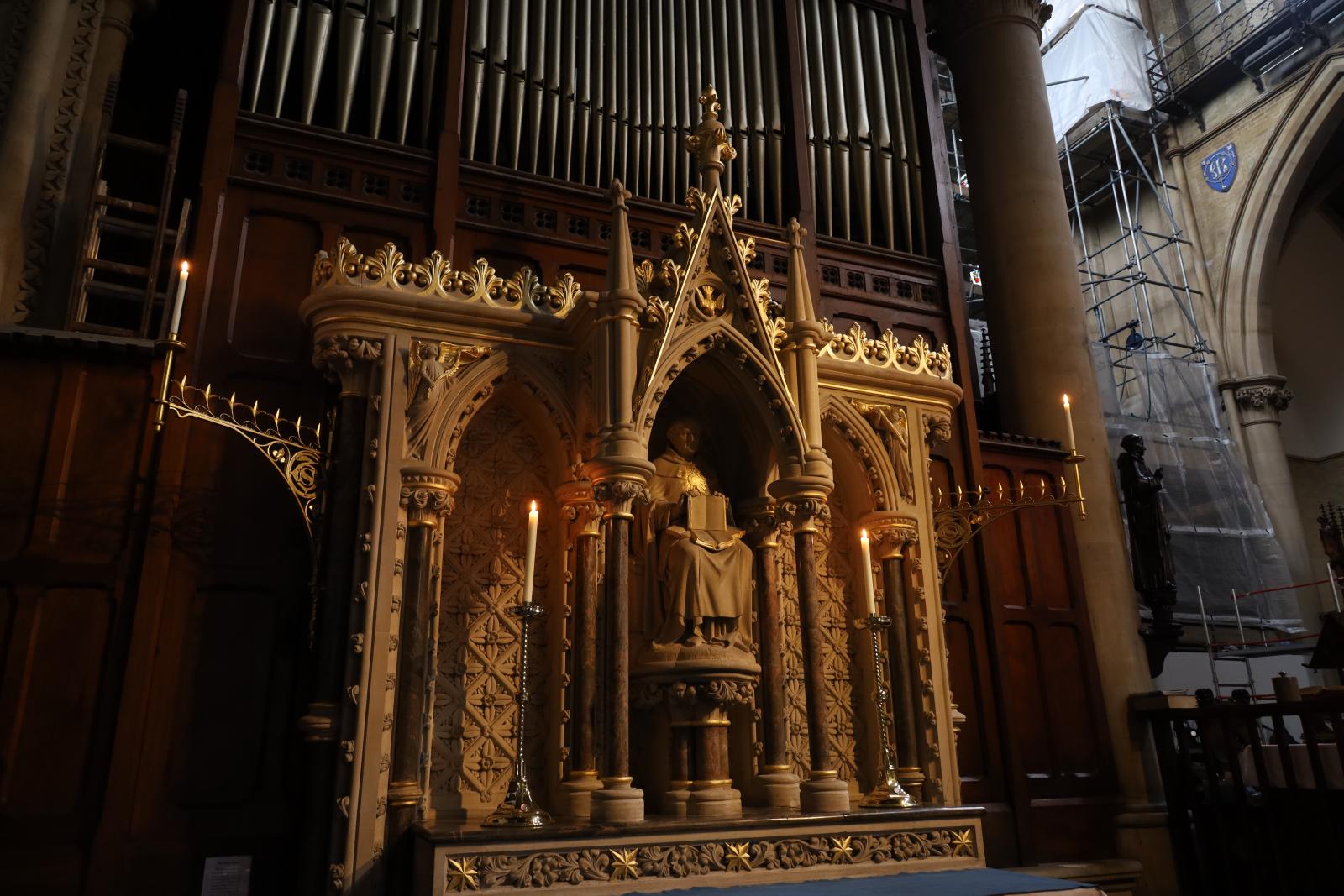 Reproduced with kind permission, from the Rosary Shrine website.

The altar of Saint Thomas Aquinas, at the top of the south aisle, sits right up against the great organ. It was donated by Mrs Monselle in memory of her four sons, all of whom became priests. As the brass plaque to the left of the altar indicates, three of her sons (two of whom were Dominicans) died tragically young. 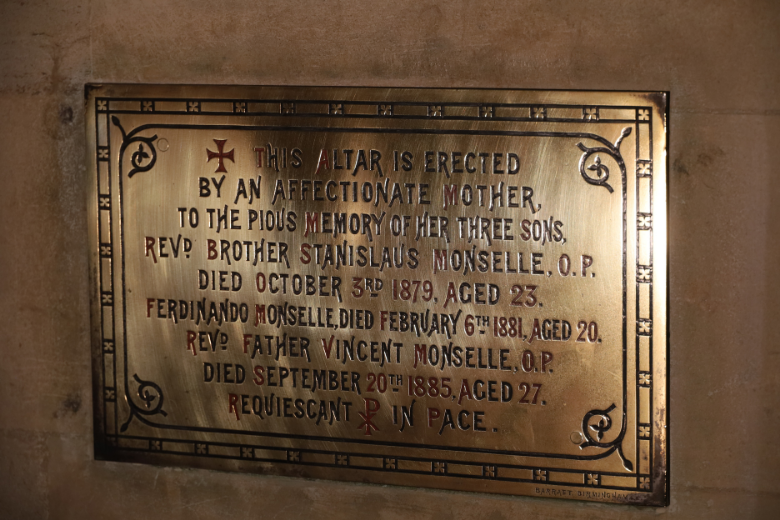 Heartbroken, Mrs Monselle erected this beautiful altar, a veritable Shrine, dedicated to St Thomas Aquinas, to whom her sons must have had a great devotion. St Thomas Aquinas was a Dominican friar and priest, the pre-eminent theologian and philosopher of the Catholic Church, and declared the Common Doctor of the Church, who died on 7th March 1274. His feast day is still celebrated on this date in the Dominican rite calendar, although the universal Church now observes his feast day on 28th January, the anniversary of the translation of his relics to Toulouse where they are enshrined in the medieval Dominican church (L’eglise des Jacobins).

This year the English Dominican Province gives thanks to God for their 800th Jubilee, for the first Dominican friars arrived in England in 1221, sent by St Dominic himself, and they established their first priory in Oxford on the 15th of August 1221.

In commemoration of this historic event, and to celebrate the 800th anniversary of the Province, the friars at St Dominic’s, London decided to restore and, for the first time, gild the altar of St Thomas Aquinas. The plan to gild the altar, as it was a new addition to the interior of this Grade II* listed building, had to be submitted to the Historic Churches Commission for consent. The friars noted that the three altars in the Lady Chapel, which have similar stonework and gables to the St Thomas altar, are all gilded, and so it would be fitting to thus complete the gilding of this set of four altars, which are the only altars in the church not dedicated to one of the Mysteries of the Holy Rosary; the other fifteen altars in the church, including the High Altar, are effectively Rosary altars. Happily, approval was granted by the HCC, and they were asked to consider replacing the finial that surmounted the central gable but which had gone missing. The restorer was prepared to re-create this, using a historic photograph to help him replicate the original finial. 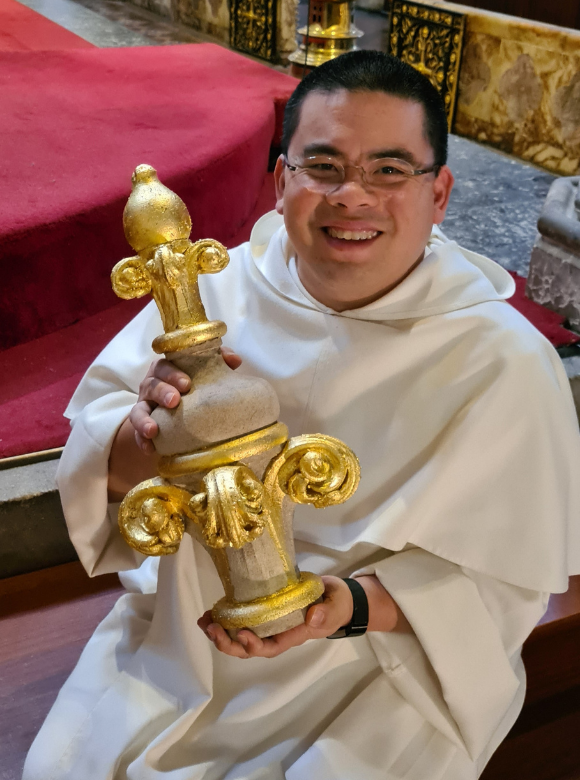 As work commenced this week and the altar was cleaned, the original finial, although broken in parts, was found on top of the altar. This saved time and money so the finial was repaired and then gilded and put back in its place, where it beautifully crowns the entire work.

The Aquinas Altar was completed and beautifully gilded just on time for his dies natalis, his heavenly birthday, on 7th March. The gold highlights include the carving of the Holy Spirit in the form of a dove, the edges of the pages of his books, the sun emblem on St Thomas’ chest, and the stars on the predella and around him. The sun and stars are inspired by this verse of Scripture: “They that are learned shall shine as the brightness of the heavens: and they that instruct many to justice, as stars for all eternity.” (Daniel 12:3) 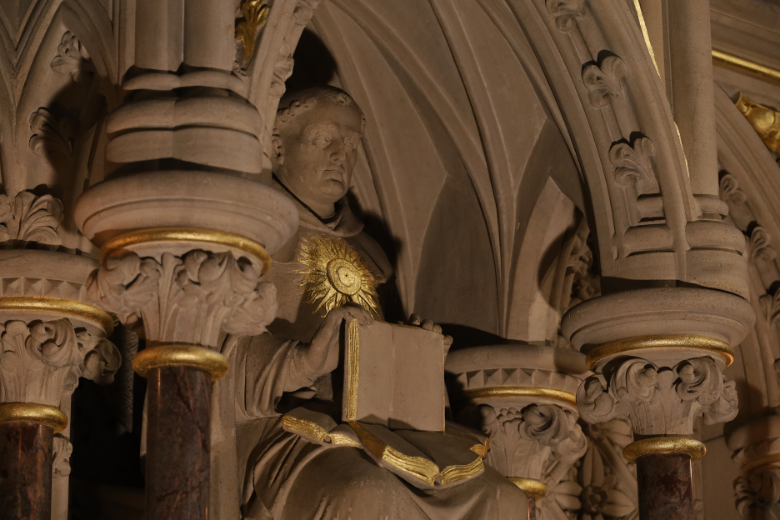 Funding for this project came from generous donations, including a donation from members of the Priestly Fraternity of St Dominic, fitting, given the intention of the original donor of this altar. A Mass will be celebrated for all those who donated towards this restoration.

We trust that Mrs Monselle will be pleased with this work, and we ask St Thomas Aquinas to pray for her and her sons, and for the English Dominican Province. May the Lord grant us many vocations, fervent lovers of divine Wisdom and preachers of Truth like St Thomas Aquinas, the Angelic Doctor. 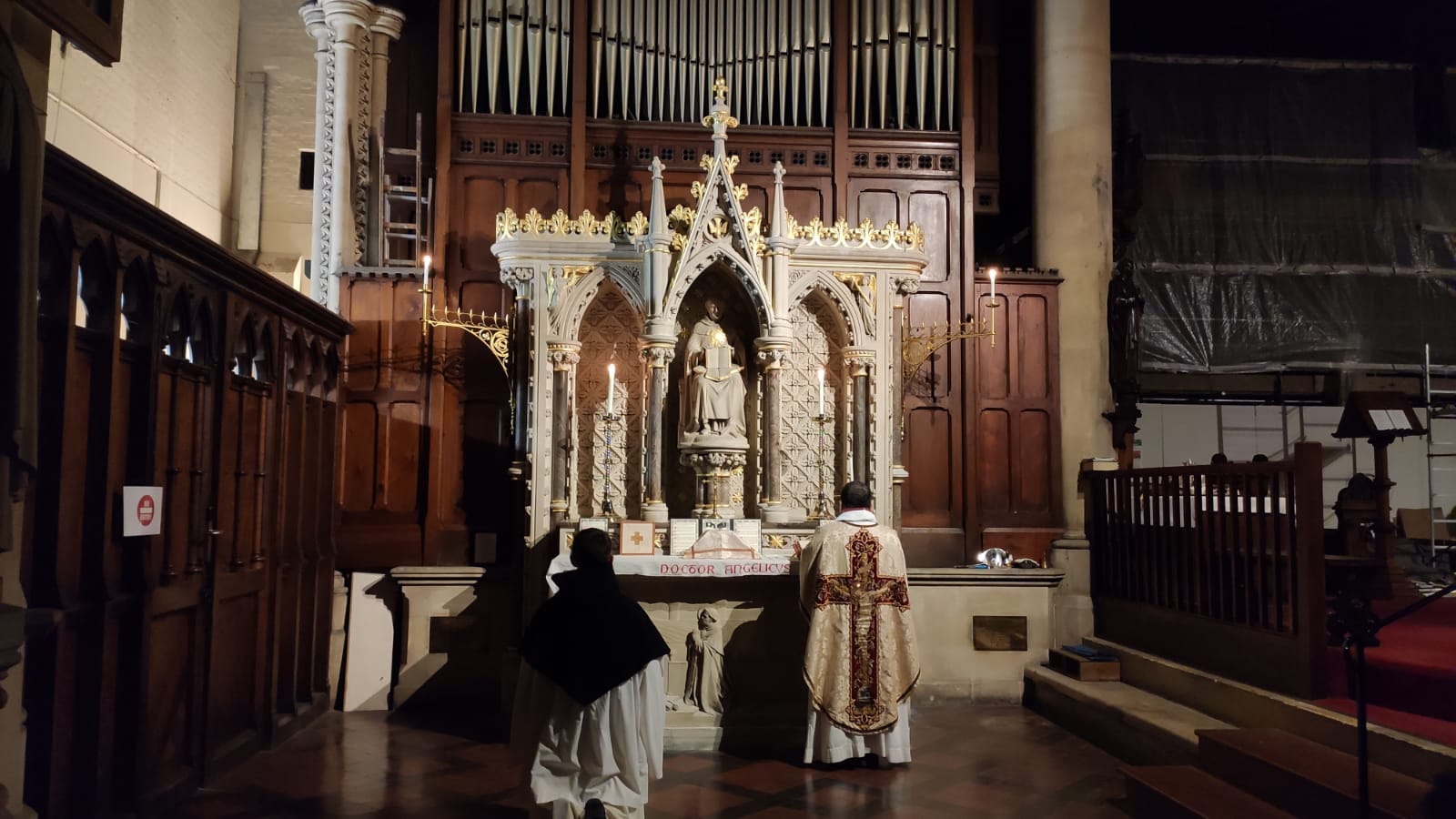