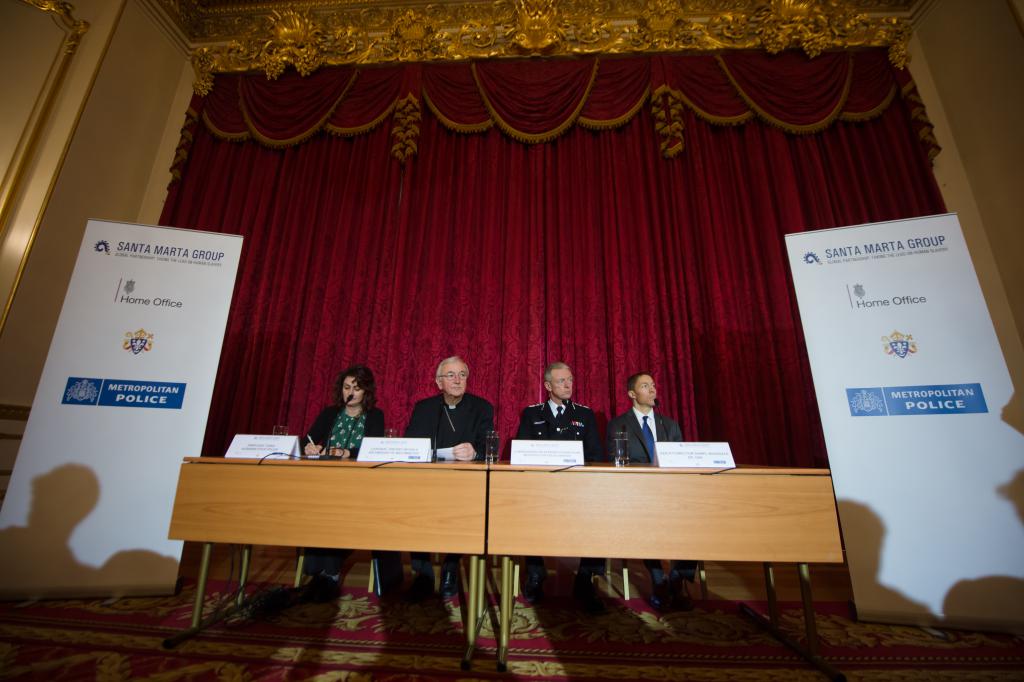 Cardinal Vincent along with police chiefs and Church representatives from across the world came together on 5-6 December to join Home Office ministers for the second meeting of the Santa Marta Group aimed at developing strategies to combat human trafficking.

The Santa Marta Group, led by Metropolitan Police Commissioner Sir Bernard Hogan-Howe and Cardinal Vincent, is an alliance of international police chiefs and bishops from around the world working together with civil society to eradicate human trafficking and provide pastoral care to victims. The conference showcased and built upon the joint police and Church initiative in London that has been running for the past three years; a collaboration that is to be copied and adapted around the world and strengthened by the ties formed within the Group.

The conference, which was held at Lancaster House, was organised by the Bishops’ Conference of England and Wales, the Metropolitan Police Service (MPS) and the Home Office. Speaking on behalf of the Government were Home Secretary Theresa May and Minister for Modern Slavery and Organised Crime Karen Bradley.

At the launch of the Santa Marta Group, named after the Papal residence where the participants stayed in April 2014, Pope Francis described human trafficking as ‘an open wound on the body of contemporary society; a crime against humanity’.

Police chiefs, senior law enforcement officers and representatives from nearly 30 countries from all continents were in attendance.

Before the conference, the Holy Father, Pope Francis, extended his greetings to the delegates and expressed his deep gratitude for their ‘resolve in combating this evil for your commitment to carry on the work begun at the conference held in the Vatican in April of this year’.

Opening the Conference, Cardinal Vincent thanked the many delegates for their presence and ongoing hard work. He praised the ‘huge potential’ for the partnership formed between the Church, police and religious sisters and said each partner has a vocation within the Group to ‘make a difference and be unstoppable.’

Karen Bradley MP explained how there are an estimated 10,000 to 13,000 people living in slavery in the UK alone. She expressed her pride that the UK was leading the global fight against slavery and that the Government’s Anti-Slavery Bill which will be passed in Spring 2015 is the first of its kind in Europe.

Bishop Pat Lynch introduced a video about Bakhita House, a residence, run by Caritas Westminster, which provides a safe haven for trafficked persons. He also related the story of St Josephine Bakhita, the patron saint of trafficked people, who is the inspiration for the house.

St Mary’s University, Twickenham, is the latest addition to the Group and Francis Campbell said he hopes that the university will use its resources to tackle the problem by informing policy, hosting conferences and intelligently placing resources in conjunction with the Church and Home Office. He also expressed his desire that trafficked persons will be able to attend St Mary’s so that it can be at the forefront of the restoration of the person.

At the concluding press conference, Cardinal Vincent described victims of trafficking as being ‘sold a dream’ to come and live in the UK but said that the momentum is gathering against trafficking.

The next meeting of the Group will be held in Madrid in 2015.