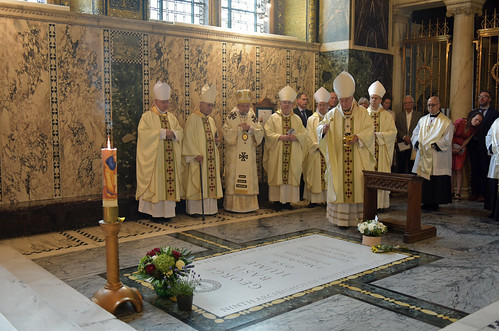 On Monday 17th June, on the 20th anniversary of the death of Cardinal Basil Hume, Cardinal Vincent, along with a number of bishops and priests, celebrated a Memorial Mass for the late Cardinal.

Sharing many memories of the Cardinal Hume, Cardinal Vincent said in his homily: ‘What I cherish most about Cardinal Hume is his stature as a man and teacher of prayer. He knew, I know, you know, that only prayer can answer the aching emptiness so often deep in our hearts.’

He thanked the Cardinal Hume Centre for their help in the preparations of Mass and for producing the booklet, which, he said, ‘contains many lovely memories and reflections’.

At the end of Mass, bishops, priests and the faithful, processed to the Chapel of St Gregory and St Augustine where Cardinal Hume is buried, for prayers and blessing of the memorial stone.