Over a century of care 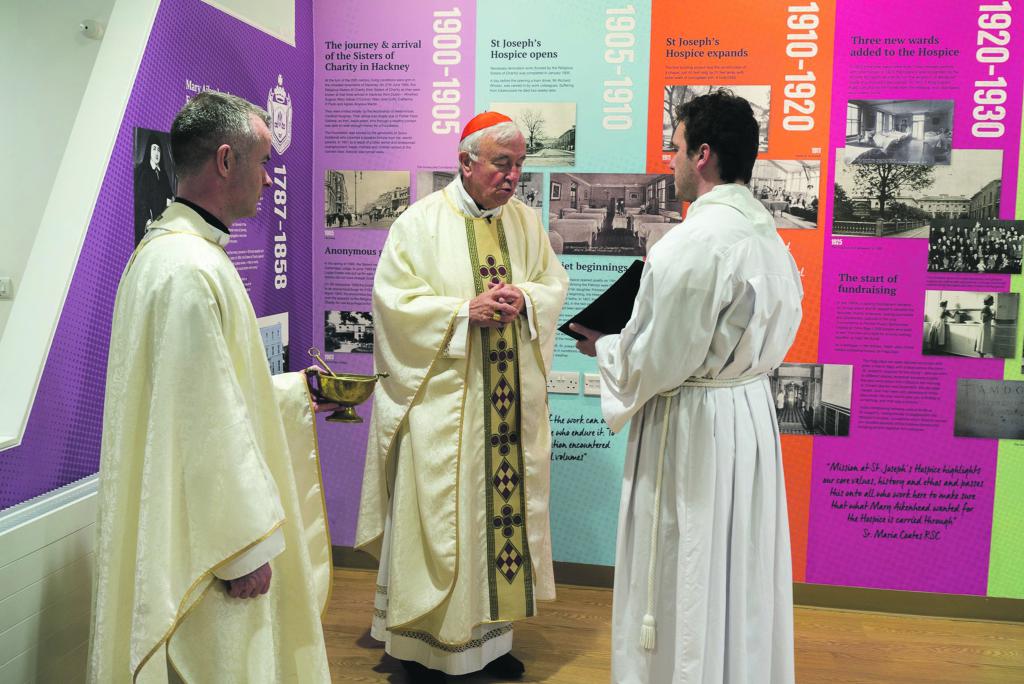 On Wednesday 17th January, Cardinal Vincent Nichols visited St Joseph’s Hospice, Hackney to bless the newly-built Heritage Space, which commemorates those who have served, were cared for or have been a part of the hospice since its founding 113 years ago.

The Heritage Space is a mural, comprising twelve colourful sections. Eleven sections each record a decade in the life of the hospice. Achievements, such as new buildings or visits from VIPs (among them, Her Majesty The Queen and Princess Diana) are included.

The twelfth panel records the future aims of the hospice, which include plans to use existing empty office and staff accommodation space to house projects supporting those marginalised in society in the spirit of Venerable Mary Aikenhead, foundress of the Religious Sisters of Charity who established the hospice in 1905.

Cardinal Vincent was welcomed by Nigel Harding, CEO of the hospice and Fr Peter Scott, hospice chaplain. After celebrating Mass in the hospice chapel, the Cardinal Vincent blessed the Heritage Space. He met with Carolyne Barber & Sr Maria Coates RSc, the designers of this new project who have taken up the role of teaching the Catholic mission, rich history, ethos and core values of the hospice, pictorially displayed in each mural.

During his visit, Cardinal Vincent met some of the sisters, trustees, senior management team, mission staff, and chaplains. Accompanied by Director of Care Ruth Bradley, Senior Nurse Debbie Pegram and Fr Peter, he also visited three of the wards, where he met and spoke with some of the patients.

From the very beginning, the hospice welcomed patients of all faiths and none. In the first two years, 212 patients had been welcomed and, in 1907, the hospice had 12 beds.

Today, St Joseph’s has 49 beds and serves the three boroughs of Hackney, Newham and Tower Hamlets. The hospice supports 700 patients a year with wonderful care as they are dying.