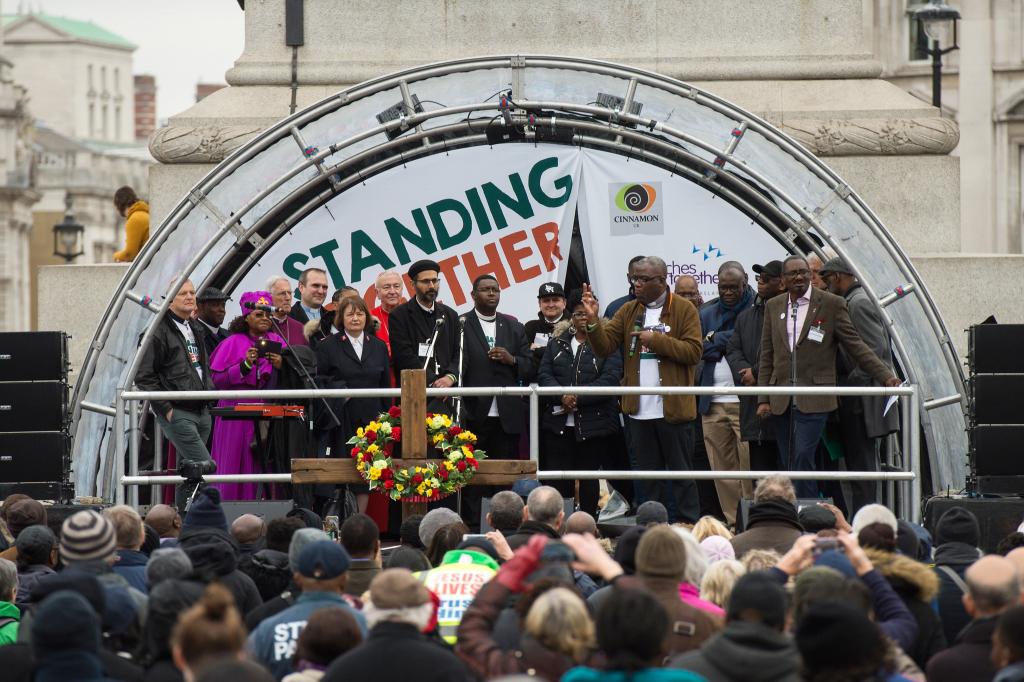 Cardinal Vincent  joined other church leaders at the Standing Together rally in Trafalgar on Saturday 6th April to call for an end to knife crime, to demand action and to stand alongside young people, families and communities affected by the scourge of violent crime.

Reflecting afterwards, Cardinal Vincent spoke about the need to warn young people about gangs and to provide them with alternatives:

'I know some of our Catholic schools in London are leading the way in the work with the Metropolitan Police to try to explain to young people early in their lives about the dangers, about the risks, and about how to react.

'The only way of counteracting a gang culture is to create for young people a sense of belonging to something else: something that's positive, creative and attractive to them.

'I had a request from a priest this week who's looking to start a boxing club in his parish. In my youth in Liverpool there were a lot of Catholic parishes with boxing clubs because they taught discipline and the right use of strength. They even produced a few world champions (John Conteh was one) but this was the alternative to gang culture and this is the kind of reaction we need to involve young people in a way that calls out their commitment and helps them to build discipline and self-control in their lives, and that's the best counter to some of the worst influences today.'

The Cardinal also made reference to negative social media influences:

'In families and schools we need to be scrupulous in telling each other the truth and not hiding behind the half-truths, crudeness and unworthiness of things that are cheap, quick and popular today. Young people need deep roots so they can stand tall and grow to their full potential.'

He also had a direct message to young people who have found themselves involved in gangs or carrying knives:

'If you or your friends are involved in gangs, try to find a way out. If you or your friends carry or possess knives, go to one of the banks and anonymously get rid of the knife in your possession, just get rid of it. It doesn't make you safer it puts you at risk of using it and not only will you cause harm to somebody else, you'll damage your own life.

'So build friendships, find places where you can go and sit and honestly talk and share your experiences with other people. Say your prayers, turn to God, turn to Christ and let your life grow from that relationship with Jesus rather than from anywhere else.'

Continuing to emphasise the need for prayer and to look to the Cross not just as a place of sorrow and suffering but a place that witnesses the birth of new hope, he said:

'For families worried about their youngsters, talk, talk, keep talking. To families who are worried and strained in their relationships, find times of silence when you sit together, say a simple prayer.'

In the Diocese of Westminsters, secure knife bins where knives can be disposed of anonymously are availble at the Parishes of St Ignatius in Stamford Hill and St Melliltus in Tollington Park.