Celebrating the Bicentenary of the Sisters of Charity 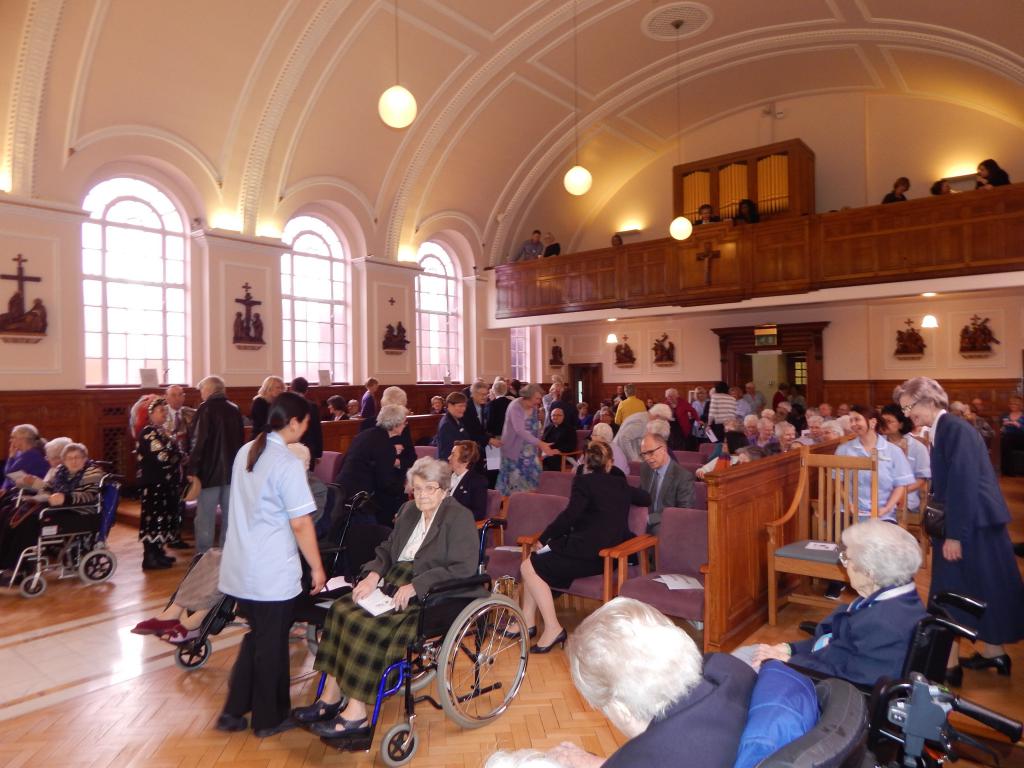 The Religious Congregation of the Sisters of Charity who founded St Joseph's Hospice in Hackney marked the bicentenary of the foundation of their order by the Venerable Mary Aikenhead with a Mass celebrated by Cardinal Vincent at the hospice on 10 March 2016.

Sr Rita Dawson RSC, Provincial of the English and Scottish Province, welcomed Cardinal Vincent, saying it was 'right and appropriate the Cardinal is here to celebrate Mass today as it was a previous Archbishop of Westminster who initially invited the Sisters to London back in 1900'.

Recounting the history of the foundation of St Joseph's Hospice, Sr Rita described the challenging environment and the hardships the Sisters faced over a century ago when they founded the hospice. She also spoke of the many advances the hospice quietly pioneered in palliative medicine and care.

Sr Rita explained that it was the ethos and core values of the order that motivate their work: 'The ethos and core values of this hospice are the same today as they were back in 1900 and are shared throughout the world, connecting us all internationally.  These values can be seen as old fashioned and out of touch but the charism of our faith is what is required in such a troubled world.

'We live in times where it is all too common to attempt to airbrush out achievement, history, and the religious underpinning of the ethos and core values of organisations which contribute so much to the wellbeing of our society at large.'

Cardinal Vincent, in his homily, echoed Sr Rita's conviction that the Catholic faith which motivates the good work of the hospice: 'Having a Catholic heart, St Joseph’s readily welcomes people of all religions or none. The presence in this chapel of the Risen Jesus, radiating God’s merciful love, surely touches all of you too and so comes to be bestowed upon us through you.'

The Cardinal also paid tribute to the work of Mary Aikenhead the Sisters, saying, 'You know, what really strikes me about Mary Aikenhead and the Congregation she founded is just how marvellously you show what the Year of Mercy is about. You follow faithfully Mary’s dedication to corporal and spiritual works of mercy, not least by your abiding commitment to hospice care, care needed just as much today, if not more. To care for the sick and the dying, to console those who are suffering and to comfort those who are spiritually distressed are all at the heart of the works of mercy.'

He went on to say, 'The Religious Sisters of Charity remain true to [Mary Aikenhead's] witness. As did she, you faithfully proclaim Gospel joy. Thank you. Thank you especially for this hospice. May it continue to realise that burning desire of Mothers Charles, Philip and Mary: for those judged ‘beyond hope’, may it ever be a haven of sure and certain hope.'

The full text of Cardinal Vincent's homily can be read here.

The full text of the address given by Sr Rita Dawson RSC follows:

It is my privilege, as Provincial of the English and Scottish Province of the Religious Sisters of Charity, to welcome you all today to our Mass of Celebration marking the bicentenary of the founding of our Order, by the Venerable Mary Aikenhead in 1815.

I wish to thank His Eminence Cardinal Vincent Nichols for being here with us today, a visit I hope will be one of many.  It is right and appropriate the Cardinal is here to celebrate Mass today as it was a previous Archbishop of Westminster who initially invited the Sisters to London back in 1900.

Five Religious Sisters of Charity arrived in Hackney on 2 July 1900 and by 1901 a convent had been opened. The winter of 1901 was particularly bitter and there was terrible unemployment.  Mothers and their children arrived at the convent doors, cold and hungry.

Nobody was turned away.

By the spring of 1903, the Sisters moved into 6 Cambridge Lodge.  The house was quickly put up for sale but the Sisters did not have enough funds to buy it.  In December 1903, an anonymous buyer purchased the property for £10,000 (equivalent to £1 million pounds in today’s money) and handed over the property to the Religious Sisters of Charity for use as a hospice.

After much hard work, and exhausting the money which the Sisters did have, St Joseph’s Hospice was opened, quietly, and with no fuss in January 1905.  Indeed, the hospice actually received its first patient the day before it opened. The next thirty-five years witnessed a steady, but relentless expansion of the facilities and services at St Joseph’s.

However, in 1939 with the commencement of war in Europe, the patients and equipment were moved to accommodation in Bath which was also owned by the Sisters.  The Sisters returned in 1945 and embarked upon a further programme of repairs and improvements.

In 1958 Cicely Saunders joined the staff at St Joseph’s where she began her clinical research. The Sisters provided the resources and platform upon which she built her framework for modern palliative medicine.

Macmillan Cancer Support was launched from St Joseph’s in 1975 and the co-founder of Help the Hospices was St Joseph’s first Medical Director in 1979.

I could go on at length about the landmark moments in the history of St Joseph’s.

One truth which cannot be denied is that the list of ground breaking achievements of this hospice of ours is truly inspiring and is the tangible legacy of those five fearless and pioneering Sisters.

The hospice was founded by the Sisters and remains part of the International Healthcare Facilities of the Religious Sisters of Charity.   The ethos and core values of this hospice are the same today as they were back in 1900 and are shared throughout the world, connecting us all internationally.  These values can be seen as old fashioned and out of touch but the charism of our faith is what is required in such a troubled world.  We live in times where it is all too common to attempt to airbrush out achievement, history, and the religious underpinning of the ethos and core values of organisations which contribute so much to the wellbeing of our society at large.

It is therefore part of my vocation, and it should be our universal responsibility, to protect, preserve and cherish that ethos and those core values which were laid down two hundred years ago by a woman of revolutionary vision, Mary Aikenhead.

This is a Catholic hospice but right from the very beginning, the hospice welcomed patients of all faiths and none.  Beside the care of the very ill and terminally ill people, St Joseph’s also provided care for older people.  The Sisters organised jumble sales, bazaars and summer fetes which were a wonderful opportunity for local people to come and buy excellent clothes, furniture, toys etc.

People always seem to believe fundraising is a new and innovative concept, but the Sisters have been fundraising since 1900.

Over the past 100 years the hospice has grown and developed and now provides a full range of community and inpatient services to the people of Hackney and surrounding areas. With a new CEO coming on board, this will be an opportunity to re-establish and reinvigorate the mission laid down by those sisters in 1905.

It is important to recognise the contribution made by our present Chair, Chris Bourne, who has given so much time over such a difficult period.  He can be assured his successor will drive this hospice forward, always having at the heart of it, our mission and core values. We thank all staff past and present and all volunteers and our supporters for their continued commitment and service.

This Mass celebrates the 200 years of the formation of the Religious Sisters of Charity by their Foundress Mary Aikenhead.  It was a fitting tribute to Mary Aikenhead during the bicentenary year, she was declared Venerable by Pope Francis.

Perhaps a final thought on the Venerable Mary Aikenhead. Our world seems entirely dominated by celebrity culture where people come and go so fast.  Mary Aikenhead and her Sisters of Charity have stood the test of time.  The Sisters were, and are, women of astounding commitment, steadfast courage and supreme dedication.

They changed the world, challenging inequality and oppression, changing the lives of ordinary men, women and children, whilst always preserving justice and the dignity of the individual.

We have a determined will to continue Mary Aikenhead’s work.

Sr Geraldine will now present you with a gift from the Community here.  I hope that this visit will be the first of many.  Again to say thank you to all of you for being here today, to Meg Hillier MP, Madam Speaker and the Pearly King and Queen.

The last thing I wish to say here today is to always remember why we are here.  We are here for the patients and their families and we must never forget this.