Cardinal Vincent Reflects ahead of Synod on the Family 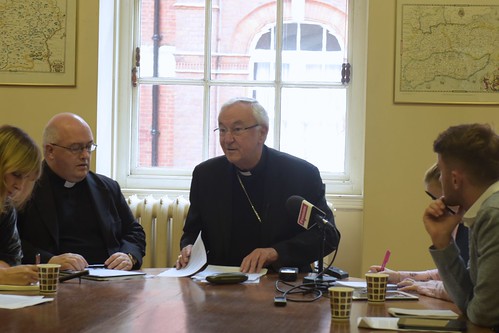 On 22 September, Cardinal Vincent gave a press conference to set the context for the forthcoming Synod on the Family and to reflect on the some of the responses he received to the consultation with the faithful.

You can listen to the entire press conference here.

It was his feeling that the synod has received so much attention because ‘the family is the key to the relationship between the work of grace and our daily experience of faith. If you want to see faith in action, the first place to look is the family.’

He went on to say that the family is where we first learn about ‘relationships, humanity, struggle, fidelity, and working out the great venture of being fully human which is fundamentally at the heart of the Catholic project’.

The Cardinal explained that this synod is one stage in a three-phase process that began with last year’s Extraordinary Synod and is expected to conclude next year when Pope Francis publishes a document based on the propositions that were agreed at the synod. It is significant, the Cardinal noted, that the document would be published during the Year of Mercy and it is in this context that the work of the synod should be viewed.

Prior to explaining the consultation process that took place and summarising the major themes, Cardinal Vincent wished to revisit the ‘remarkable speech’ which the Pope gave at the conclusion of the last synod.  In the speech, Pope Francis emphasised the importance of listening attentively and remaining open to the work of the Holy Spirit. With a wide range of contributions and voices, it is the role of the Holy Father to guarantee unity and fidelity to the mandate of Christ.

The Pope had also warned against falling into various temptations which inhibit the work of the Holy Spirit.  He listed the first as hostile inflexibility, closing oneself within the written word and law, rather than what we need to learn and achieve. His second warning was against a ‘destructive tendency to goodness’ in the name of a ‘deceptive mercy’. The danger of this is that we bind the wounds before curing and treatment their causes.

Pope Francis also warned against transforming stones into bread to break the heavy fast, and equally against transforming bread into stone and casting it against sinners, the weak and the sick. The fourth temptation, he said, was to come down from the Cross in order to bow to a worldly spirit instead of purifying the will and bending it to the spirit of God. He warned that we must not neglect the deposit of faith.

The Pope asked that the interval between the two synods be spent in true spiritual discernment. Listening to the Holy Spirit is key to this process as he is the harmony of the Church. ‘The Holy Spirit alone is the harmony of our unity and plurality. When we attempt to create diversity, we create schism. When we want to make unity, we create uniformity.’

Cardinal Vincent noted that at the day spent reflecting on the responses with the clergy, ‘we spent as much time in silent prayer as in vigorous discussion to get the balance right’.

The Cardinal remarked that the key themes of concern that were emerging in the West have focused predominantly on the pastoral care of those in complex circumstances such as divorce and remarriage, civil marriage, sexual orientation, social isolation and admission to the sacraments, and especially the Eucharist.

The Cardinal went on to discuss the reflections and responses he has received in this time. He explained that there were four sources of responses: from a formal consultation with those responsible for marriage and family life apostolates in dioceses, from responses from all 16 dioceses in England and Wales to a questionnaire circulated by the Bishops’ Conference, from discussion papers contributed by deaneries, and from many individuals who wrote to him personally from this country and from around the world.  He noted that it has never been easier for any individual or group of individuals to make their views known to their bishop than in this process.

These responses demonstrate a wide variety of views. Many people expressed receiving great satisfaction and fulfilment from their married lives and believe that their daily life expresses their faith.

For others, they expressed strong feelings of anger and frustration towards the Church. The Cardinal said that some of the letters he received left him feeling ‘dismayed and helpless’ at the situations of family breakdown and hardships that people experienced. He explained that there are some situations that the Church cannot solve, ‘they are the dilemmas of life and we have to live them and carry them’.

He explained that it’s important ‘to learn more about how we make everyone welcome’ in the places we share. However, he emphasised, with respect to the Eucharist, that ‘no one should receive Holy Communion or understand it as a badge of acceptance. It is always an invitation, a challenge to change. To receive Holy Communion is to be willing to change.’

He added, ‘One of our great issues is to see the pattern of conversion in the lives of people who have experienced failure in their marriage.’

‘Married and divorced people are not a category,’ he said. ‘They are people on a pilgrimage like the rest of us.’

The Cardinal emphasised that the synod is not a PR exercise and there would be no easy answers to people’s complex lived reality. He said: ‘This is a Church of sinners. We make a mess of things. We have a lively, passionate family and we have our arguments and different points of view. And that’s fine because we have a shared Lord.’

Cardinal Vincent has asked for the prayers of everyone in the diocese during the synod. The synod takes place from 4 to 25 October.

You can also listen to the Cardinal's reflection with clergy of the diocese here.