Cardinal Vincent Comments on the Challenges to Catholic Education 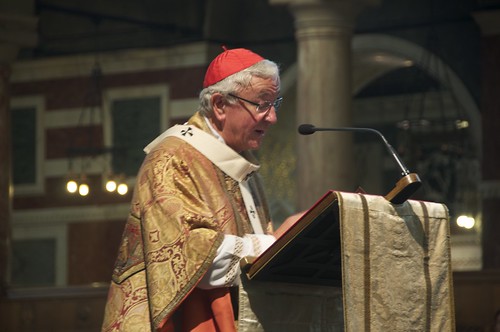 In his homily at the Mass celebrating the centenary of the Cardinal Vaughan Memorial School, Cardinal Vincent comments on the challenges to Catholic education today.

The Cardinal compares the challenges in the previous century and Cardinal Bourne's response to those faced by Catholic schools today:

'Cardinal Bourne’s time was a time of profound and widespread opposition to Catholic Education, not from a secularist standpoint but from the dominant Protestant Liberalism of the day. Cardinal Bourne had a long battle, conducted very skilfully, to defend and establish the position of Catholic Education as a true and proper expression of parental choice and therefore having a true and proper place in a democratic society. Bourne won the day, and so your school exists, as a memorial to his illustrious predecessor.

'Our battles for Catholic Education today are less intense but real. We live in a very plural society in which cohesion and mutual understanding is so important. Catholic schools recognise this. Thus we put forward systematically the principles on which a good society can be based, drawing on the wealth of Catholic Social Teaching, a treasure that others are beginning to recognise. In the same vein, we have long recognised the importance of studying the beliefs and practices of other religions, doing so from the constructive basis of a living faith in God. If there is a problem with religious literacy today, with ignorance of other religions, as many are suggesting not least in light of the problems faced in Birmingham, the problem does not lie in faith schools, in Catholic schools. It lies elsewhere, wherever religious belief is treated in a minimal manner, or even disparaged. That is where the problem is to be tackled.'

An extended extract from the homily can be read here.