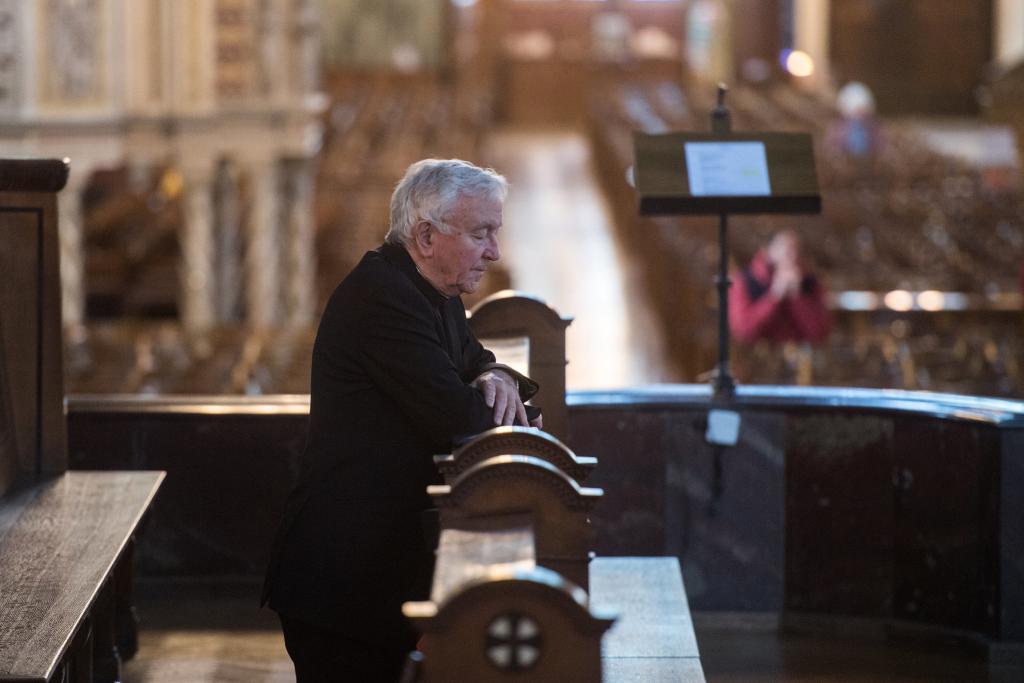 On Thursday 14th May, Cardinal Vincent spoke to Justin Webb on BBC Radio 4's Today programme about how plans that the Catholic Church has put forward for re-opening churches safely for private prayer as the government eases lockdown restrictions during the Covid-19 pandemic. Here is their conversation:

Justin Webb (presenter’s cue)
Is it right that you can go to a garden centre or to the council tip, but not to church? Faith leaders are meeting ministers on Friday to try and change this. Cardinal Vincent Nichols, the Archbishop of Westminster and President of the Catholic Bishops’ Conference of England and Wales.

Cardinal: What we want to say (to ministers) is that the issue of how people are able to practice their faith are profound and are sensitive and we would like a bit more sensitivity from the government. And we would like to remind them that the Catholic Church certainly has put forward already detailed protocols, agreed with Public Health England about how we can start the process, step by step, of making churches available for people.

We want to do this for a couple of reasons, one is because they offer a private, quiet space for individual prayer and that helps people’s inner stability, and also because the faiths are a terrific motivator for aspects of the service that are given in society today. Within a mile of here there are two Catholic institutions that feed 300 people every day and that is motivated, in a good part, by their faith.

Now, in these last weeks, we’ve been creative, we’ve been faithful. Mass has been celebrated every single day in Catholic churches. People have joined in online but there’s something, a big, big feeling in the religious communities, of wanting to get back to a fuller practice of their faith, as long as we can do it safely.

Cardinal: Well, to begin with, I would like churches available for people to go and kneel and say their prayers, privately, individually. It would mean a routine of supervision; a routine of social distancing; a routine of cleansing. And all of that we believe we can do.

There’s another thing it needs. It needs an understanding of what goes on in places of worship is quite different from one to another. So a personal, individual prayer in a Catholic church is not something that is much done in Pentecostal churches, which tend to concentrate on big gatherings, and it’s not what’s done in mosques where people pray side by side. So we need a bit of differentiated thinking.

If I could use the analogy of sport… At the moment, it’s okay to play tennis with your family, in a bit it will be okay to have a kick around with your mates in the park. It’ll be quite a time before we can go to formal football matches. It’s all sport, but we need to differentiate. We are talking about the practice of faith, but we also need to differentiate to make things safe – step by step.

JW: You can see, can’t you, why the government is so ill-equipped to do that in a sense. They don’t want to get involved in one faith being allowed to do something that another isn’t. But you are saying, if you are going to be literate about religion, you have to grasp the nettle, if i can mix up all sorts of metaphors.

Cardinal: Yes and probably be stung a bit as well.

Cardinal: This is why the taskforce that meets will bring together these perceptions and the religious literacy that is needed to take this forward. But I think it can be done. We have to do it in a very co-operative way, reflecting Lord Blunkett’s comments. But we’ve got plans; we’ve got preparation and we know the depth of peoples’ feeling and their need, so that they can live their faith well and safely. That’s what we are looking for.

JW: It was that last point I was going to finish with if we may. What have you heard from people about the need that they feel in themselves physically to be in Catholic churches?

Cardinal: The Catholic faith has a particular structure and pattern which is built around sacraments and sacraments are explicit moments in which we are contact with the Lord. People have been distanced from their sacraments. They have been able to follow Mass every day and hundreds of thousands of people have joined in online. But every single one of them wants to be able to receive Holy Communion.

It’s a fast for us; it’s quite a painful fast, and that’s true for other faiths. I was talking to four Imams yesterday and they would say the same. Think of the patterns of Ramadan and the sacrifice of the Muslim community is making by never meeting outside their families during Ramadan, and at the end of the big feast.

So there is a great deal of deep spiritual sacrifice being made and, okay, we’re willing, but we want to know that we are appreciated and the sensitivities are recognised and that we have these opportunities to open up: safely, step by step.

JW: Cardinal Vincent Nichols thank you very much for speaking to us.