Cardinal calls for prayers ahead of Pope's visit to Iraq 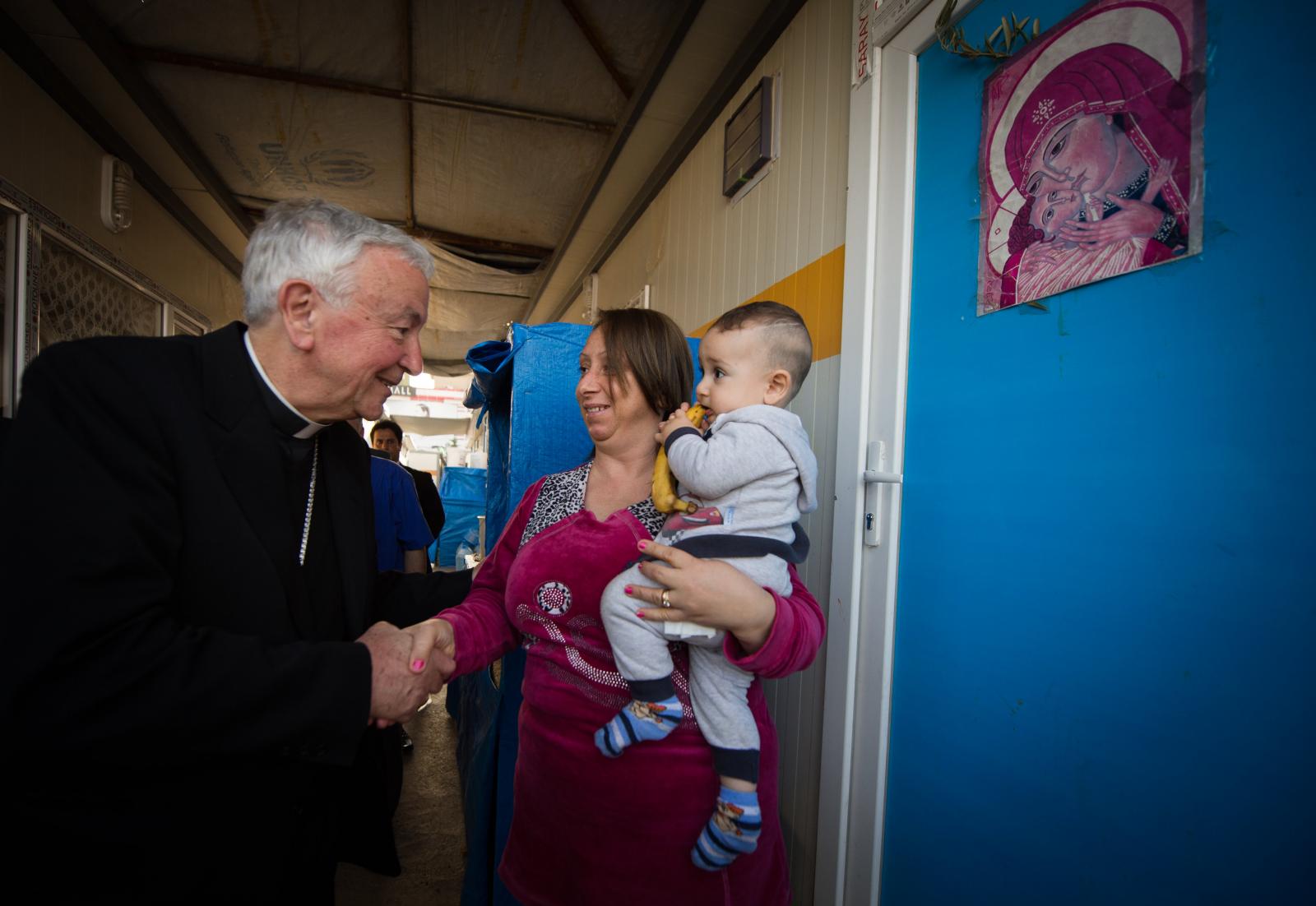 Ahead of Pope Francis' historic visit to Iraq, the first of any Pope to the country, from 5th to 8th March, Cardinal Vincent has called for prayers for the Holy Father and for the people of Iraq, that these may be days of great joy and spiritually fruitful.

The Holy Father has a busy schedule and will travel the length of Iraq to stand in solidarity with the country’s Christians and, under the theme of the visit ‘You are all brothers’, all Iraqis.

Cardinal Vincent visited Erbil in the north in April 2015, less than a year after ISIS insurgents swept through the region taking Iraq’s second city Mosul, wreaking havoc and killing and displacing thousands. In a Catholic News podcast, Cardinal Vincent recalls his strong memories from the visit, of the people he met and the Church-run projects he witnessed in action.

The country and its people are still firmly in his heart.

The Displaced
Cardinal Vincent arrived in Erbil in Iraqi Kurdistan to be greeted by Archbishop Bashar Warda, who is well-known to Catholics in the UK, having visited on a number of occasions to highlight the plight of Iraq’s Christians and the need for the international community to support them.

Cardinal Vincent recalls how the Archbishop kicked into action immediately when faced with an extraordinary number of displaced people:

'Archbishop Warda literally woke up one morning and there were over 100,000 refugees knocking on his door. And what did he do? He opened churches. He opened every bit of property that they had and said, "come and sleep here".

'He established refugee hostels and camps in all sorts of places. I remember the frame of a building that was not yet developed: just floors and pillars, like an open skeleton. And they started putting portakabins into this concrete framework so the people had somewhere to live.'

He also remembers the hospitality offered by the people in the camps. He was particularly struck by a story told by a Christian woman who felt, acutely, the separation from her Muslim neighbour when she fled the invading ISIS insurgents in June 2014:

'One woman I remember speaking to just outside her home, her portakabin, she had a number on the door and a big picture of the Virgin Mary by the side.

'She said to me, you know, "I had two hours to leave my home in Mosul. And we just had to leave, just had to walk away". But she said, "those two hours my Muslim neighbour spent weeping because we were going to be separated and we’d been there all our lives together’" And she said, "well, you know, the more I think about it, I think I’d rather be here than her, living in Mosul under ISIS".'

'I remember a tiny old lady, probably in her 80s, all dressed in black with crooked fingers. She told us about being stopped by the ISIS guards as they approached the border with Kurdistan.

'And she said they took every bit of jewellery they had. And then she said, "I began to tell him off. I began to tell this ISIS fighter that he was a disgrace and he shouldn’t be behaving like this. And that this was no way to treat anybody, never mind an elderly lady". And she said he backed off and let them through. So, you know, there was raw courage and incredible tenacity that they managed to survive this mass exodus.'

Pope Francis in Iraq
Pope Francis will celebrate Mass in the newly-reconstructed Cathedral in Qaraqosh, a city in the Nineveh Plains whose people suffered so much under ISIS. Twenty miles east of Mosul, it was the largest Christian city in Iraq. The Pope will also visit Najaf to meet with Grand Ayatollah Sayyid Ali Al-Husaymi Al-Sistani, which the Cardinal sees as highly significant:

'One of the most important things that Pope Francis has included in his agenda is the visit to Najaf, where he’s going to see Ayatollah Sistani. Now, that is crucially, crucially important, because here you have the spiritual leader of not just Shia Islam in Iraq, but in a whole swathe of the Middle East.

'He is a man who is revered and his responses are formative. He will welcome the Holy Father and what they say together and the signals that will give will be hugely important for the Christians, particularly the Catholic people in Iraq.

'You know, affirmation from Ayatollah Sistani, for the Christian Catholic community embedded in that large Muslim majority, that affirmation will be priceless. And to me, that’s one of the most important moments, I believe, in this visit.'

The Cardinal was speaking with James Abbott from the Bishops' Conference.
Photo: Mazur/CBCEW.org.uk