Cardinal: Amal embodies a whole dimension of our human family that is travelling lost, at risk and in danger 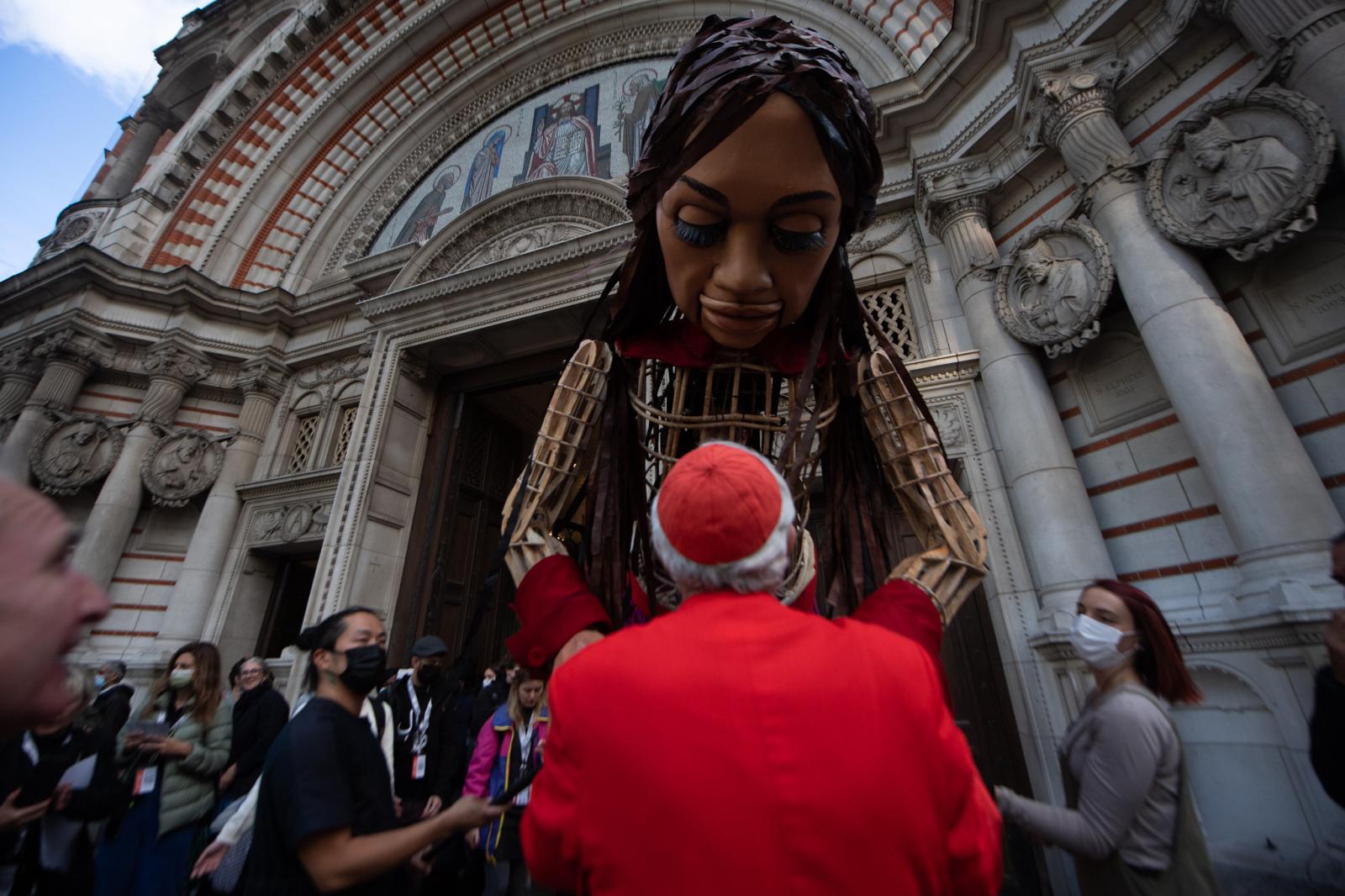 Cardinal Vincent Nichols shared his thoughts in this video recorded after a service of prayer and reflection, and welcome for Little Amal to Westminster Cathedral.

Little Amal is a 3.5 metre-tall puppet of a 10-year old unaccompanied Syrian refugee girl whose journey across Europe, from the Turkey-Syria border to Manchester, is intended to highlight the plight of unaccompanied child migrants and the dangers they face on the way.

'There’s something very creative in what we saw. Little Amal embodies a whole dimension of our human family that is travelling lost, at risk and in danger. And yet still with the kind of innocence that you would expect of a young child.

'There was a strong emotional presence and a pull that somehow, in her gestures particularly, was expressed. I think that touched everybody.'

Q: So Cardinal Vincent, Little Amal has just left the Cathedral after a really wonderful and quite unique service. Can you tell us how it felt to welcome her here today?

Well, it’s very strange, actually. Half of me says, 'come on, this is a puppet'. And half of me found myself speaking to her. So there’s something very creative in what we saw this afternoon. It wasn’t just a puppet, though it was, but it kind of embodies a whole dimension of our human family that is travelling lost, at risk and in danger. And yet still with the kind of innocence that you would expect of a young child.

So I think there was a strong emotional presence and a pull that somehow, in her gestures particularly, was expressed. I think that touched everybody.

Q: It is, of course, one part of an 8,000km journey that started on the Turkey-Syria border right back in July and has come through towns and cities, taking part in hundreds of events. Why is it so important that the Church was part of that journey?

Well, I think what was very fortunate, helpful, opportune, was the fact that she could come into the church. As I said to her at the beginning, we’re welcoming you to the home of our hearts. It is here that we gather to speak from our hearts to the God who made us and who loves us and who wants us to thrive and be at our best.

The second thing was that wonderful cross-section of people who were here, children especially, from so many different nationalities. And I could say to Amal, no matter where we come from, we find a welcome, and we want to extend that to you as well.

Then there was, a mini pilgrimage. A pilgrimage in the footsteps of St Paul, a pilgrimage to the Lady Chapel. Now, Amal is a figure that represents children who have been separated from their mother. So to come to the Lady Chapel was to discover a motherhood of a different dimension that is never broken, never closed and never lost.

I hope that speaks very eloquently to the heart.

Then, of course, back to the sanctuary and to the singing of those two lovely choirs, but also to be the place where we celebrate the death and resurrection of Jesus.

I think, also, of those two little presents at the end: a Guardian Angel and a birthday card, just perfect! It was a really beautiful moment.

Q: You mentioned the number of people in the Cathedral today from so many different backgrounds, and, of course, there have been thousands of other people taking part in the other events and more will do so over the coming days and weeks. For the people listening to this, watching the events online, what message would you want them to really take away from this journey?

Well, it’s not complicated, but it’s difficult to practise. The message is very simple. People who are desperate for almost whatever reason, but certainly as a result of violence, persecution or absolute poverty, they are our brothers and sisters. That’s the message.

And as Christians, in them we are invited to see the person of Jesus. We have to let that rumble around in our hearts, our minds and in our conscience and say, 'Can we not do better for these brothers and sisters of ours?'

Q: Finally just picking up on that point about our brothers and sisters. You personally have encountered a lot of people who, like Amal, have been forced to flee their homes, both here in England and Wales and also on your own trips to the Middle East as well as other places. Were there any particular encounters or moments that you recall today when you were visited by Amal when you were welcoming her here?

Well, I think the one that springs to mind most quickly was in Erbil. It was not long after the aggressive takeover of Mosul and the fleeing of 120,000 people from the town of Mosul. Many of them were welcomed by the Church in Erbil. And I remember standing outside this container, which had become this woman’s home, and she talked about her Muslim neighbours and how they had wept for each other at their sudden parting and how she actually said to me, 'In many ways, I’d rather be here, even in this container as my home than living in Mosul under ISIS.' And she said, 'My heart goes out to the one I’ve left behind.' So she was a woman who was hanging on but still had room in her heart for others; she wasn’t full of self pity at all. I think that’s a message for all of us about the humanity and the lived experience of people who have been forced to flee. 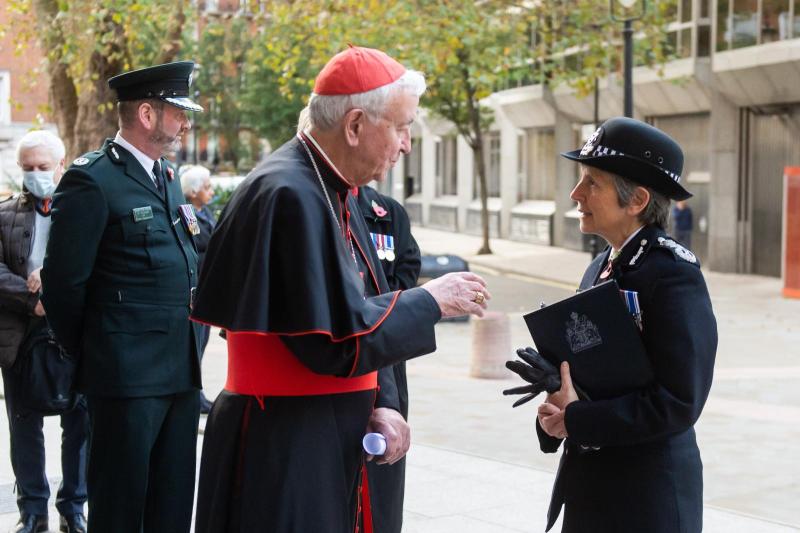 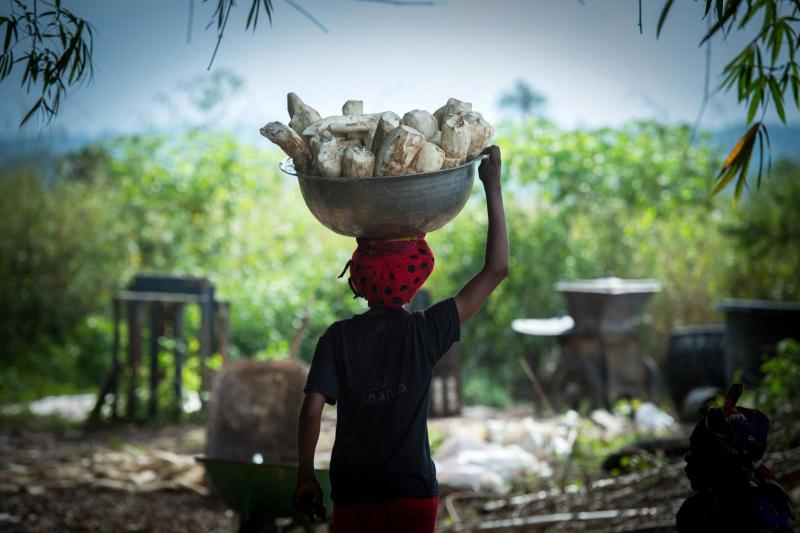 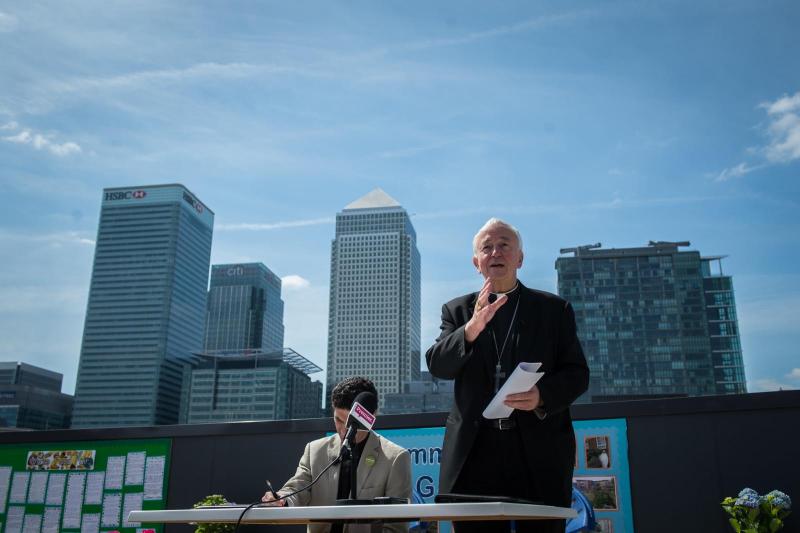