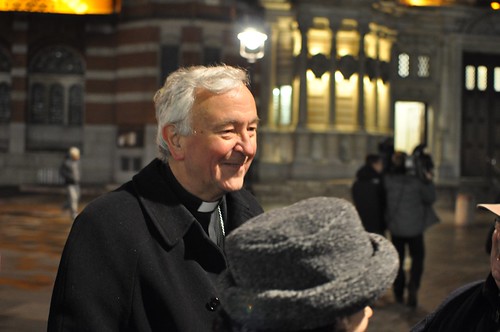 Archbishop Nichols celebrates with the faithful outside Westminster Cathedral

Cardinal Jorge Mario Bergoglio, Archbishop of Buenos Aires, has become leader of the 1.2 billion Roman Catholics globally after elected as the 266th Pope.

The Most Rev. Vincent Nichols, Archbishop of Westminster, joined with celebrations globally for the election of Pope Francis, saying:

"With great joy we welcome the good news: the Church has a new Pope! We have a father, Pope Francis. His election may have taken many of us by surprise, including me; but the more we learn about him, the more it becomes clear that the election of Pope Francis is an inspired one and that his papacy will be inspiring. Pope Benedict XVI always directed our gaze toward the person Christ, so too will Pope Francis. He will lead the Church, not by making her close in on herself, but by ensuring that she looks always to the person of Christ. Our new Pope will help us to respond generously to the call to personal holiness, so that together we may be effective witnesses in the world to the mercy and justice of the Lord. By his own example, Pope Francis will help us to have a special concern for the poor because in them we see and serve Christ himself. At the very beginning of his papacy, Pope Francis humbly asked that we pray for him. I invite you, then, to join with me in praying for our Holy Father, Pope Francis:

May the Lord protect him and grant him length of days. Amen.

May the Lord be his shield and deliver him from all harm. Amen

May the Lord grant him happiness and peace all the days of his life. Amen."

Archbishop Vincent will be celebrating a Solemn Mass of Thanksgiving at 5.30 on Thursday 14 March. All are welcome.