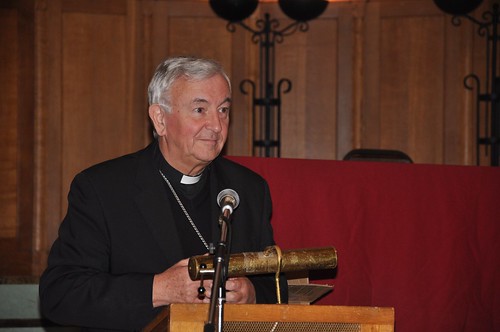 Human Dignity : What is it?

In an address to the Thomas More Society at Old Hall, Lincoln’s Inn on 25 June 2012, Archbishop Vincent Nichols spoke of tensions and perspectives surrounding the definition of Human Dignity and presented the Church’s understanding of human dignity as being a universal, unconditional, intrinsic aspect of our humanity.

He touched on historical definitions and dialogue, and proposed that human dignity means, in Michael Rosen’s phrase, the inner kernel of transcendental value or worth that persons have simply because they are human and irrespective of whether they ore others consider themselves to be thus valued.

Speaking of how human dignity is an intrinsic part of what it is to be human, Archbishop Nichols said:

“Upholding and transmitting the universal claim to the dignity of all necessarily affects the whole culture of the health and social care sector, and in turn influences the way people see themselves, whether or not they imagine themselves to be a burden on others.

Where the intrinsic human dignity of everyone is acknowledged as a fundamental value within a culture and society, it shapes and frames the cultural setting in which social care is carried out. A society in which there is a strong sense that people matter has a bulwark against the temptation to devalue particular groups or people, such as those suffering from acute dementia or the elderly.”