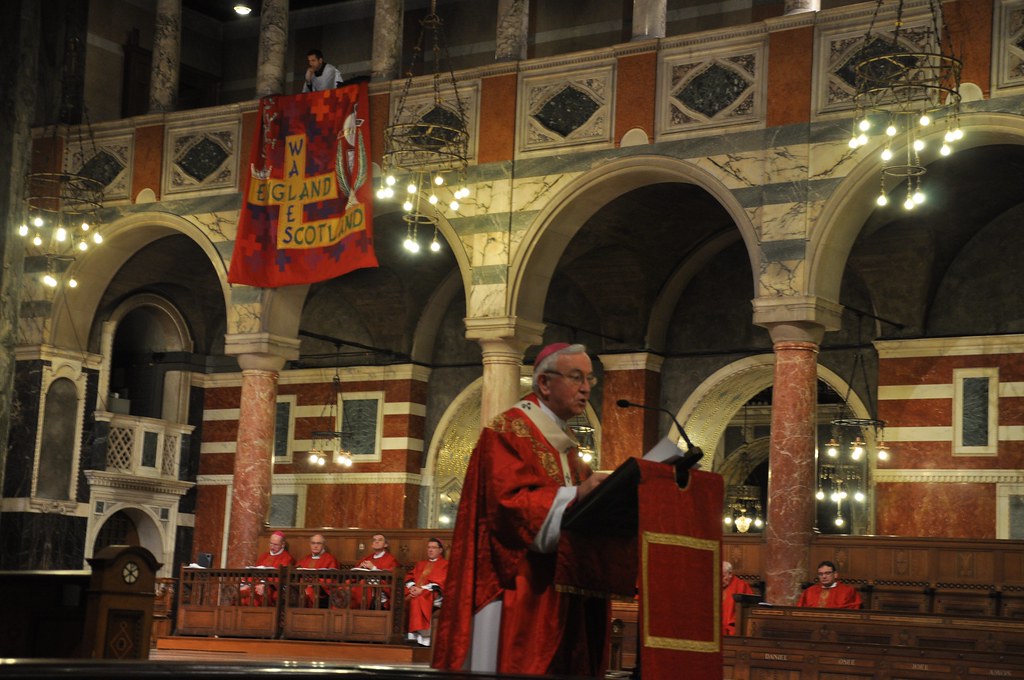 On 22 November, 1987, over 10,000 people from this land travelled to Rome for the Beatification of eighty-five of their fellow countrymen as martyrs for the faith. Today, twenty-five years later, almost to the day, we recall that event with great joy and we refresh in our minds and prayers the importance of the witness of these martyrs.

Their suffering and deaths, in the prisons and on the scaffolds of England and Wales, again put flesh on the words of the Gospel that we have just heard: ‘You will be brought before governors and kings for my sake, as evidence to them and to the gentiles.’ And what powerful evidence their suffering and deaths still are to this day! It is a powerful reminder of the unfailing truth expressed by St Paul, a truth we should hammer into our minds and embrace in our hearts: ‘God’s message cannot be chained up!’

Paul states his case so clearly:  ‘Remember the Gospel that I carry, ‘Jesus Christ risen from the dead, sprung from the race of David’; it is on account of this that I have put up with suffering, even to being chained like a criminal.’ And this is our hope and confidence too, for we, like our martyrs are ‘sons and daughters of the resurrection.’ (Lk 20.36)

These martyrs had direct and attractive ways of expressing this reality, this faith, this joyful hope. Blessed Nicholas Postgate described his forthcoming martyrdom as ‘a shortcut to heaven’. Blessed Joseph Lambton spoke words of encouragement to those who were being martyred with him by saying: ‘Let us be merry for tomorrow, I hope, we shall have a heavenly breakfast!’ Blessed Richard Simpson embraced the ladder and kissed its steps as he went to the gallows. Blessed Thomas Whittaker, who almost lost heart as he watched his companions suffer in Lancaster in 1646, found a firm and final resolve in the promises of Christ to his Church. They all were indeed ‘sons of the resurrection’ and held to that faith right through their dramatic sharing in the cross of Christ.

God’s message cannot be chained up! This message of hope and of eternal life to come cannot be silenced for it is, as we know, the work of the Holy Spirit and those who are filled with that Spirit are given a courage that will prevail.

Of the eighty-five martyrs we remember and honour today, sixty-three were priests. They knew the risk they took in embarking on their priestly mission in these countries. They did so, above all, to bring the eternal riches of the Holy Mass to Catholics here. One priest Blessed George Haydock, was already in prison when he celebrated his first Mass. Another, in different circumstances, was actually permitted to celebrate Mass on the day of his execution. But it was the Mass that mattered. This message cannot be chained up!

Twenty-two of these martyrs were laymen of different standings, professions and trades. They include married and family men. They were committed to the care and protection of their priests, for they too treasured the gift of the Mass above all other things. There are no women among this group of martyrs, for very few were ever put to death in that age. But many women, too, risked everything to play their part in the struggle for the faith.

England is blessed with the example and fruit of this loving cooperation between priests and people. There is still a strong bond of loyalty and prayer between people and priest in our parishes. And it is this which helps gives rise to ever-new vocations to the priesthood, for where the priest is esteemed and loved then other men will see the great dignity of that calling.

Among these martyrs is one whose name I share. And his story illustrates this point. Blessed Father George Nichols was arrested in May 1589 as he was celebrating Mass, with Blessed Father Richard Yaxley, in the Catherine Wheel Inn, in Oxford. Arrested with the two priests were two laymen, there to support and protect the priests. One was Thomas Belson and the other Humfrey Pritchard, the Welsh barman of the public house. They were together in their love of the Mass and together in the witness of their suffering and deaths.

A strong belief in the Resurrection as revealing the true purpose of our lives; a fervent love for the Mass and its transforming graces: these are two key truths witnessed to by our martyrs at the cost of their blood. And there is a third.

Today, in the Cathedral, we have one of the very banners that hung in St Peter’s Basilica in Rome for that ceremony of Beatification. Created in Liverpool and now hanging in the martyrs’ shrine in Padley, it links us to that day and to the words spoken by Blessed Pope John Paul II. He tells us of the third key truth attested to by our martyrs. He said:

‘The martyrs grasped the importance of that Petrine ministry. They gave their lives rather than deny this truth of their faith. Over the centuries the Church in England, Wales and Scotland has drawn inspiration from these martyrs and continues in love of the Mass and in faithful adherence to the Bishop of Rome. The same loyalty and faithfulness to the Pope is demonstrated today whenever the work of renewal in the Church is carried out in accordance with the teachings of the Second Vatican Council and in communion with the universal Church.

‘Central to this renewal, to which the Holy Spirit calls the Church, is work for that unity among Christians for which Christ himself prayed. We must all rejoice that the hostilities between Christians, which so shaped the age of these martyrs, are over, replaced by fraternal love and mutual esteem.’

Then he added that the same prayer should be offered as on the day, seventeen years previously, of the Canonisation of forty of the glorious martyrs of England and Wales. That day we prayed ‘that the blood of those martyrs would be a source of healing for the divisions between Christians.’ And today we make that prayer our own once again, renewing our commitment to close ties of friendship, prayer, dialogue and action with our brothers and sisters in Christ.

Today we praise God for his gift to the Church of these eighty-five martyrs. They all lived in our land, walked the same streets, under the same sky and appeared to their friends and neighbours as perfectly ordinary people. They show us that holiness is within our grasp. They were special only as we too strive to be special: in dedicating our lives to the Lord, in steadfast prayer, in generosity to our families, neighbours and friends and in our efforts to love our faith and live it day by day. May they continue to be our inspiration and may they continue to help us with their prayers. Amen.