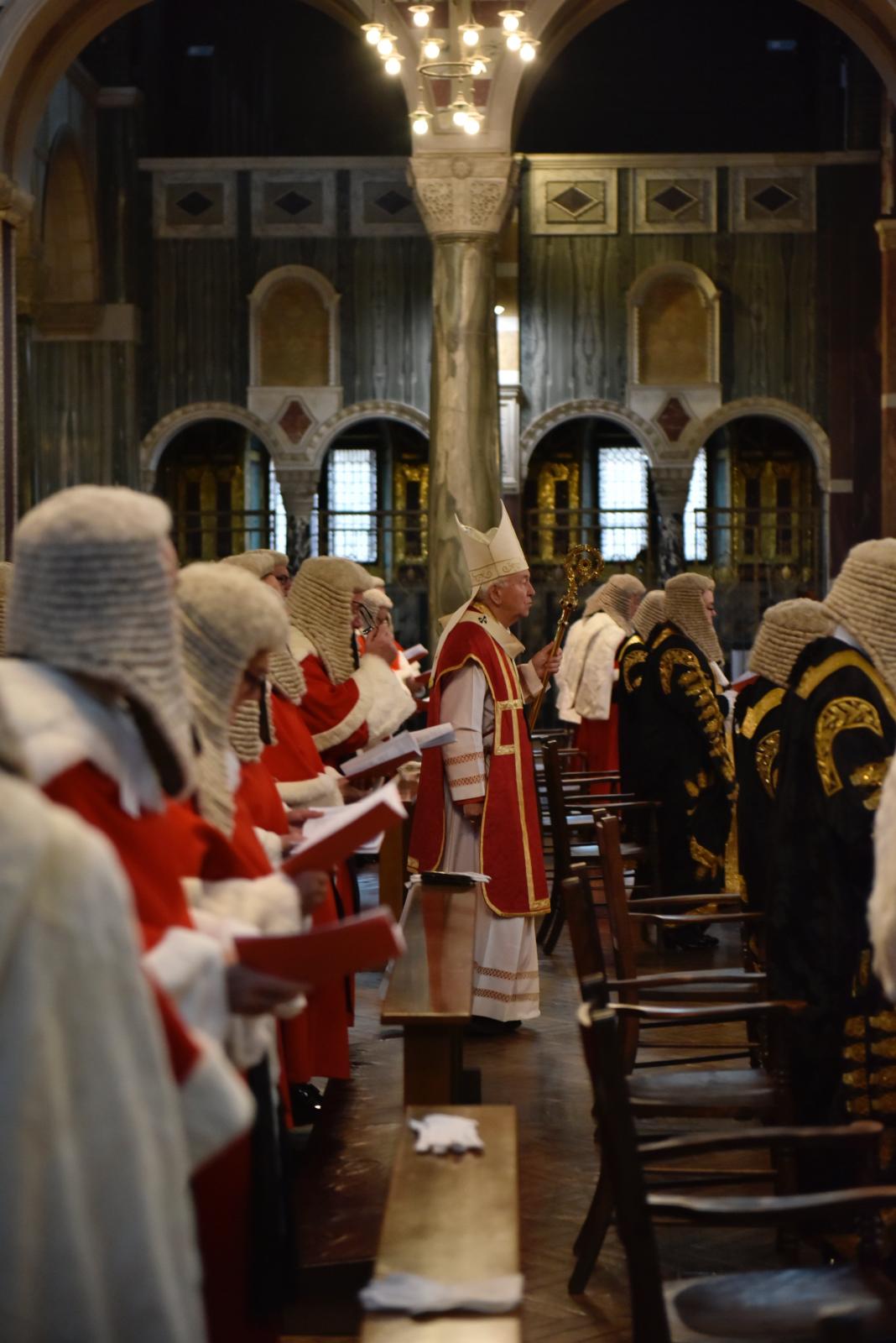 Given at the Red Mass on the first day of the new law year, 1st October 2021, in Westminster Cathedral

This Mass, this ‘Red Mass’, is a cry from our hearts for the guidance of the Holy Spirit. How right it is that, each year, we have this opportunity to pray for the strengthening of the link between the administration of our laws and the ultimate justice that is the gift of God.

I must begin by thanking you not only for gathering for this Mass today but for your work in the different fields of the law. I thank particularly those who hold the awesome responsibility that comes with the office of Judge. I thank you who are barristers and solicitors, those who support your work, and those who through the good offices of the Thomas More Society have helped to arrange our being here together, with due solemnity.

Every Mass begins with an admission of failure. This Mass is no exception. Though personal fault is of course the focus of our confession of sin, I have in mind also the awareness that the administration of the law is inevitably imperfect and limited. Here we stand before the One who alone knows all hearts, who alone is the whole truth, who alone is the source of true justice. Here we renew a resolve to couple our sense of inadequacy with a renewed sense of service with integrity.

Tensions in our society and culture are being laid bare with, it seems, increasing bluntness. Free, reasoned discussion is difficult to sustain, due in part to the ways in which views, convictions, resentments, are expressed, and in part to an increasing practice of listening only to those with whom we agree. The echo-chambers of social media can contribute to the corrosion of intelligent discourse and respectful dialogue.

This undermining of the deeper bonds of society is often expressed in the language of individual rights. There is, of course, a proper desire for the exploration of such rights, for a recovery of those that have been lost, or an establishment of those that have never been recognised. And this often becomes the work of our courts of law. Often you are faced with the fierce passion of resentment, recently described to me as ‘the great accelerator of strife and mayhem’.

At this moment, what can be the contribution of faith? In essence, this contribution lies in the insistent proclamation of the transcendent dimension of the human person, of the truth that every person is made in the image and likeness of God, comes from God and is destined for God. This truth of humanity is the source of our strong and unrelenting affirmation of the innate dignity of every human being. This is the witness of our faith: that every person is endowed with a dignity which rises from the Creator, and that without that horizon the dignity, and the duties associated with it, may easily be lost. Without that horizon, the esteem attributed to people will depend not on that first and fundamental criterion, but on their perceived usefulness, or on their access to a claim of rights.

It seems to me that the arena in which the administration of the law mainly takes place is that of human rights, and not of human dignity. Of course, dignity and rights are deeply connected, philosophically. But the law deals with codified rights rather than innate human dignity. Here lies the tension with which you live and which we bring before the Lord in this Mass.

Permit me one example. The recent case of Heidi Crowter. She argued that the provisions of the current abortion law are an offence against her in as much as that law allows for abortion up to full term if there are substantial risks that, if the child were born, ‘it would be seriously handicapped’. Heidi is a person with Down’s Syndrome. The judgement of the High Court found that the current Abortion Act was not unlawful as it aimed to strike a balance between the rights of the unborn and the rights of the women.

I fully understand Heidi’s cry: ‘The judges might not think [the law] discriminates against me, the government might not think it discriminates against me, but I am telling you I feel discriminated against.’ Her cry is rooted in her instinct for the innate dignity that is hers as a human being, made in the image and likeness of God. This is a line of argument that is not easy to include in a judgement over conflicting rights, which has no wider or prior frame of reference.

In the Gospel passage we have just heard, Jesus thanks his Father for the message that has been ‘entrusted’ to him, a message ‘hidden from the wise and clever’ and ‘revealed to mere children.’ This message, in turn, is entrusted to us, his disciples. The message with which we are entrusted points to the status of every person in the eyes of God, the love in which they are held, the forgiveness which is offered to them in repentance, at the cost of the death of Jesus, the Eternal Word of truth in our flesh and blood. Entrusted with the truth, we struggle to embody it in our words and actions, within the ambiguities of our human fragility and the limitations of our human constructs.

The words of Isaiah remind us that, from the beginning, the Spirit of the Lord is given so that those chosen for this gift might be the instruments through which the ordering of life, in all its justice, as intended by God, might be established. Our faith tells us that this radical order of creation is fulfilled as yet only in Christ Jesus while its promise is our lodestar and inspiration.

So today we rightly implore the Holy Spirit to guide and shape our best efforts that through the great blessing of our faith, we, in our turn, may be instruments of that justice and witnesses to its integrity.

May God bless us this day for all that lies ahead.

The Red Mass is celebrated each year in Westminster Cathedral on the first day of the law year, to call upon the Holy Spirit to guide the Judiciary and the legal profession to guide them in their work. The arrangements for the Mass are made each year by the Thomas More Society, whose membership comprises mainly Roman Catholic members of the Judiciary and the Bar as well as solicitors.