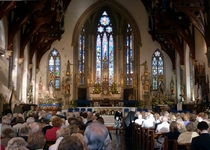 A Requiem Mass for Archbishop Faustino Sainz Muñoz took place in Westminster Cathedral on Friday 23 November at 5.30pm. Mass was celebrated by the Most Rev Vincent Nichols, Archbishop of Westminster.

Mass was attended by the Papal Nuncio, HE Archbishop Antonio Mennini; the Ambassador of Spain HE Frederico Trillio; the Ambassador of Honduras HE Mr Ivan Romero-Martinez and the Marshal of the Diplomatic Corps Charles Gray, as well as members from Archbishop Faustino Sainz Muñoz’s family.

During his homily Archbishop Nichols said: “A Vatican diplomat is, usually, first of all a priest. This is because he is dedicated to Christ and his day, every day, is formed and shaped in prayer. His work, too, whether in Church or State, is rooted in Christ as he seeks to accompany those in his care, support them, seek reconciliation with and for them and advance the great causes of human flourishing in the light and grace of the Gospel.”

“Archbishop Faustino brought that dedication to his task here in London throughout his years of service from 2004 to the close of 2010. And he brought wide and rich experience with him too.”

The full text of the homily is below
“The vocation of the Diplomat of the Holy See is to act in the name of the Holy Father and accompany a people in the life both of the Church and the State. The Apostolic Nuncio makes present in every particular Church and State the special role, entrusted to Peter and his successors, of strengthening the work of Christ and his disciples. Archbishop Sainz Muñoz fulfilled that role, for us, with love and dedication. We thank God for his ministry here. We thank God for the blessings given during his life. We pray for him this evening, together with his beloved family.

A Vatican diplomat is, usually, first of all a priest. This is because he is dedicated to Christ and his day, every day, is formed and shaped in prayer. His work, too, whether in Church or State, is rooted in Christ as he seeks to accompany those in his care, support them, seek reconciliation with and for them and advance the great causes of human flourishing in the light and grace of the Gospel.

Archbishop Faustino brought that dedication to his task here in London throughout his years of service from 2004 to the close of 2010. And he brought wide and rich experience with him too.

I do not know how he first reacted to the news of his appointment to London. No doubt he was delighted to find that the Nunciature was so near to the Wimbledon home of tennis. He could watch his much admired Rafa Nadal! But it was a little far from the Bernabeu, although his loyalty to Real Madrid never faltered.

But the diplomatic experience he brought here was immense:
1978 with Cardinal Samore bringing about the successful negotiations between Chile and Argentina in the conflict over the Beagle Straits;
1979 taking part in the first visit of John Paul II to Poland in which he described the applause during the Holy Father’s homily as marking the end of communism;
His presence in the Congo during the Rwanda genocides, making the Nunciature available as a refuge;
His mission at the EU in Brussels: his presence there over these last few days of failed negotiations might indeed have made the difference!

All of this work, clearly, was formed by his faith. As he once said: ‘Thinking changes, society changes, fashion changes. But the central concept of human dignity from conception does not change.’ Fidelity to these central beliefs and to the teaching of the Church was deeply in his heart.
He won our hearts and our admiration. He was held in great respect and affection within the Diplomatic community here in London. He formed bonds of great love and friendship with the bishops of these lands for whom I know I speak this evening. We thank God for his ministry among us, especially for his untiring devotion to the needs of the Church here.

I know that the highlight of his years of office was the great honour and thrill of receiving His Holiness Pope Benedict XVI into his home in Wimbledon and accompanying the Holy Father on his momentous journey to the United Kingdom in September 2010. We thank God for giving him the strength to complete that honour before illness set in and made public service no longer possible for him.

And, with great humility, we express our gratitude to his loving family for the way in which they tirelessly cared for him in these last years. He was, indeed, a brother to us all and we thank you for your family love and embrace.

During that Papal Visit to the United Kingdom, Pope Benedict insisted that the focus of attention must always be directed to Christ, our loving Lord. That is, of course, the message given by St Paul to Timothy in the reading we have heard this evening. His words are words of both exhortation and consolation. Paul reminds us to concentrate on Christ and on his presence among us. He is the Gospel we are to carry to the hungry heart of our society. It is not a theoretical proposition nor an ethical system that we want to put before people today. Our Gospel is a living person, who can change our lives and, therefore, our behaviour when we open our hearts to meet him and allow him to enter. In this we persevere no matter the obstacles, always seeking to draw people to Christ that he and he alone, may heal and restore them.

And St Paul offers us words of consolation; ‘If we have died with him, then we shall live with him. If we persevere, then we shall reign with him.’ Here is our sure and certain hope for our brother Faustino who certainly put his trust in the Lord, who certainly persevered in him and who, we pray, now knows him face to face. The Lord’s faithfulness to us endures forever, beyond every one of our betrayals, ‘for he cannot disown his own self.’

This truth, this promise, this consolation finds its expression in the flesh and blood of the risen Christ, as we hear in the Gospel passage from St Luke of the road to Emmaus. The Lord is faithful to those first disciples, grieving and confused. So, too, he is faithful to us in our every grief and confusion. He reveals himself to them. And he does so to us, too. The promise of eternal life is made flesh and shared in the Eucharist. And so it is with us, here, this evening in this celebration of the Holy Mass. We are again on the road to Emmaus and here refreshed in our hope and in our joy in the risen Lord.