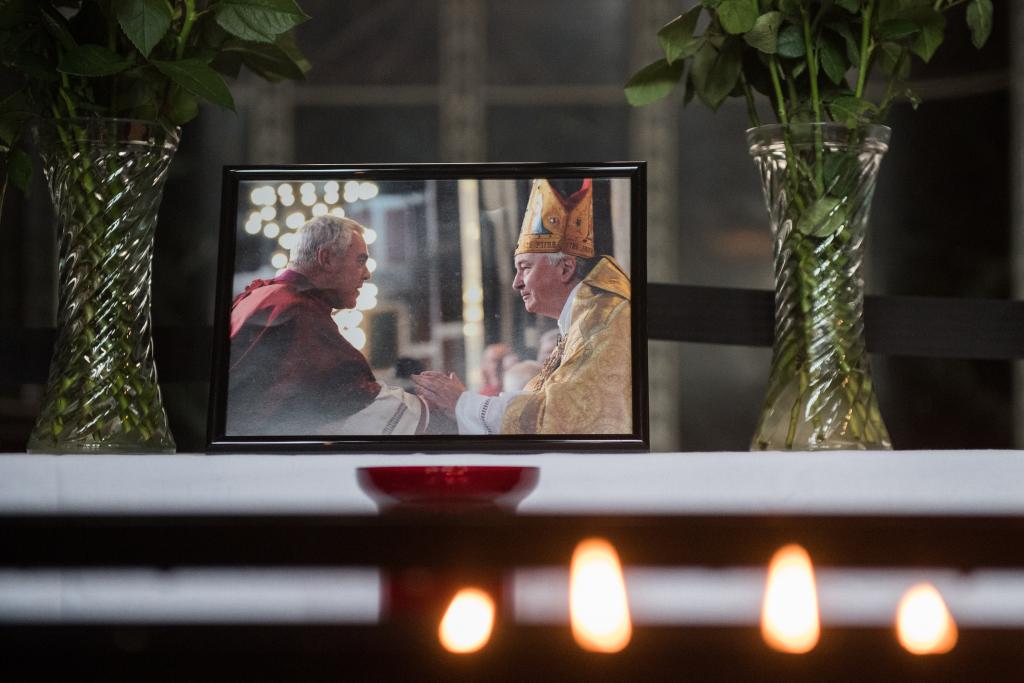 The Scripture readings we have just heard, and the witness of the life of Canon Christopher Tuckwell, for whom we pray, invite us today to a renewal of our faith in Jesus. This faith underpinned Christopher's life and ministry, giving him the stability and compassion of which we heard in the lovely obituary, at the beginning of Mass. Christopher must have repeated so often the words of St Peter: 'You are the Christ, the Son of the living God' and echoed those similar words of St Thomas: 'My Lord and my God'. His profession of faith, deep, personal, resolute, enduring, guided both the manner of his life and the manner of his dying.

Peter's profession of faith, in the narrative of St Matthew, has an important context. It takes place at Caesaria Philippi, a location northeast of the Sea of Galilee. Remote it might have been, but not insignificant. Its original name was Panias, after the Greek god of nature, Pan, for an ancient shrine to that pagan deity was located there. It was also the site of ancient Syrian temples, set aside for the worship of Baal. But most dramatically, Herod the Great had built a huge temple in Panias to the godhead of Caesar. Herod's son, Philip, had further embellished the marble temple and changed the name of the town to Caesaria, Caesar's town, adding his own too: Caesaria Philippi.

So it was before this huge monument to the Roman notion of the godhead, with its pagan ancestry, that Jesus posed the question: 'Who do you say that I am?' And Peter responds, in the face of the power of the place and the culture of his day: 'You are the Christ, the Son of the living God.'

The question, 'Who do you say that I am?' echoes down through the ages and knocks on the door of our hearts, too. Christopher's answer was unequivocal. We pray that ours may be so, too, even as we stand in the context of so many prevailing options and contrary claims, both worldly and some even pagan.

I was blessed to be with Christopher the day before he died. Our conversation was simple: hello; goodbye; prayers and love. He said to me, in his direct and uncomplicated way: 'I am really looking forward to meeting my Lord.' As I left he gave a final salute, the wave of a raised arm, calm and reassuring.

The gift of such faith is priceless. We search for it; we reach out for it; we rejoice in it as the most precious gift of all. The words of Jesus, addressed to Peter, apply again today: 'Christopher, you are a happy man, because it was not flesh and blood that revealed this to you, but my Father in heaven.'

St Paul revels in the gift of faith: ‘With God on our side, who can be against us? ... after such a gift ... he will not refuse anything he can give.' In Christopher, the gift gave rise to a quiet confidence and deep compassion.

Christopher carried that quiet confidence with him wherever he went: in his search for Catholic faith; in the world of the Army, latterly at the Wellington Barracks and with the Chelsea Pensioners; in his friendships and the good things they brought, and in his daily life of prayer.

He knew the assurance of St Paul, that 'nothing can come between us and the love of God made visible in Christ Jesus our Lord.'

From the rich tapestry of his ministry, there is one thread I would like to highlight. It is easily overlooked but for me, it is a golden thread. Did you notice, in the account of his life, which we listened to, that at each stage of his ministry, Christopher put himself into the company of the poor and the needy? He had a freedom to give of himself without anxiety.

As an Anglican ordinand, he spent his holiday as a nursing orderly; in St Vincent's, he took on the extra role of a prison chaplain; he did also in Hemel Hempstead, at HMP The Mount; and the same in Clapton, spending time with the prisoners in HMP Pentonville. During his years here at the Cathedral, he was a regular and willing chaplain and visitor to The Passage, happily spending Friday lunchtimes with the guests, listening and chatting, always conveying an unconditional compassion to those most in need. He lived the teaching of St Vincent de Paul: 'You will go out and meet the poor ten times a day and ten times a day you will see the face of Christ' (quoted in a letter from The Passage to Christopher shortly before he died, a tribute to his presence there).

Today we know so clearly that this golden thread of his faith in action is a powerful and needed witness in our society to the truth and beauty of our faith. As the effects of this pandemic unfold like thunder above our heads, this response to the poor becomes more and more a priority for us: our capacity to turn our eyes to the vulnerable, to those on the margins, and bring to them a gaze of the compassion of Christ and practical assistance. I thank God for the quiet witness given by Christopher in this way and I hope that he will inspire in each of us a similar, undemonstrative determination that they are not forgotten.

This Cathedral became his home. The Administrator's stall - there - his place of prayer, even when it was a struggle to get there and painful to remain. He gave himself, heart and soul, to this House of God, which he loved.

Cardinal Hume once described this Cathedral in these words: ‘Westminster Cathedral exists to help us search for God and to offer him worship. It is a house for all. It is a place where we meet Christ and, in and through him, gain strength and courage to take another step along the road to God.'

These words 'fit' Christopher so well. He made them his own in his ministry here. Today we pray that their affirmation finds fulfilment in him, too: that his journey to God, now ended in this world, is fulfilled through God's mercy and that Christopher now beholds his Lord, face to face.

Eternal rest give unto to him, O Lord, and let perpetual light shine upon him. May he rest in peace. Amen