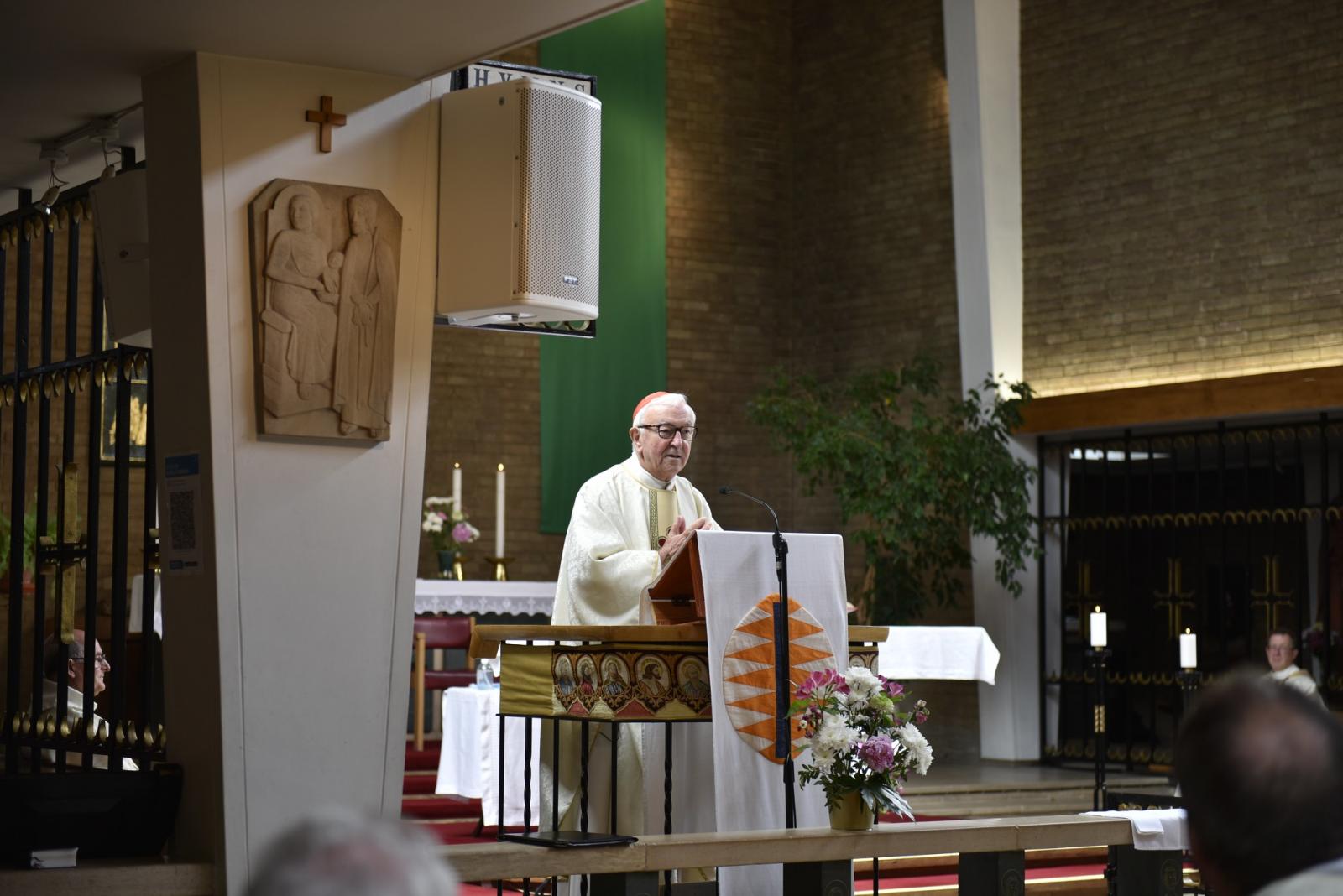 Given at the Mass on the Day for Priests, 7th July 2021, at Holy Apostles, Pimlico

I thank you for coming today, despite the thickets of regulations we have to observe. I welcome those participating via the live-streaming. Thank you.

Today’s Mass, in thanksgiving for the gift of St John Henry Newman, takes me back to my days in Birmingham. The Birmingham Post was part of my daily reading and there is one edition I remember in particular. It is the edition for 20 August, 1890, an archive edition, of course. It recorded, in great detail, the funeral rites of John Henry Newman.

Among other things, it described the wondrous sound of the great gathering of clergy singing plainchant, which, as it said, was used by kind agreement of the Oratory fathers who gave up, on that occasion, the preference for 'figured music'.

The newspaper included a detailed sketch of the sight of John Henry Newman's body lying in state. It was from that sketch, as I remember, that we could identify the crucifix that lay on his chest as the one found in the site of his burial.

The newspaper also gave vivid descriptions of the passage of the funeral cortege along the seven-mile route from the Birmingham Oratory in Edgbaston to the cemetery in Rednal. The streets along that route were lined with people who came out to give their last respects to a priest whom they loved. I have often thought that the crowds on the roads that day would not have read his books or letters. But all would have witnessed his priesthood.

One biographer of John Henry Newman has written this: 'It is easy to forget that he was a pastor of souls, sometimes burdened by the extent of human needs but always mindful that each personal history is unique.' Indeed for 45 years, the longest stretch of his life, John Henry Newman worked as a parish priest.

It is also worth remembering that at the outbreak of cholera he and another Oratory priest volunteered to go to the heart of the pandemic and work in Bilston. Even today Bilston may not be the most attractive of places, but as I recall, it has a very fine fish and chip shop.

Saint John Henry Newman is a patron saint for us priests.  We look to him in his ministry, in his pattern of prayer, and in his constant reflection and effort to present our precious faith to his contemporaries.

I take this opportunity today to thank each and every one of you for your ministry especially in the difficult and demanding times through which we are living. As one of our brethren said to me yesterday: 'This has been the most difficult challenge of our priesthood.' I thank you for your steadfastness, for your creativity, for your desire to keep in touch with your people in new ways and old.

Another moment in the ministry of John Henry Newman can remind us of the importance of simple things in our priesthood. As an old man he walked, through the snow, from the Oratory to the Cadbury factory in the Bournville suburb of Birmingham. He went to plead that the Catholic employees would not be obliged to attend a daily Bible study session. He was close to his people, as we are to be too, in our turn. Indeed after these long months of isolation, rekindling that closeness, that familiarity with the stories of every family, can properly be among our priorities.

Now we are coming up to a moment of change as on the 19th of July nearly all the legal restrictions associated with this pandemic will be removed. This, too, will not be an easy moment for us as we try to find a way forward that respects both the energy and enthusiasm of those who want to press ahead and the anxiety and fear of those still deeply troubled. I hope that in the next week or so we can provide some advice which will sketch ways forward and around which we can hold together. But at this moment and overall I would simply ask you to take this period gently. Let us move gradually, especially during the summer months, so as to respect the anxieties of the weakest while taking steps towards a fuller celebration and participation in our shared life of faith.

As we enter more deeply into the prayer of the Mass it is customary, on this day, to name and pray for all those of our brothers and who are celebrating special anniversaries of their ordination in the current year. Last year we did not meet for this Mass so I now have a rather long list of Jubilarians for both 2020 and 2021. (The lists of names were read out). We thank God for the ministry of these good priests and we ask the Lord to bless and sustain them as their ministries continue into the future.