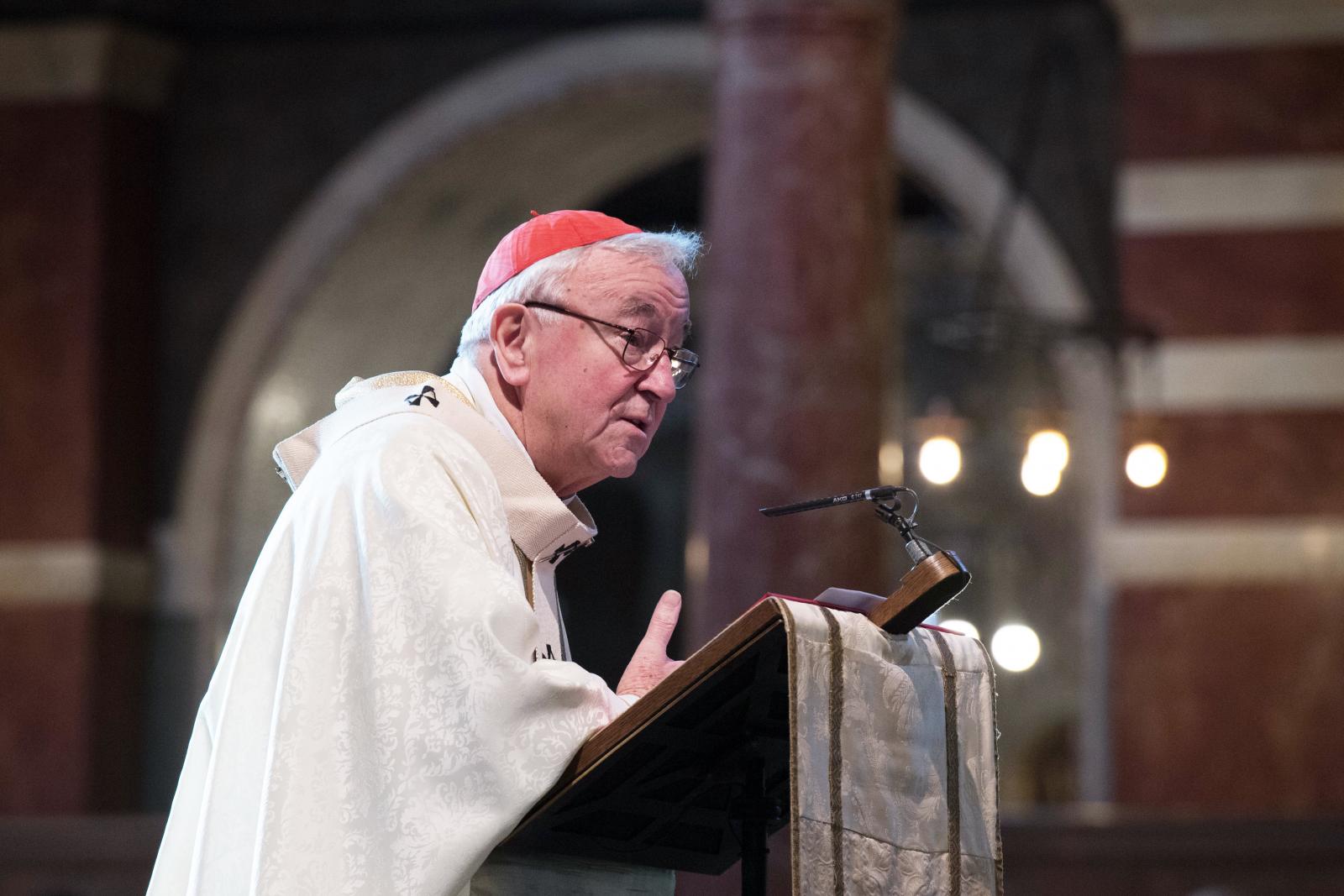 This Mass to mark the 40th anniversary of the founding of The Passage may be late, by a year, but we are not short of gratitude and thankfulness.

There is much in the story of these 40 years for which we are thankful: for the initiative of Cardinal Hume and the Daughters of Charity in 1980, in response to the homelessness on these streets; for the continuing link between The Passage and this Cathedral; for the dedicated work of the staff and its leadership; for the steadfast support of countless volunteers; for the guidance of every one of its Trustees; for all the generous funding that has been given, in amounts great and small; for its Royal Patronage given by Prince William who was first brought to The Passage by his mother and with his brother, Harry, in 1993. How much we keep them in our prayers in these difficult days.

What started as a simple night shelter has grown and developed very significantly. The Passage now encompasses three teams: one directed to outreach to those who are sleeping rough; one helping them to gain support and stability and one proving a housing options service. It also has three residential projects: The Passage House, Montfort House and Newman House, seeking to provide a pathway to long term accommodation. Remarkable!

We know the problem of homelessness, and its associated needs, is ever present. The latest initiative, under the banner ‘No Night Out’, seeks to strengthen the capacity of The Passage to offer immediate accommodation to all in need. This great work must go on.

But this evening we are here in the Cathedral, or taking part through the live streaming of this celebration of Mass, for a very specific purpose. We are not here to sing the praises of The Passage, or to applaud all involved in its work. If we want to do that then we go to a different kind of gathering. We are not here for a moment of mutual congratulation.

No, our purpose this evening is bring all this work to our Heavenly Father, thanking God for what has been achieved and making of our efforts an offering to him. Every Mass, at its centre, is an offering. It makes present again the sacrifice of Jesus, to the last drop of his precious blood, that we might live life to the full. This evening we add our humble efforts to that sacrifice. We offer all that we achieve as our participation in that great act of redemption. We are joined to Jesus in faith and grace. We join our labours to his and joyfully make of them an offering to our Heavenly Father. In doing so we whisper in our hearts the simple words: ‘We are your servants Lord. We have only done our duty’ (Lk 17.10).

The service of the poor, in this work of The Passage, takes us to the radical heart of our faith. In his book ‘Dominion’, Tom Holland makes clear the fundamental challenge of Christianity to the world into which Jesus was born. We tend to think that the claim of the divinity of Christ is the radical newness of our faith. Yet the Roman world, at the time of Jesus, had no difficulty accepting the divine claims of its emperors. Caesar Augustus was declared to be a god. He had achieved the highest place in this world and slipped easily into godhead. No, the startling claim of Christianity was that this poor man, this outcast who was executed among thieves, was indeed the fullness of the One, True God in our midst.

In this everything was turned upside down. Worldly success mattered little in the pathway of salvation being revealed in him. Human hierarchy was being overturned. Now the poor were taking pride of place, for God had chosen to place himself among them.

The Passage is built on that conviction. Its guiding spirit is that of St Vincent de Paul. His words are constantly repeated in its work and motivation: ‘You will go out to the poor ten times a day, and ten times a day you will see the face of Christ.’ The achievement of The Passage is that it never loses that perspective. Indeed in the work of refurbishment, the placing of the images of Jesus, and those referring to St Vincent, were demanded by the poor clients coming in each day. One eloquently expressed himself by writing on the outside wall of the Centre the words ‘God lives here’. Indeed he does.

Here then we touch the essence of The Passage: the conviction not only that every person is precious in the eyes of God, endowed with a true dignity and enriched by particular gifts, but also that the emptiness of poverty can make great space for the richness of God. Our service of the poor, then, is our effort to see and appreciate that truth, to place ourselves alongside those who are poor in the hope that together we will receive gifts beyond compare. In the presence of poverty, for all the ugliness it can bring, we are on the threshold of God’s kingdom.

Today is the Feast Day of the great English saint, the Venerable Bede. He died on this day on 735 and is known as the Father of English History. He, too, lived a life of poverty, freely chosen, in the Order of St Benedict. At his death he wanted to share his possessions with his brethren. They were brought to his bed in a box: some pepper and napkins and some grains of incense. Clearly, his treasure lay elsewhere.

I mention Bede because in its Anglo-Saxon origins his name is connected, in meaning, with the words ‘bidding’ or ‘command’. So, in his very name, Bede points us to the Lord’s great command, given, according to St John, as his final and lasting instruction:

‘Do you understand what I have done to you.... If I then, your Lord and Teacher, have washed your feet, you also ought to wash one another’s feet. For I have given you an example, that you also should do just as I have done to you. Truly, truly I say to you, a servant is not greater than his master, nor a messenger greater than the one who sent him’ (John 13.12-17).

This evening, then, we bring to our Lord and Master our labour, our offering, which we carry out in his service. We thank him for the opportunity he gives us to do so, knowing that in the poor we meet him, and serve him, and do so with gratitude, holding in our hearts his words: