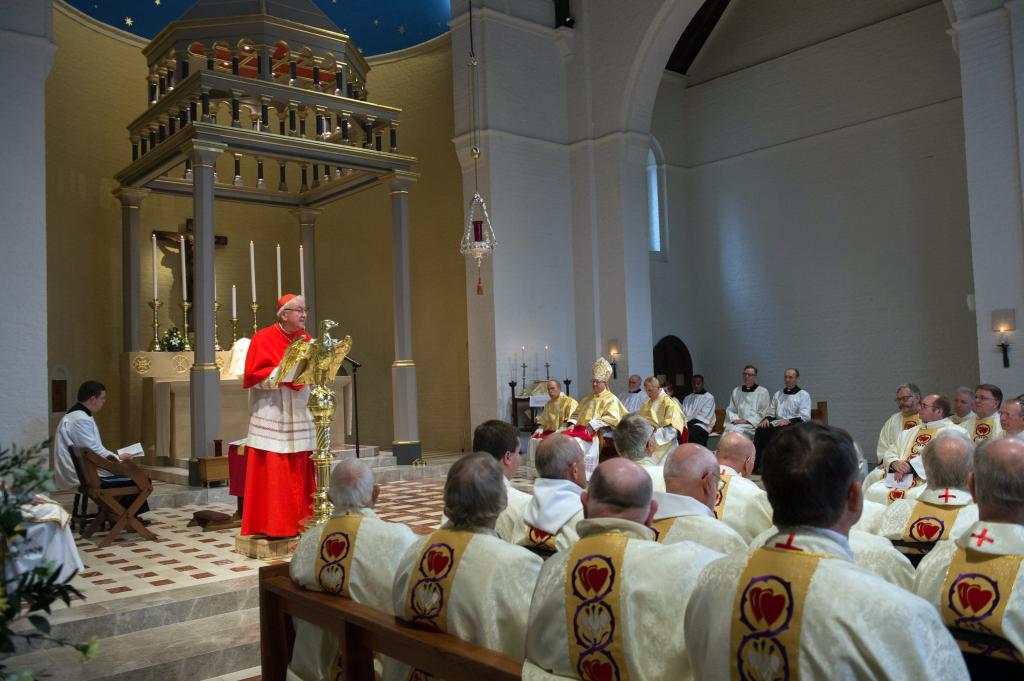 Homily given by Cardinal Vincent Nichols at the Mass of thanksgiving for the 10th anniversary of Anglicanorum Coetibus at the Church of the Most Precious Blood, Borough, on 9th November 2019.

‘In recent times the Holy Spirit has moved groups of Anglicans to petition repeatedly and insistently to be received into full Catholic communion individually as well as corporately. The Apostolic See has responded favourably to such petitions. Indeed, the successor of Peter, mandated by the Lord Jesus to guarantee the unity of the episcopate and to preside over and safeguard the universal communion of all the Churches, could not fail to make available the means necessary to bring this holy desire to realisation.’

As you well know, these are the opening words of the Apostolic Constitution, issued ten years ago which, two years later, gave rise to the Personal Ordinariate of Our Lady of Walsingham for England, Scotland and Wales, as well as those in the United States and Canada, and in Australia and Japan.

Today we thank God for these expressions of Catholic life and faith and ask God’s blessings on their growth and mission.

Ten years is not a long time. Eight years is fewer still. Perhaps that is why the choice was made of our first reading at Mass today, of the words of Jeremiah: ‘Ah Lord God: look, I do not know how to speak: I am a child!’

Young, maybe, but that youth is no excuse for not having a heart ready to respond to the call of the Lord, issued in that Apostolic Constitution.

The call of the Lord is always twofold: to be in communion with him, for without him we can do nothing; and to share in his mission, received from the Father, that all might be one. And this call has as its sign and sacrament the Church.

‘The Church, a people gathered into the unity of the Father, the Son and the Holy Spirit, was instituted by our Lord Jesus Christ, as “a sacrament – a sign and instrument, that is, of communion with God and of unity among all people.” Every division among the baptised in Jesus Christ wounds that which the Church is and that for which the Church exists; in fact, “such division openly contradicts the will of Christ, scandalises the world, and damages that most holy cause, the preaching the Gospel to every creature.” Precisely for this reason, before shedding his blood for the salvation of the world, the Lord Jesus prayed to the Father for the unity of his disciples. It is the Holy Spirit, the principle of unity, which establishes the Church as a communion.’

In these words, Pope Benedict began to indicate the particular characteristics and mission of the initiative he had taken. They have been well expressed in two simple phrases: ‘to be a bridge for the unity of Christians’, and ‘a force for true ecumenism’, especially in relation to the great Anglican tradition of Christian discipleship which, in its history and practice, contains, expresses and lives so many of the means of sanctification and truth given to us by the Lord.

Communion with Jesus is the first requisite of every disciple. It is, of course, our Catholic belief that this communion is not only a spiritual communion but one made visible in structures and signs. The fullness of this communion is a complex reality formed of a two-fold element, both human and divine, the Church. And this visible structure finds a focal point in the successor of St Peter and the bishops in communion with him.

Today we mark a pathway of discipleship and of visible communion which strives to integrate into this fullness of communion, in both spiritual and theological terms, gifts which have their source in the graceful life of the Anglican communion. We are grateful for this, especially as people of England where many of these gifts have been fashioned.

The Personal Ordinariates are often described as expressions of realised ecumenism: a fragment, an indication, a pointer to how fullness of communion can be found in a journey of reciprocal exchange of gifts. For this to be achieved, it is crucial that the communities of these Personal Ordinariates do not live in a space of isolation but are at ease, and welcomed, in the full communion of which they have become part. Members of the Ordinariate are Catholics of the Latin Rite within the full communion of the Catholic Church. This is no ‘half-way house’ as some might be inclined to think.

Perhaps this is indicated for us in the words of the Gospel of St John which we have heard. There is only one vine: Jesus, and one vine dresser: his Father. So we are told: ‘Remain in my love’, ‘keep my commandments’, ‘love one another’, ‘I call you friends’, ‘I chose you and I commissioned you to go out and to bear fruit that will last’.

Writing in 2015, Mgr Mark Langham spelt out some of the strengths which are given and received within this communion and for its mission. There is a certainty about the gifts of the sacraments, their shape and effectiveness. There is the solidity of the communion, which is never to be impaired or partial. There is, nevertheless, a diversity on which the communion can thrive, a coming together of traditions and customs.

He makes strong play of this last point: the championing of elements of the traditions of Anglicanism that can re-introduce Catholics in this country to their own deeper Catholic heritage. In this he was thinking of the sources of Medieval English Catholicism: St Richard Rolle, Julian of Norwich, St Edith of Wilton, St Wilfred, St Frideswide, virtually unknown to modern English Catholics, like myself, but coming again to the fore in the prayer and life of the Ordinariate. To these, too, can be added so much of the English Anglican Divines, Lancelot Andrews, Thomas Traherne and John Keble. This stream has also given to us all the great new Saint of our land, St John Henry Newman, your own patron, the joy of whose canonisation resounds throughout the Christian life of the world.

Writing to Timothy, St Paul exhorts him to be utterly dedicated to the preaching of the Good News, making it ‘your life’s work’. This is true for all of us. And for this task we have to employ all our gifts and treasures. A profile of the rich and varied face of the Catholic Church which reflects most clearly its rootedness in the fabric of this culture and heritage should be a strong contribution to our work of mission. For this pray today.

But I must end in Walsingham. At this time we are exploring more deeply, and rejoicing in more fully, our country’s title as the Dowry of Mary. Her statue is travelling our land. I trust that you, members of the Ordinariate of Our Lady of Walsingham, are playing your full part in every one of those visits, for you will know the power of Our Blessed Lady to draw people back to her Son. She is the star of the new evangelisation, an evangelisation which we need so keenly. She is the one who will share with this nation her seven great joys, at a time when in the public mood joy is in short supply. She looks to you, who have been given her in your title, to be at the forefront of this shared effort.

Our Lady of Walsingham, pray for us, bless this your Ordinariate and bring to our hearts your joy, your graciousness and your love for your Son. Amen.