Homily for Mass of Ordination to the Diaconate 2021 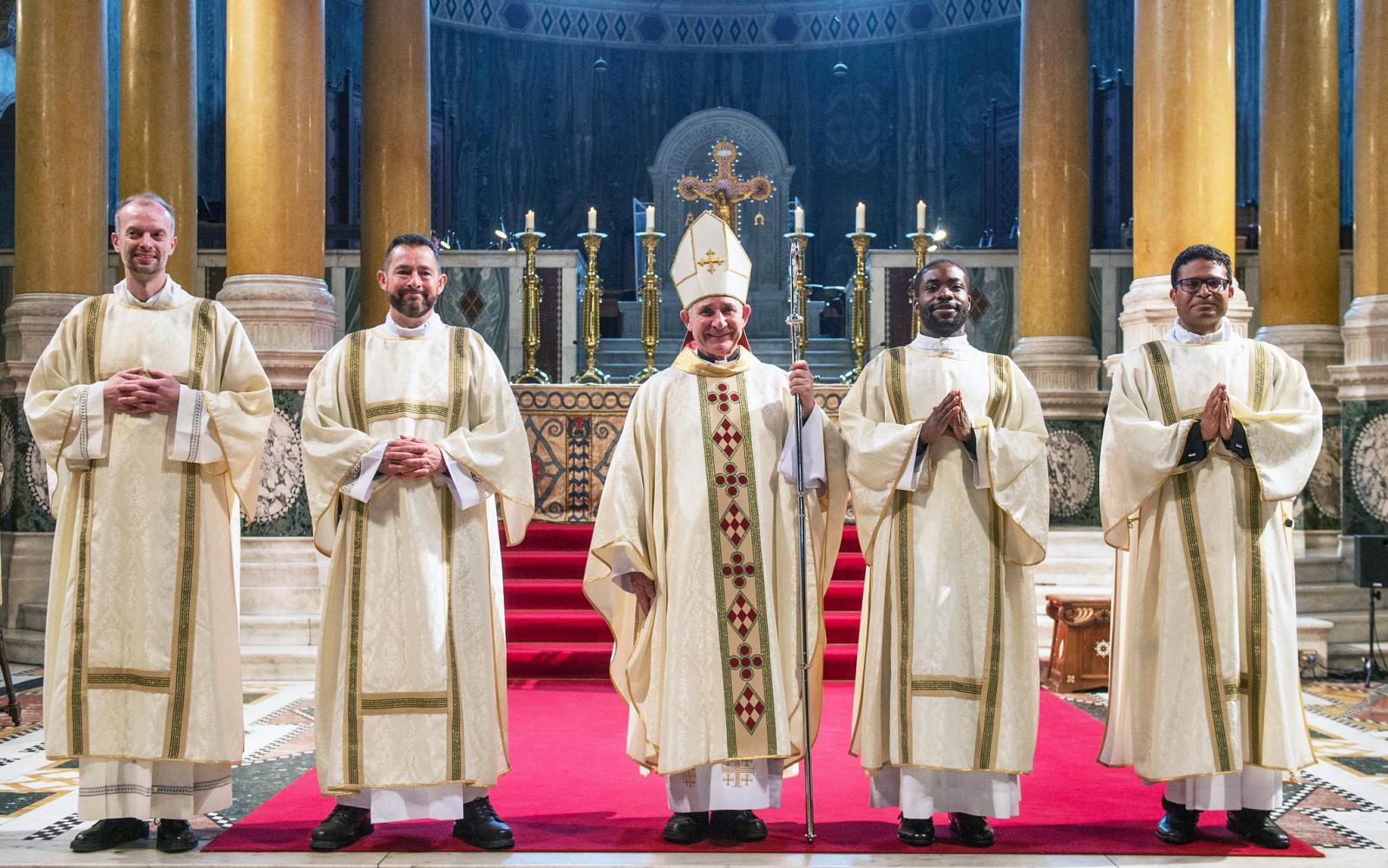 Given at the Mass of Ordination to the Diaconate, celebrated on the Memorial of the Immaculate Heart of Mary, 12th June 2021 at Westminster Cathedral.

The mood of an ordination ceremony is always one of rejoicing. John, Daniel, Matteo and Michael, we rejoice today as you are ordained deacons. The Diocese of Westminster, the Congregation of the Missions, the Vincentians, John’s religious order, and the whole Church rejoice believing that God has called you, that you have responded and are prepared for service.

That mood is reflected in the line from the psalm, ‘My heart exults in God my saviour’, words that we associate with Mary singing her Magnificat in the hills of Judea. We ordain you on the Memorial of the Immaculate Heart of Mary. Mary, our model who is described as being ‘full of grace’, full of God’s love, within her there was room only for the love of God.

We will hear the word ‘consecrate’ again today. It is contained in the promises you will make. Today it is you who will be consecrated, you will be asked to freely consecrate yourself, set yourself apart to be free to serve the Church. You and all present will hear the words, ‘By this consecration you will adhere more easily to Christ with an undivided heart; you will be more freely at the service of God and mankind’. It reminds us of the words of Jesus, ‘no greater love hath anyone than to give his life for his friends’.

Pope Francis, in his book ‘Let us Dream’, which is providing inspiration to so many, speaks of a biblical character who was called by God and then lost his way. Pope Francis says of him, ‘he became lax in everything, but especially in the one thing we cannot be lax about, worship of God, the source of all his gifts. Included in your promises today you will be reminded to be faithful in praying to the Divine Office. It is an important way that we who are ordained show that we are involved in and attending to our Father’s business, praying for the world.

No doubt you are here today because you did precisely what Mary did in the last line of our Gospel reading, ‘she stored up all things in her heart’, or, as one translation has it, she put everything together, she reflected on all her experiences to discover what was being asked of her. I am sure you did something similar, you put everything together, and were to detect a movement in your life which could only be explained by acknowledging God was revealing himself, being active in your life. Perhaps it was in the peace you knew when you thought of the diaconate and priesthood; the affirmation you received from friends and formators when experiencing doubts; maybe the apparently throw-away line of an acquaintance, but was really designed by God for you personally, that found its way into your heart and confirmed that He was calling you to commit your life to him in the ordained ministry.

Today the Church ratifies that call of God by ordaining these four men as deacons. Their task will be to serve and to proclaim. To serve God’s people and to proclaim the Gospel. There will continue however what we call ‘a search for God’, for He is always a mystery, always we need to try to uncover him, discern his presence, and desire to keep his company.

Mary and Joseph searched for Jesus in the Gospel of today. Where did they find him? In the temple, the place of worship, that is instructive. Though the temple, it is not the only place we go to serve or to find God.

In the pandemic, we were all affected; a countless number were also afflicted, by illness, by poverty, by shortages of provisions, unable to provide for their families. The need to support became evident very quickly. It is acknowledged widely that the Church had influence at community level and through social action alleviated need.

Through such activity the Church carried out its mission of service and proclamation of the Gospel. We call to mind the words of Pope Francis calling us to be a Church for the poor and with the poor. Do what Christ did.

A deacon ordained to serve and proclaim is well placed to deepen his awareness of the encompassing love of God which stretches far and wide, a love which lifts up, as the psalm said, ‘the lowly from the dust’. A love which encourages us, as agents of God, to be with both the materially and spiritually poor in a meaningful and effective way.

Jesus explained to his parents in our Gospel that he was going about his Father’s business. May that sense of what is truly important accompany these men as they go about their daily work.

As they are ordained today, they will be familiar with the words Jesus spoke to his closest friends, ‘You did not choose me, no I chose you’. John, Daniel, Matteo and Michael we thank God for choosing you, we are grateful to you as well for accepting his call.