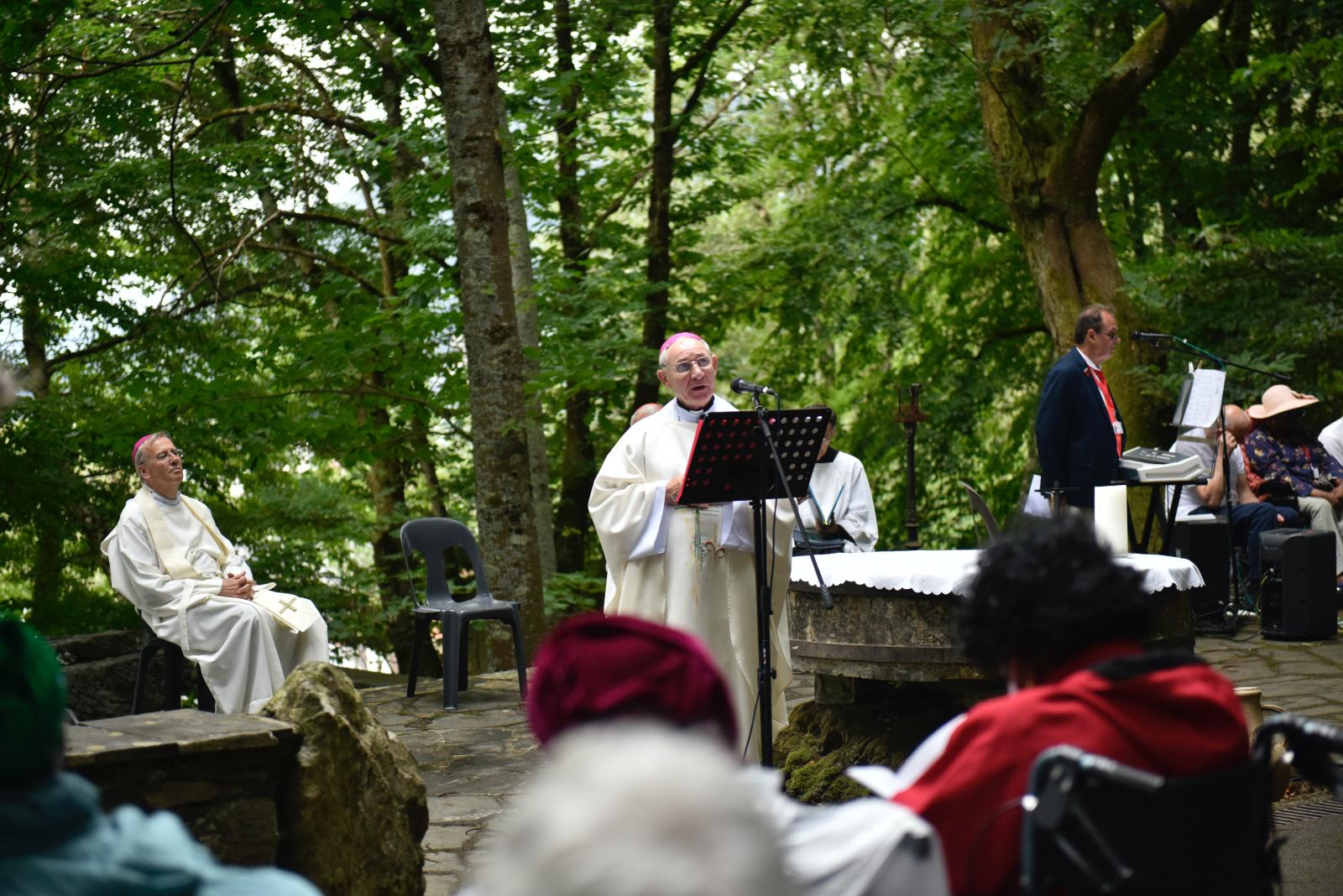 Given by Bishop Paul McAleenan on 25th July, at Cite St Pierre

Well, it is did wonderful for us to be back again here in this particular place where we can be conscious, as our welcomer said, of so many themes: of silence, the beautiful silence and also creation itself as we offer this Mass. The Cite St Pierre, as our welcomer told us, was a wish of Bernadette. It was her wish that accommodation would be established here and shelter and provisions given to those families who are in great need, those who would be unable to stay in the hotels of Lourdes. And so many families still come to find hospitality, prayer and hope for the future.

Mary in her time in Israel belonged to a group known as the Anawim and they too were the poor ones. Those who had nothing, except God. And when you have nothing, you have a choice. You can become desperate, you can be anxious, you can be worried. Or you can put your hope in the only one who can help you and the Anawim. This group, they were totally and utterly dependant upon God and they put their faith in him.

The Anawim are also renowned by the fact that they believed that God would keep his promise to send a saviour. Some in Israel had lost faith in that promise but the Anawim did not. They believe that God kept his promise and indeed, as we heard in the gospel, it was a great blessing for humanity when God chose Mary to become mother of his Son.

But the gospel told us that Mary was greatly disturbed. When she was told, she is the mother of God, she didn't immediately began rejoicing and dancing. She was greatly disturbed, her world was turned upside down. And yet, as we heard, she said, 'let it be done to me, according to your will'. As we know after the Annunciation, after this story, Mary went to the hillside, perhaps a hillside something like this and she met Elizabeth who said 'blessed is she who believed that the promise made to her by the Lord would be fulfilled'.

And on the hillside of Judea, Mary began singing. It was then she began rejoicing, singing a song that continues to this day. The Church sings it every evening in her liturgy: the Magnificat. In the Magnificat, there are some very important words in which Mary says that, in her nothingness, God looked upon her and henceforth all generations will call her blessed; and we are among the generations that call Mary blessed. We see in her one whose faith was totally pure, totally pure to the degree that God was able to work in her and elevate from nothingness.

Of course, God called so many people and they did follow his will. God called Moses and Jeremiah, and so many prophets, but initially whenever God called them, there were excuses. You know, how it's easy to pray, God use me as your servant but I will be your agent. But whenever God gives you tasks you say 'well actually that's not what I meant'.

That's what even the great prophets did, but Mary's faith was so pure. Mary's heart was so pure, even though she was greatly disturbed, she said yes. No excuses at all. And that's what reveals what our Mother Mary is truly like. She gave herself completely. She is our Queen and our Mother.

St Therese of Lisieux said, 'how I love the Blessed Virgin, she is more of a mother than a queen' and perhaps, we too might feel like that as well. More of a mother than a queen. But of course, we have to understand what is meant when we say Mary is Queen. As queen she's not someone who's removed because, in the mind of humanity, kings and queens were always supposed to care for the people, to love the people, to promote justice and harmony, not removed from the people.

So Mary indeed is our Queen and she is also our Mother. And as Queen of All Creation, she is interested, concerned, and has the ability to influence everything connected with life: creation, unborn life, our family life, our troubles, our concerns and especially here in Lourdes, we can bring everything to her.

The last time Mary is mentioned in the New Testament, she's in the Upper Room. She's with the Apostles, they're waiting for the Holy Spirit and Mary's role, then as now, is to keep all her children, all the disciples of Jesus together. And isn't that the wish of every mother? That her children would stay together, would be faithful to each other, would support each other?

One way in which we can truly love and honour Mary is by being faithful to each other. I'm not sure how many times Pope Francis has spoken about gossip and how dangerous gossip is and how it really can ruin a community. We can be truly Mary's children when we really care for each other, are concerned for each other and also concerned for the poor, just as Mary was.

As the family of Mary, we pray frequently the Hail Mary, and sometimes we say it so frequently we are not aware of all the words that we use. But there's a particular phrase in the Hail Mary which I often meditate on and it's those words, 'Hail Mary, full of grace'.

So indeed we honour her as our Mother and our Queen, and we could do that very well, here on our pilgrimage in Lourdes.