Homily for Sunday of the Word of God 2022 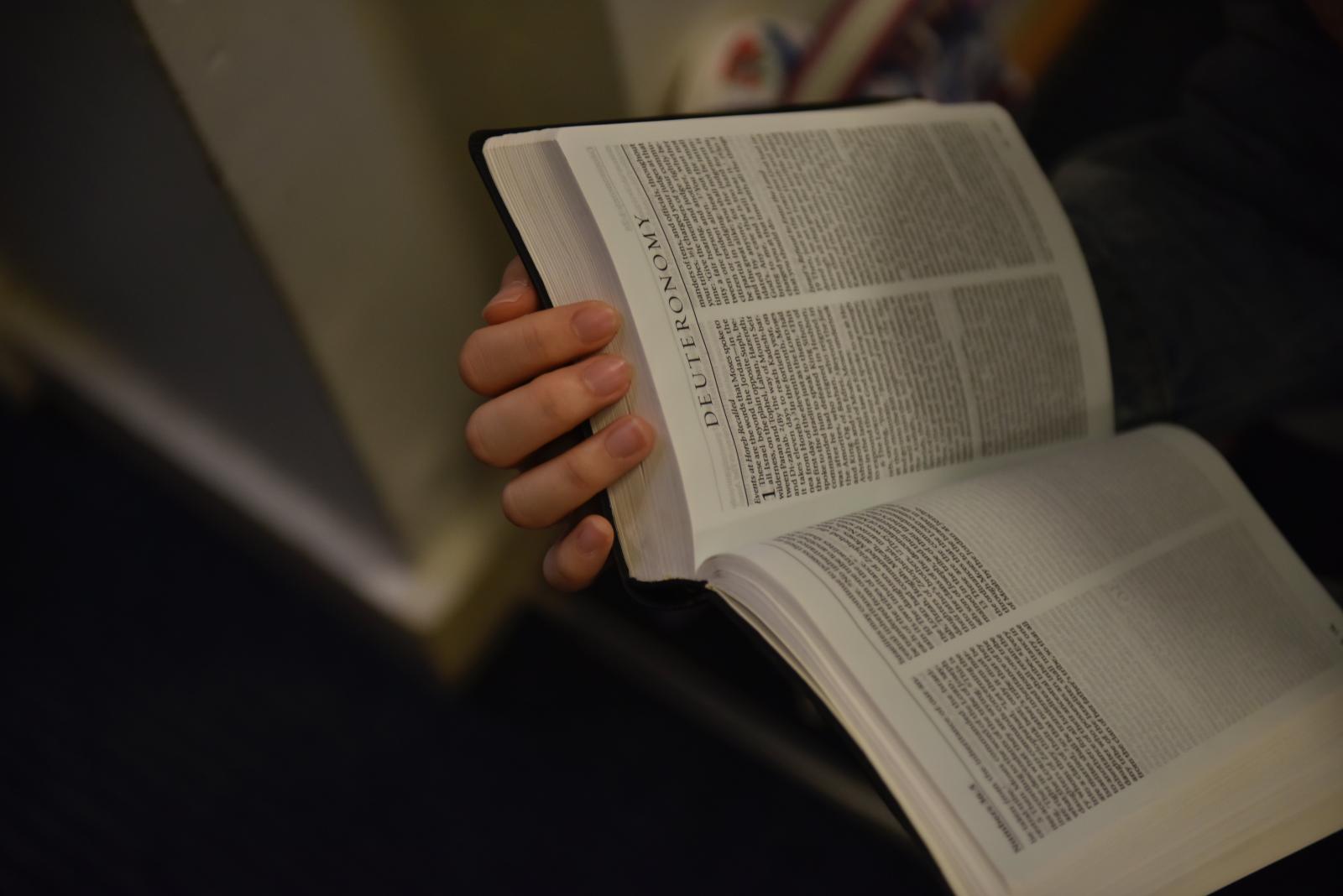 Given at Newman House by Bishop Nicholas Hudson on 23rd January, Sunday of the Word of God.

‘The Word was made flesh; he lived among us.’ A phrase which resonates deeply within us, not least because we hear it proclaimed every Christmas night. Today that Word reveals himself as the fulfilment of the divine Word revealed in Holy Scripture. As he rolls up the scroll of the prophet Isaiah, he tells those assembled, ‘This text is being fulfilled today even as you listen.’

This much we gather from a reading of Scripture barely ten minutes in duration. How our Liturgy of the Word contrasts with that recounted by Nehemiah, of a reading from the Book of the Law which lasts, what, some six hours? From early in the morning till noon! Longer readings of Scripture are not completely foreign to us, of course. We’ve all experienced the power of hearing the whole of the Passion proclaimed every Palm Sunday and Good Friday. There’s a tradition in some countries of actors reciting the whole of Mark’s Gospel in theatres. Bishop Arnold, who will be known to some of you, learnt the whole of Mark’s Gospel by heart. Yes, he must have a photographic memory!

It also means he’s steeped in it. To steep ourselves in Scripture: that’s something I suggest we should all aspire to as people of the Word. I have a friend who told me he was feeling moved by the Spirit to pray the Scriptures more. And it occurred to him that, since it was the Year of St Paul, he might begin by reading all of Paul’s writings. He did so with a pencil in his hand, marking the sentences or phrases which touched him most deeply. Then he prayed each passage. It took him a year.

Next, he felt the Spirit calling him to do the same with the Psalms. He found such richness there that it took him well over a year to pray the passages he’d picked out. But the way he describes the experience is striking: he says that it felt as if he really inhabited those passages of Scripture. He felt he was inhabiting God’s Word.

His description called to mind for me one of the more mysterious sayings of Jesus, as recorded by John, where Jesus says something precisely to do with this: habiting, inhabiting, when he says, ‘Make your home in me, as I make mine in you.’ I think we all of us readily grasp the second part of that statement, ‘as I make mine in you’: as Christians, we ask Jesus almost instinctively to dwell in us, to make his home in us. But, for us to make our home in him? Now, that is more mysterious.

As I reflect on it, I’m convinced that part of it is about inhabiting the Word we meet in Scripture; making ourselves at home there. Taking to prayer certain phrases, imagining particular passages, of Scripture is a well-trodden path towards this goal.

Nor should we allow ourselves to be put off by passages we find difficult. We shouldn’t let ourselves be distracted by the less comprehensible sections of any passage of Scripture. Your own patron, St John Henry Newman, was particularly helpful on this point. ‘All Scripture has its difficulties,’ he would say. ‘But let us not, on account of what is difficult, neglect what is clear.’ And he goes on to say, there are many things in Scripture which we might discover in Scripture but fail to see. That should make us open to others’ interpretation. In other words, the fact that we discover there riches for ourselves should make us open, if we were but humble enough, to welcome the riches others encounter there too.

Bernanos, in his Diary of a Country Priest, says that, at the end of life, God will say to us, ‘Give me back my Word’. Praying the Scriptures is a way of anticipating just that; giving back to God here and now in this life the Word which we shall contemplate, please God, all together for all eternity.

Yesterday, in El Salvador, there was raised to the altars someone who really lived that Word; who took today’s Gospel radically to heart. I mean the Jesuit priest and martyr Fr Rutilio Grande, who just yesterday was declared by the Church Beatus, Blessed Rutilio Grande. Most of us are probably more familiar with another martyr of El Salvador, St Oscar Romero. But Rutilio Grande is significant because, in many ways, he inspired St Oscar to risk making the supreme sacrifice himself. ‘When I saw what had happened to Rutilio,’ he said, ‘I thought, “It’s my job to do down the same road”.’

Jesus’s return today to Galilee comes straight after his baptism in the Jordan. John the Baptist had prepared the way for him. In the same way, Rutilio is often portrayed as the one who prepared the way for St Oscar. They were unlikely friends but discovered a mutual respect for each other when living together in the seminary. They both came from very poor roots; but Rutilio became sensitized more quickly than Oscar to the plight of El Salvador’s poor in general and the call of the Gospel to defend them.

El Salvador was not a poor country in itself: it was rich in minerals and arable land. But the vast majority of those riches were concentrated in the hands of just sixteen powerful families who left most of the population in dire poverty. Rutilio was waking up to the belief that it can’t be God’s will that the poor should be so poor. He began to interpret those words of Isaiah which we hear today on the lips of Jesus, ‘He has sent me to bring good news to the poor’, as a call to help the poor. But how?

By encouraging his poor parishioners to form themselves into associations, to challenge the injustices perpetrated against them, and claim their basic human rights. But that threatened the ruling families and the governing militia. His preaching that, ‘if Jesus were to enter through the border … they would detain him … they would crucify him again’ was, for many of them, the last straw.  So it was that, one day in 1977, armed with just a bible and the Blessed Sacrament, Fr Rutilio was gunned down in his car along with two parishioners. One, an old man, Manuel Solorzano, was found trying to shield Fr Rutilio; the other, Nelson Lemus, a sixteen-year-old, an acute epileptic. The reaction of St Oscar was dramatic.

He had only just become Archbishop of Salvador. As Auxiliary Bishop, he had begun to wake up to the dire poverty of his people but had still, as yet, taken no action. He acted now, by suppressing all Masses in the Diocese and summoning all the faithful to gather for the one Mass, the funeral Mass of Rutilio, Manuel and Nelson in San Salvador Cathedral.

By St Oscar’s own admission, Rutilio’s death changed him. Seeing workers collapsing in the fields from exhaustion; hearing that a group of workers had been shot dead for protesting that they needed to eat and drink, he now found the courage to denounce their killers. And his denunciations grew. It was as if the whole nation tuned into the radio-transmissions of his Sunday homilies, in which he detailed every week the murder of countless innocent poor. His homilies were being listened to not just across El Salvador but beyond.

The Archbishop received a credible death-threat. He was told a priest’s vestments are not bullet-proof. He received a formal warning through diplomatic channels. He admitted to his friends that he was frightened of dying. But he said he was prepared, as he put it a few days before his death, to offer his blood for the redemption and resurrection of the people of El Salvador. And so it happened.

He was celebrating Mass in the chapel of the hospital where he lived. He raised the host in offering when he was distracted by something only he could see: everyone else was facing the front. He saw a door open at the back, a man raise a rifle and shoot him in the chest. Five minutes later, he’d bled to death on the sanctuary floor. Two days later San Salvador witnessed the largest funeral ever to have taken place there. Three years later, Pope St John Paul II came to pay his respects. Three years ago, Pope Francis canonized him.

When, at life’s end, Rutilio and Oscar were asked what word they wished to offer back to God, it will surely have been this word which we hear on the lips of Jesus himself this Sunday of the Word of God: ‘He has sent me to bring good news to the poor, to proclaim liberty to captives and to the blind new sight.’ And the Lord will surely have responded to each of them, ‘Come now, good and faithful servant; and enter into your reward.’