Homily for Ordinations to the Permanent Diaconate 2021 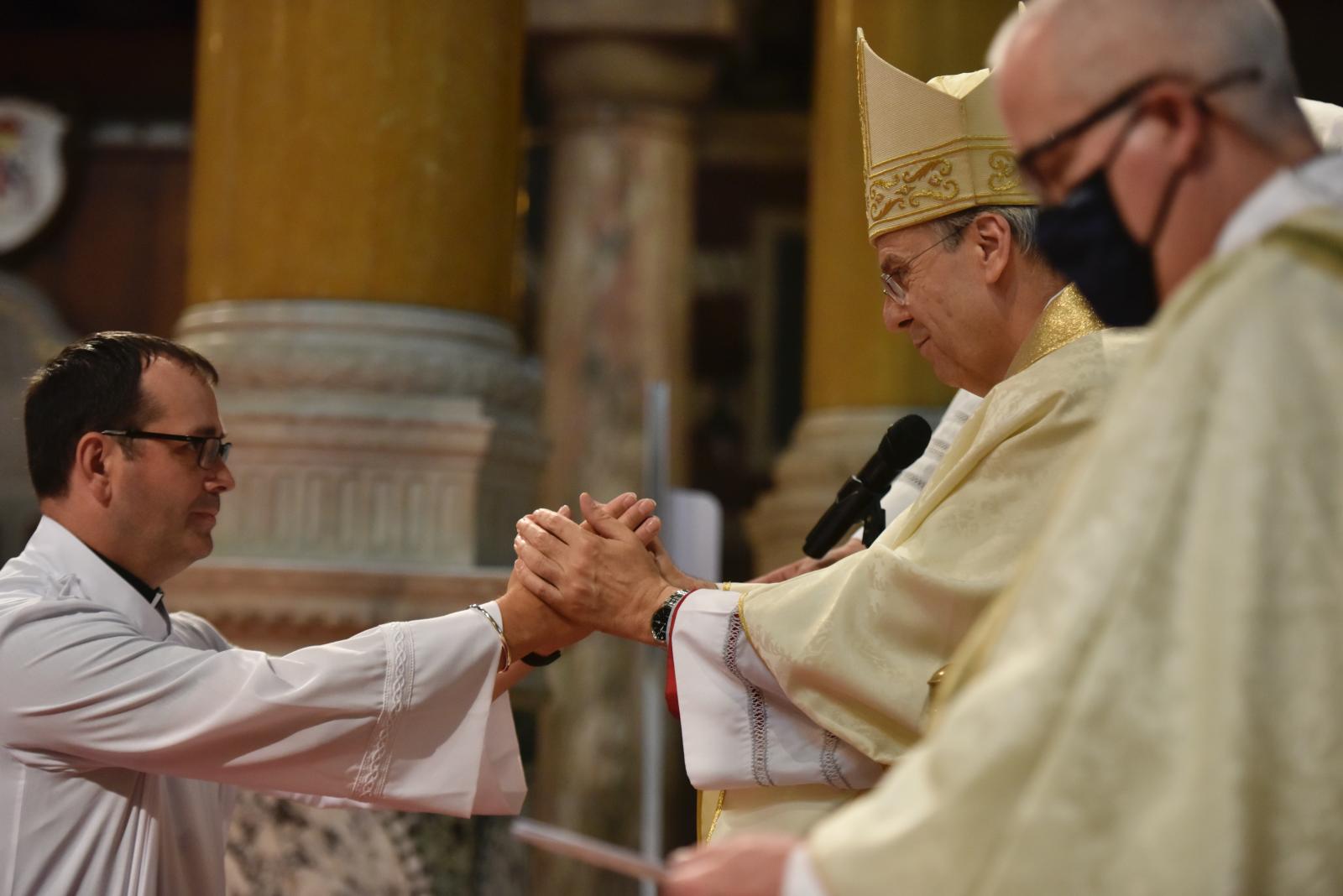 Given on 24th July 2021 at the Mass of ordination to the permanent diaconate of Brendan Day and Jayson Wingrove, celebrated at Westminster Cathedral.

Brendan and Jayson, I want first and foremost to thank you for your generosity in saying ‘yes’ to the call of Jesus to serve him in the Church as Deacons. It is a deeper commitment to service that you make today. But I sense, from my conversation with you both a week ago, that you know enough about service in the Church to know that, if it’s demanding, it will also be rewarding. It warmed my heart to hear you talk about how much you’d received from catechising children for First Holy Communion, from RCIA, from visiting the poor and housebound.

The Lord reminds us today, 'anyone who wants to be great among you must be your servant.' This was brought home to me when I was just a first-year seminarian and had the privilege of accompanying a Sister to the railway station for her to return home after decades of looking after us in the College: laundering, ironing, cooking, cleaning, and, above all, praying; praying for us!

As we approached the station, we asked her, with the innocence of youth, what message she would offer us to remember her by. She paused, smiled her kind, kind smile, and said, 'Yes, always remember Luke 17, 10.'  Luke 17, 10? We rushed to our Bibles on our return; and there we had it: 'Of course,' we said to each other, 'We are merely servants who have only done our duty.'

Of course, the services to which you commit yourselves are many and various.

Service is what you will be all about. So much so that Pope Francis calls Deacons 'Custodians of Service'; and he captures the breadth and depth of your ministry simply and profoundly in the one repeated word, ‘service’: service to  the Word, service to the altar, service to the poor. I saw this beautifully expressed in one of our churches not far from here which had, in a line, pulpit, altar, homeless Jesus. ‘Homeless Jesus’? Yes, it was one of those powerful ‘Homeless Jesus’ sculptures of a poor man, clearly down and out, asleep on a park bench. The image of the Homeless Jesus asleep in view of the altar and beneath the pulpit is one to hold in your hearts, Brendan and Jayson, as you serve. As you serve in the proclamation of the Gospel and break open for us the bread of that Word, as you serve at the altar, as you serve Christ in the poor. Also the first line of the prayer of St Ignatius: 'Dearest Jesus, teach me to be generous; to serve you as you deserve.'

The psalm given us today is a beautiful choice for a diaconal ordination, with its key phrase: 'The cup of salvation I will raise; I will call on the Lord’s name.'

It makes me think immediately of how, for the rest of your lives, your privilege it will be at every Mass to raise aloft the cup of salvation as the priest intones the great doxology, 'Through him, with him and in him.' Soon after I was ordained a deacon myself, someone said to me, 'When you raise the chalice alongside the priest, will you remember my poor brother and ask the Lord to have mercy on him?' Mysteriously, I do, often: I remember her brother as I lift up the chalice. Brendan and Jayson, hold this phrase also dear in your heart: 'The cup of salvation I will raise; I will call on the Lord’s name.' And whenever you raise the cup of salvation, call on the Lord’s name for all those you know who are in most urgent need of the Lord’s mercy.

Another phrase which binds your triple service, to the Word, to the altar, to charity, is a phrase which we derive from Pope St John Paul II, in his message following the Synod on the Laity.  It’s that 'Communion is for Mission'.

Communion is for Mission. It means our service of Christ on the altar only makes sense if we also preach His Word and reach out to him in the poor.

When we were baptised, he told the people of Rome, we put on Christ. Ordination is a more radical putting on of Christ. It calls for a deepening of humility; it calls also for a deepening of prayer. I use the word ‘call’ advisedly; because ‘call’ implies ‘vocation’. And Pope Francis is clear the Diaconate is a vocation; and a unique vocation at that.

I hope you and all Deacons here present are encouraged by the words of Pope Francis recorded in that interesting document, The Pastoral Conversion of the Parish Community, where he says, 'the image of a deacon as some sort of intermediary between the faithful and pastors is inappropriate …. (it is a) family vocation that requires service … Service is the key to understanding your charism.'

'A family vocation'. That doesn’t mean it’s the family’s vocation: no, the vocation is Brendan’s and Jayson’s. But it does mean it affects the whole family. And I would wish to take this opportunity to say thank you to their wives Lisa and Bernie for all they’ve done and will do to support their husbands in this unique vocation.

And, Brendan and Jayson, I hope and trust you will find yourselves in this vocation just as you each found yourselves in the vocation to marry. My prayer for you this afternoon is that you find it reveals to you even more deeply who you are and who Christ is. And that when, at journey’s end, you come to meet the Lord, you will indeed hear him say to you, 'Well done, good and faithful servant, enter into the joy of the Lord.'