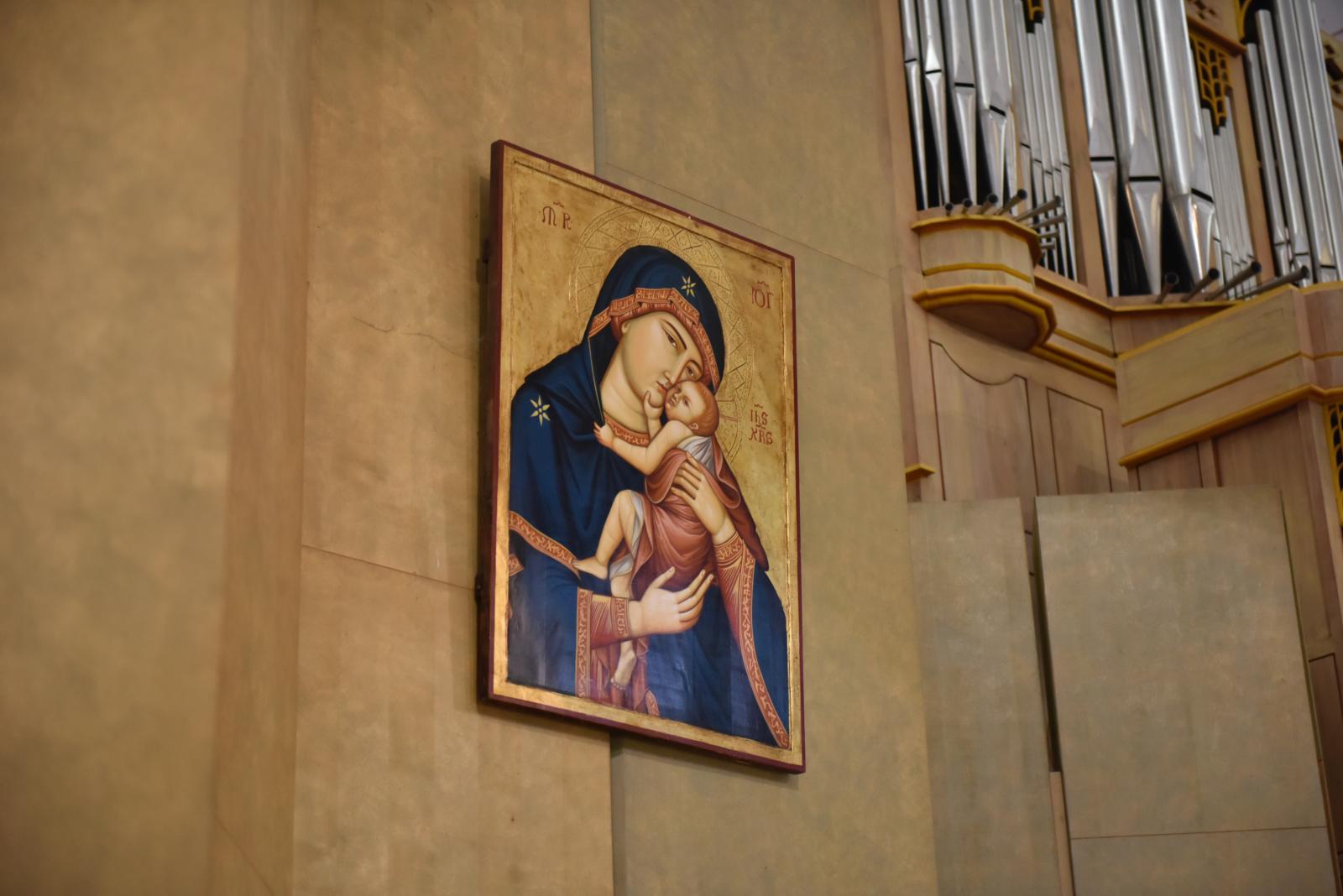 This chapel is adorned with a beautiful icon. The icon of Our Lady behind me. It is called the icon of Our Lady of Grace, Notre Dame de Grace. Have you ever wondered why this particular icon should have been chosen for this place? It was Bernadette’s choice, not for this chapel, obviously; but because, she said, it was the closest likeness she had ever seen to the Virgin who appeared to her.

Sculptors and painters had attempted to reproduce, in stone and wood, oil paint and charcoal, the image Bernadette described. But, time and again, she would see it and say, 'No, she wasn’t like that at all.' It was a frustrated Religious who had the idea of showing her a book containing images of Our Lady from across the world; and she fixed firmly on this one, saying, 'That’s what she looked like.  Just like that.'

I mention this icon because we have a nice diocesan link with it. It hangs in the Cathedral of Cambrai and Cambrai is the diocese in which is located Douai, home of the original Allen Hall. It means generations of students training for the priesthood in Douai will have prayed before this icon in Cambrai Cathedral.

Included among those many priests will have been the Douai martyrs, including our patron, St John Southworth. So, contemplating this image as we celebrate this Mass to launch us on our pilgrimage, we might ask Our Lady of Grace to join in prayer with all the Douai martyrs that we make indeed the best of pilgrimages and be open to receive all the graces Jesus holds out to us this week.

I find it interesting that Bernadette used to say that, when she beheld the Virgin, Mary seemed very much a child. Our Lady’s voice, which she heard for the first time when asked to return for the next fifteen days, she described as 'sweet and delicate'. This icon certainly captures that sweetness; as well as her youth. It also communicates something deeply tender, the way Mary holds Jesus’ cheek to her own.

But, if Mary was tender, the readings remind us she was also strong. For hers was nothing of not a calling to strengthen the brethren as they gathered in the Upper Room after Jesus’s Ascension to the Father. She had done the same as they cowered in that same place after Jesus had been taken from them and his body laid in the tomb. We see her strength all the more deeply in the way she stands beneath the cross with John the Beloved Disciple, faithful to the last.

We read in Luke’s Gospel that Mary pondered; that she pondered deeply. It was surely on pondering on all that had happened to her family that she derived this strength; the strength of seeing God’s grace at work in all had befallen them. How much more deeply she must have pondered as she watched now the lifeblood drain out of her Son. As she beheld the torn flesh of his face, she must have recalled holding his baby cheek to hers.

Mel Gibson, in ‘The passion of the Christ’, has her behold his deeply gashed knees. In the film, there flashes across her mind the memory of Jesus falling as a toddler 30 years earlier in the backyard at Nazareth; gashing his knees and coming to her howling, inconsolable; and she hugs him, holding him in his pain. How she must wish she could hold him in her arms right now. Instead, it’s Jesus who, form the throne of his cross, holds her in his loving embrace and entrusts her to John.

We are invited, on pilgrimage, to ponder all these things in our hearts too. You might like to ask yourself, would I like to enter Jesus’ passion more deeply this week; which passion narrative could I pray with? And, if you need inspiration for prayer, (by the way, Bernadette used to say she couldn’t mediate at all!) and you find the door to this chapel open, you might like to come and sit before this icon of Our Lady of Grace, and pray for grace and strength and the power to make new resolutions.

And try to recall this image especially when you’ve received Holy Communion. I say this because of something Bernadette said about praying after Communion. A childhood friend came to visit her in the convent at Nevers. She asked Bernadette, 'How do you manage to spend so much time in thanksgiving after Holy Communion?'

‘I imagine Our Lady herself giving me the the Child Jesus,' Bernadette replied.  'I receive him … I speak to him and he speaks to me.'

Speak to Jesus.  Speak to Jesus and Mary and Bernadette this week.  Tell them, from day one, all the joys and sorrows, needs, concerns and anxieties you bring with you on pilgrimage.  And, if it helps you, imagine holding the infant Jesus to your cheek as Mary holds him to hers; and you may be surprised by joy.