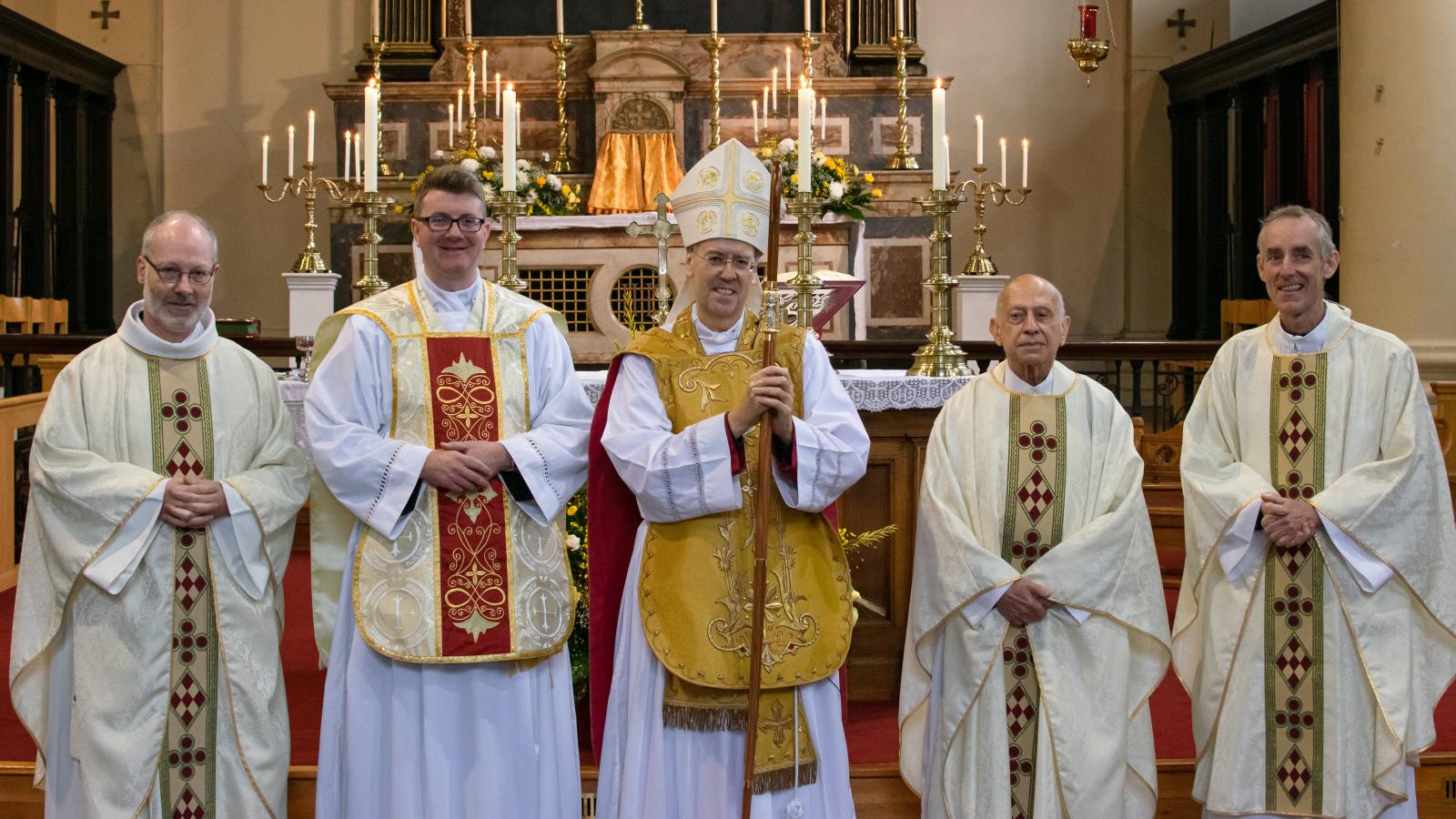 Given at the Parish of St Patrick's, Wapping on Sunday 17th October at Mass to celebrate the parish's the 150th Anniversary.

'To get us all to heaven.' That surely is the goal which unites every Parish Priest from Fr Andrew backwards. I like, on this day, to imagine all of them, not only the priests but the tens or hundreds of thousands of parishioners who worshipped before you in this place, looking down on us now from heaven; that great cloud of witnesses, as the Book of Hebrews calls them, who have long ago passed from the sanctuary of this church, through the veil and up into the inner sanctuary where God himself resides.

The truth of this is brought home to us as we hear the words of the prophet Isaiah, which unite us today to all the Good Fridays that have ever been celebrated in this church; because Good Friday begins with the very same words, 'The Lord has been pleased to crush his servant with suffering. If he offers his life in atonement, he shall see his heirs.'

You are the heirs not only of those who’ve worshipped here down the centuries; you are his heirs; and you should seek to recall both of these realities every time you celebrate the Holy Sacrifice of the Mass in this place and unite yourselves once again to the Holy Sacrifice which he offered up for us on Calvary.

Here, every time the people gather with their priest to celebrate the Holy Sacrifice of the Mass, Christ asks you once again, 'Can you drink the cup that I shall drink?' Will you be my servant too? Thoughts such as these help us fathom the full meaning of those stirring words which we utter in the Eucharistic Prayer, when we ask God’s peace on those servants of his 'who have gone before us (marked) with the sign of faith'. What is the sign of faith? It’s nothing less than the sign of the Cross, the mark of those who follow the Suffering Servant.

As we remember all these who have preceded us, we should feel joy in our hearts as we seek to recall some of them by name. In recalling some, we seek to recall all, in thanksgiving for the lives they lived out here in Wapping; and prayer for their eternal rest. Fr David Hickey, who celebrated the first Mass for the new Parish of St Patrick in October 1871, in the school-room located in Red Lion Street. He was your first Parish Priest. Fr Andrew, incidentally, is your 18th!

There had stood for a long time before that a chapel in Virginia Street. But this had been demolished in 1862 to make way for the Pennington Street Warehouses. When this site presented itself as a possible location for a church, Cardinal Manning agreed that Wapping should become a parish in its own right.

But, of course, that Mass celebrated in 1871 wasn’t the first Catholic Mass ever to be celebrated in Wapping; by no means. Right up until Tudor times, Mass was celebrated in the first Virginia Street chapel. We know that it was Bishop Malet, Mary Tudor’s personal chaplain, who celebrated the last Mass before Catholic worship was suppressed.

This thought evokes for us the radical proximity of Wapping to the Tower; and makes one think how the Catholics of Tudor Wapping must have been imbued by the courage of the martyrs who gave the supreme witness to the faith such a short distance away. The martyrs chose to sacrifice their freedom in order that Catholicism might endure in these lands; and the Holy Sacrifice of the Mass continue to be brought to the people even when prohibited.

Fr Webb is a tangible link with that heroic line, languishing as he did in Newgate prison as a result of the Gordon Riots. He was the first priest to celebrate Mass in the second Virginia Street chapel, named by now the chapel of St Mary and St Michael, a name which indicates its foundation from your neighbours in the Commercial Road Parish of the same name. If ever you find yourself over at Kenwood House in Hampstead, spare a thought and prayer for Lord Mansfield who lived there and was the Judge who took mercy on Fr Webb and ensured his release.

The names of two schoolboys evoke and represent the thousands of children who benefited from the schools which were such a vital part of the Parish’s mission right from the start of the 19th century. Nine year-old Robert Dudley, the first pupil of the parish, admitted in 1867.  Mr Kelly, the first Schoolmaster. Poor little John Duncan, dismissed because his parents pawned his school clothing.

When the school moved to Red Lion Street, Daniel O’Connell, recently elected to Parliament, decided to use it as his base in the capital. O’Connell was invested in the order of the Guild of St Joseph & St Mary at the Virginia Street chapel in 1844. The high altar before which he was invested is the altar which adorns, to this day, your Lady Chapel here in St Patrick’s. It’s interesting to know that Cardinal Newman, St John Henry Newman, also celebrated Mass at that altar.

As we heard, it was Cardinal Manning who sent Fr Hickey to launch the Parish in 1871. Manning himself came in 1877 to bless the grounds of the future church, here on this site. By 1879, your church was being built. Fr Lucas led the building programme. He was succeeded by Fr Beckley, who stayed 27 years; in that time, he rebuilt the schools. Cardinal Manning was back in Wapping at the height of the Dockers’ strike in 1888; and was famous for having made the peace.

It was around that time that Fr Kelly, first rector of Commercial Road, went to Ireland to persuade the Convent at Tullamore to send six Sisters of Mercy to East London. So, for 25 years, Mother Patrick and Mother Joseph walked every day from Hardinge Street, even through the cholera and smallpox epidemics, to care for Wapping’s children. The poorest children in the school had Fr Dunstan to thank for organising breakfasts for them, from out of the Gun Tavern. Did you know that Fr Beckley apparently discovered a Rubens, or at least a very good copy, in the church and sold it to alleviate the poor? It can be seen, we are told, in the National Gallery of Canada.

When Fr Beckley died and was buried out of Wapping, the docks stood still.

Bishop Fenton led the Mass; the Pieta at the back of your church is Fr Beckley’s enduring memorial. Cardinal Bourne came here to open a new boys’ school in 1931. Canon Reardon sold another good painting; and used the money to buy shoes for every child in the school. Cardinal Heenan came in the late 1960s to open the Social Club.

The rest, as they say, is history. I’ve known only Frs Connick, Reilly, Feltzman, Nicol and Samuels here. You will be able to name so many more who span the decades since the Second Vatican Council, and not just the priests but countless parishioners. Together they form a part of that cloud of witnesses whom we must surely aspire one day to join, please God, around the Throne of Grace.

They remind us it is why we’re here; why St Patrick’s is here, to help us all get to heaven! To those among them who were saints, of whom I’m sure there were a great number, we should have daily recourse of prayer.