Mass for Catholic Women Praying Together 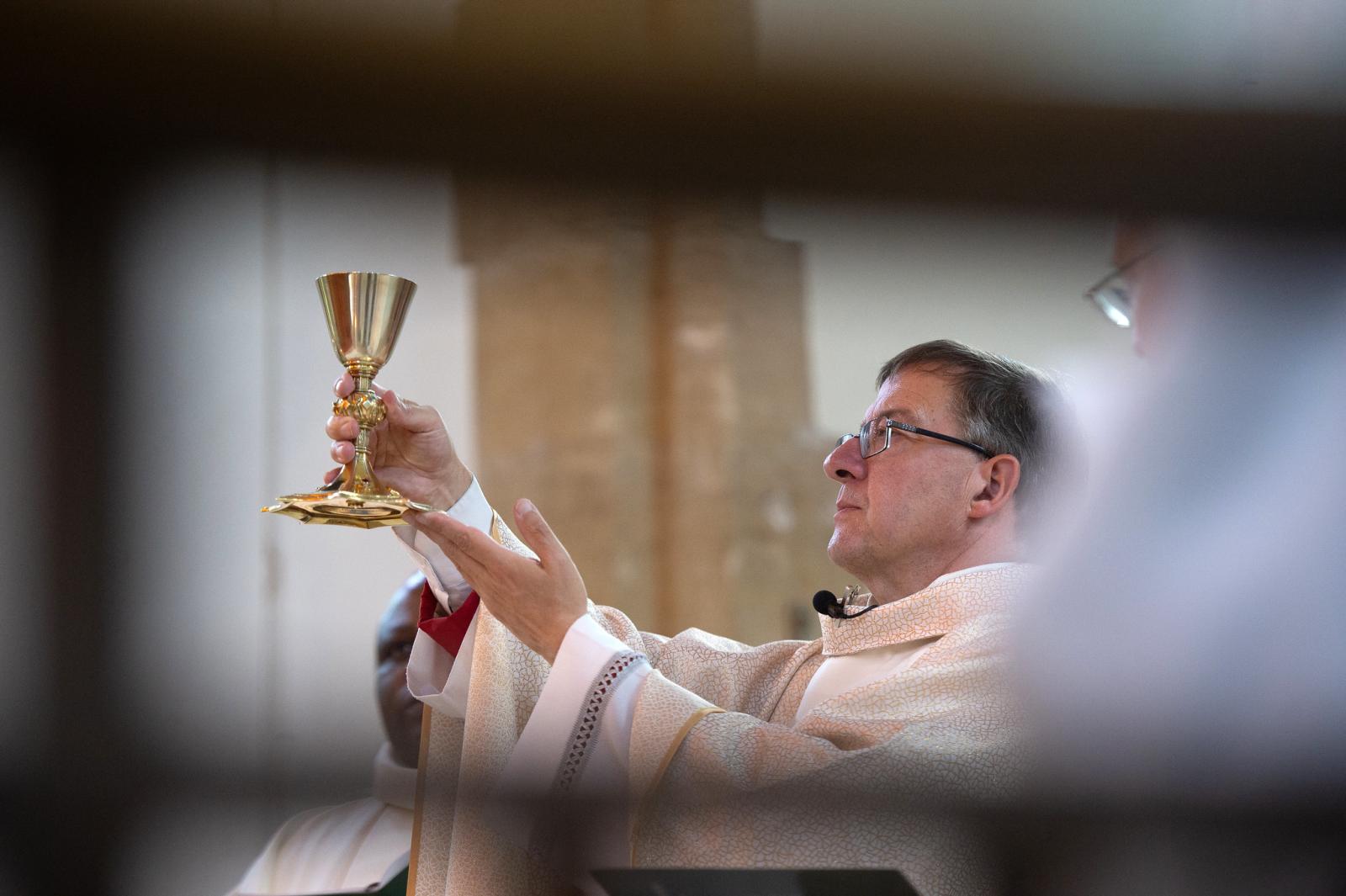 Given at the Mass for Catholic Women Praying Together at the Church of the Immaculate Conception, Farm Street, on 28th April 2022

It is a joy to be able to celebrate this Mass with you after a long wait due to the pandemic. We gather around the altar today in prayer with a very deep awareness of the terrible conflict in Ukraine and the destruction of countless lives and property. We have heard the very painful stories of refugees fleeing from so many cities and seen the terrible injuries and deaths. As we pray for peace, we are also aware of so many other conflicts which are overshadowed by this tragedy. They too lead to death, to the suffering of women and children who are forced to flee their homes and often subjected to sexual violence.

We hear the echoes of the voice of Rachel weeping for her children, ‘Thus says the Lord: “A voice is heard in Ramah, lamentation and bitter weeping. Rachel is weeping for her children; she refuses to be comforted for her children, because they are no more.”’ (Jer 31:15) The joy of the Easter season is overshadowed by tears of sorrow and the wounds which are borne by the Body of Christ suffering in the world. Just as St Thomas touched the wounds of the Risen Christ, so we touch his wounds as we touch the pain and suffering of his Body in the world. Your prayer joins with that of Our Blessed Lady, Our Lady of Sorrows, praying at the cross interceding for all our needs.

During this second week of Easter, the readings speak of the joy of the spread of the gospel in spite of the opposition and persecution of ‘The Way’ and helps us to penetrate more deeply the Easter mysteries of the new sacramental life in Christ. The third chapter of St John’s Gospel deepens the meaning of the new life of baptism, ‘For God so loved the world, that he gave his only Son, that whoever believes in him should not perish but have eternal life.’ (John 3:16) Jesus teaches Nicodemus that he must truly be born again into the life of Christ, ‘Truly, truly, I say to you, unless one is born again he cannot see the kingdom of God.’ This new birth is a birth by ‘water and the spirit’ which flowed from the side of Christ.  Our dignity as Christian women and men finds its source in our baptism. In today’s particular text, John the Baptist, the precursor and the friend of the bridegroom, points to Jesus Christ, the bridegroom, who comes from heaven, the Incarnate Son of the Father, and offers the gift of eternal life, both with him NOW and in the FUTURE.

Fitting to this celebration of Catholic Women Praying Together, tomorrow we celebrate the feast of Saint Catherine of Siena named as a Co-Patroness of Europe in 1999 by Saint John Paul II. Her life offers us inspiration. Catherine was born in 1347, the twenty fourth of twenty-five children, just at the time that the Black Death ravaged Europe creating fear as well as causing the greatest unimaginable loss of life, not dissimilar from our own situation.

Blest from her childhood with exceptional graces, she was able to move rapidly along the spiritual path traced by Saint Dominic through prayer, self-denial and works of charity. Remarkably, at the age of seven she vowed virginity to God, at fifteen she cut off her hair in defiance of her parents’ wish that she marry, at eighteen she received the Dominican habit. She lived in silence and solitude in her own room and went to St Domenico to attend Mass. In 1368 aged 21, this climaxed in her mystical espousal to Christ. She then returned to her family and committed herself to the service of the poor and the sick with the sisters of the Mantellate. This group of women, probably widows, associated with the Order of St Dominic, lived in their own homes, and gathered for prayer in the great church of St Dominic in Siena. Their prayer led them to serve the poor and the sick under the direction of a prioress and under the direction of the friars.

This homily cannot capture the richness and greatness of St Catherine’s prayer and theology. She writes of the ‘interior cell’ – the cell of self-knowledge – where she communed with God. There she was keenly aware of her sinfulness but even more aware of God’s goodness towards her, his mercy and generous love, which led to a deeper love of God and her neighbour. This knowledge of being redeemed through the grace of God lifted her up and led to abundant prayer of petition, response and thanksgiving. She holds together in deep intimacy her awareness of her sinfulness and her gratitude for God’s love and mercy. Her interior cell is the spiritual dwelling place where she understood the giftedness of God and also her absolute need of God's grace.

Delighting in the love and truth of God, St Catherine received a vast correspondence from the rich and the poor who sought her advice. In answering these letters, she entered into the ecclesiastical and social issues of her time seeking to bring peace between European rulers and to more local disputes. She tried to reconcile Florence with the Pope by placing ‘Christ crucified and Sweet Mary’ before all the parties involved and made it clear that in a Christian society there could never be grounds for conflict so serious that the reasons of force need prevail over the force of reason.

She called kings to account and addressed clergy of every rank demanding integrity in their personal lives and their pastoral ministry. She described the need to root out from the garden of the Church the rotten plants and put new plants, fresh and fragrant, in their place. She called priests and bishops to penance and conversion. She demanded that the Pope should return from Avignon to Rome, to the tomb of Peter, and so serve the Church rather than other interests. In last year’s message on this Feast, Pope Francis called her a ‘great female figure of faith’ and joined the celebrations in thanking the Lord for gifting the Church and humanity with such a great figure of a woman and a believer who calls the Church and people of goodwill to evangelical values.

I hope that this day of prayer and the example of St Catherine will foster in everyone here, a ‘joyful and fervent witness to faith and charity’ to promote a civilization of love.

Let us thank God for the genius of St Catherine and imitate her example. Yours is the worthy vocation of love to be peacemakers.