Homily for the Feast of the Exaltation of the Cross 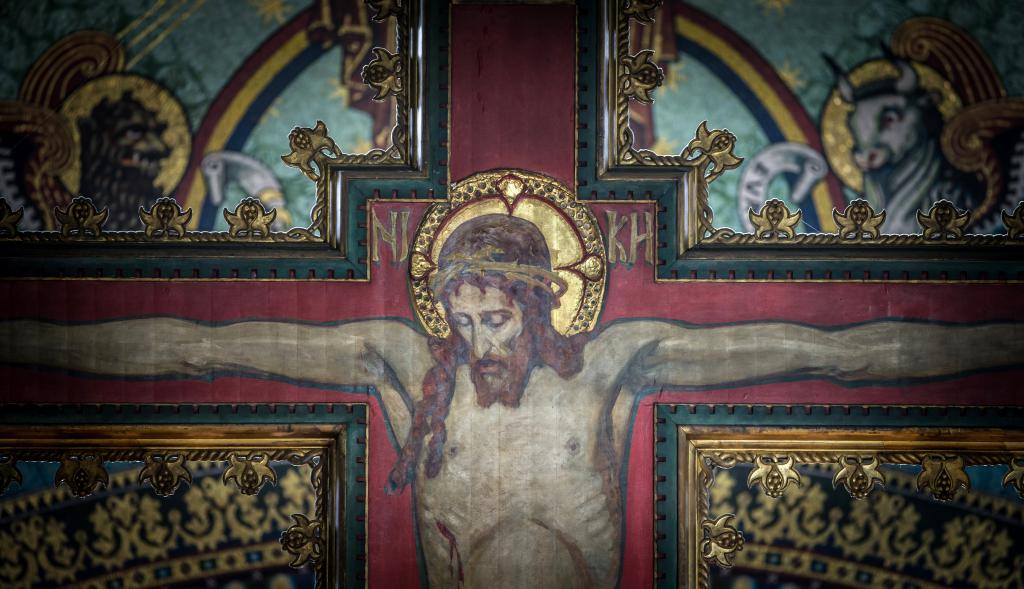 Homily given by Bishop John Sherrington at the Feast of the Exultation of the Cross, 14th September 2021, in Westminster Cathedral

‘We adore you, O Christ, and we praise you because by your Holy Cross you have redeemed the world.’

These familiar words with which we commence each Station of the Cross relate us immediately with the Via Dolorosa and the many times that we have prayed the stations of the cross pondering the Passion of Christ for the redemption of the world. This feast also reminds us that the pathway to eternity is only to be found through the cross, as St Rose of Lima wrote ‘apart from the cross there is no other ladder by which we may get to heaven’.

On this feast which celebrates the finding of the True Cross by Saint Helena and the dedication of churches built by Constantine on the site of the Holy Sepulchre and Mount Calvary as well as the restoration of the True Cross to Jerusalem in AD 629 by the Byzantine emperor Heraclius, we join in prayer with all our fellow brothers and sisters in Christ who bear the scars and wounds of the cross powerfully in their bodies and especially in their communities in the Holy Land. They bear the cross and take upon themselves what is ‘lacking in Christ’s afflictions’ (Col 1:24) because only in this way can they avoid despair or try to flee from the situation. The Feast of the Exultation of the Cross promises the victory of hope and the triumph of the Paschal mystery as Christ’s kingdom is established.

The hope of Christ’s victory echoes into the darkest and most dangerous situations of suffering; into the darkness and desperation of lives enmeshed in sin; the pain of the suffering caused by one person to another in conflict and warfare; the suffering of illness and the proximity of death. By the cross, God has raised Christ high, so that we bow and bend the knee at the name of Jesus which is the name of victory, hope, love and forgiveness. As Martin Luther King preached in 1957, ‘Good Friday may occupy the throne for a day, but ultimately it must give way to the triumphant beat of the drums of Easter.’

The words of Jesus to Nicodemus give us the hope we celebrate in this feast, ‘and the Son of Man must be lifted up as Moses lifted up the serpent in the desert, so that everyone who believes in him may have eternal life in him’. This eternal life is not merely life beyond the grave but eternal life in him and with him who dwells within us, nourishes us by his Body and Blood, pours out the gift of mercy from his Piercèd Side and embraces us on the pilgrimage way of life. The gaze of the Merciful One looks down upon us as he looked down upon Our Blessed Lady and those gathered at the foot of the cross. His outreach and embrace draw us into his life and provide the invitation to touch his wounds found in his Suffering Body on earth.

Fr Raniero Cantalmessa reflected in a homily: ‘“Ecce homo!” “Here is the man!” exclaims Pilate in presenting him shortly after to the people (Jn 19:5). These are words which, after Christ, can be said of the endless host of men and women who are vilified, reduced to being objects, deprived of all human dignity. The author Primo Levi titled the account of his life in the extermination camp in Auschwitz If This Is a Man. On the cross, Jesus of Nazareth becomes the symbol of this part of humanity that is “humiliated and insulted.” One would want to exclaim, “You who are rejected, spurned, pariahs of the whole earth: the greatest man in history was one of you! Whatever nation, race, or religion you belong to, you have the right to claim him as yours.”’

The saints reach this depth of love so that they may walk this pathway. St Teresa Benedicta of the Cross writes, ‘Thus faith in the Crucified – living faith, united with devoted love is for us the doorway to life and the beginning of the glory that is to come. Thus the cross is our only boast.’ In her deep faith she unites herself with the Cross of Christ and is ready to bear it unto death at Auschwitz with her family of Jewish brothers and sisters and so enter into eternal life. She desires at the end of her life to share in the sufferings of Christ; there can be no other way for the one who has loved so deeply because ‘love is strong as death’ and she desires to be sealed into his death through her love for him and the power of his love for her (SS 8:6).

We can easily feel overawed by the path the saints trod, perhaps preferring to avoid the cross, to walk from the suffering faces because they are too hard to see and the pain too deep to bear. It is often easier to pass by on the other side of the road just as the priest and the Levite walked past the suffering and blood-stained man lying on the ground on the road from Jerusalem to Jericho. Perhaps like the disciples who were often unresponsive to Jesus’ message of suffering, we too may be somewhat inert. At that time, we recall with faith God’s mercy that pours down from the Pierced One who forgives our sins, and the sins which crucified him on the cross.

To reach the embrace and carrying of suffering is itself a grace. Human weakness may tempt us to deny the path of the cross or to flee from it. Perhaps the prayer of St John Henry Newman can help those of us who suffer these temptations and seek to avoid the true pathway to heaven, ‘And lastly, O my dear Lord, though I am so very weak that I am not fit to ask Thee for suffering as a gift, and have not strength to do so, at least I will beg of Thee grace to meet suffering well, when Thou in Thy love and wisdom dost bring it upon me. Let me bear pain, reproach, disappointment, slander, anxiety, suspense, as Thou wouldst have me, O my Jesu, and as Thou by thy Suffering hast taught me, when it comes… knowing that in this way I shall gain the promise both of this life and of the next’ (Meditations ‘the Power of the Cross’, p.337)