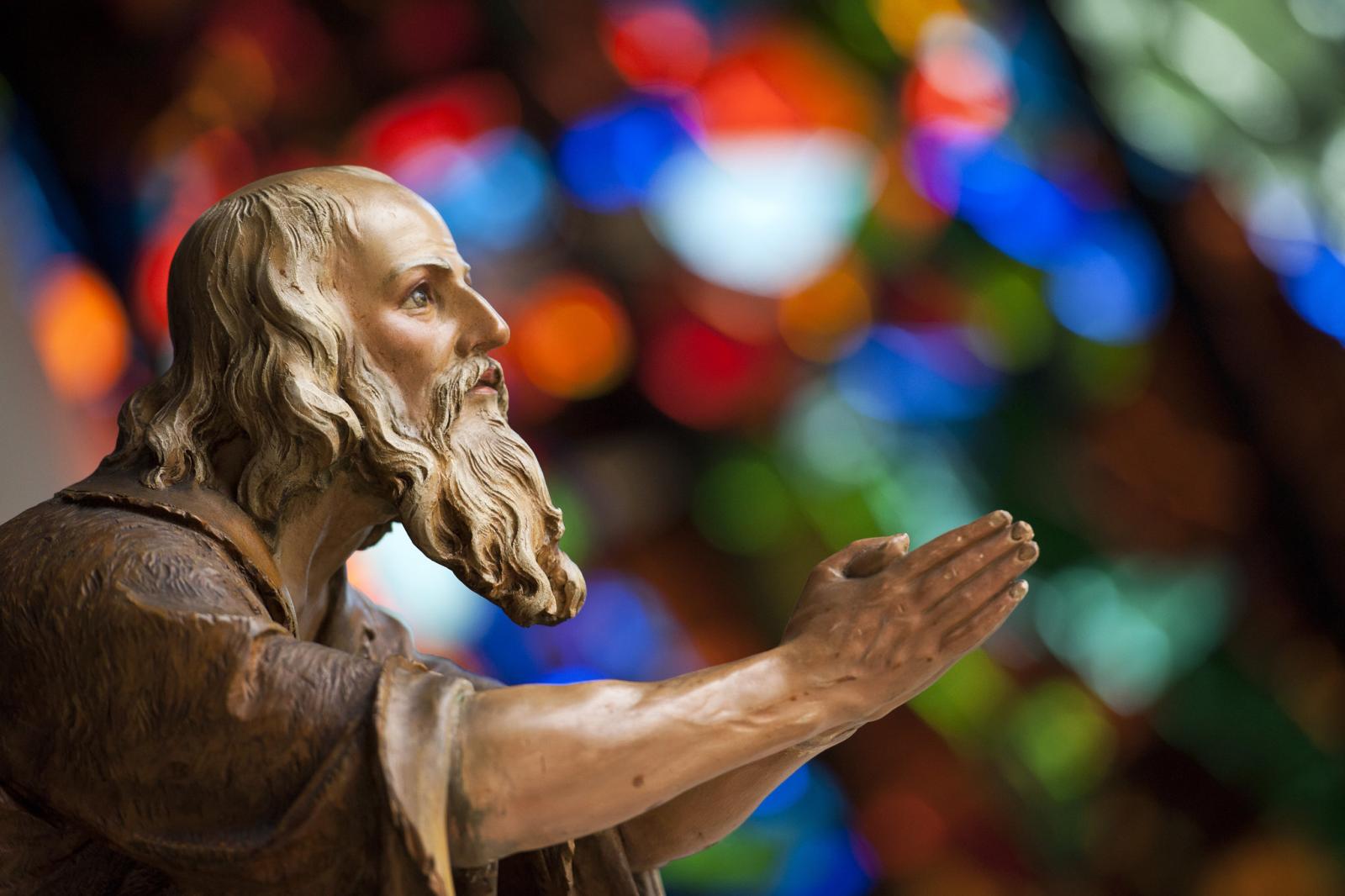 On 17th June, Bishop John Sherrington delivered a short address as part of the virtual roundtable event, ‘How to have a happy death’. The event was organised by the Diocese of Westminster’s Agency for Evangelisation, in collaboration with St Joseph’s Hospice, Hackney and the Centre for the Art of Dying Well at St Mary’s University, Twickenham. The speakers also included Sr Rita Dawson MBE and Edward McGuigan from St Margaret of Scotland Hospice and Professor Julia Riley, Visiting Professor of Palliative Medicine and End of Life Care at Imperial College London.

The virtual roundtable discussion took place in the week leading up to the Day for Life, an annual event in the year of the Catholic Church in England and Wales, dedicated to raising awareness about the meaning and value of human life at every stage and in every condition. In the year of St Joseph, Bishop John highlighted the instructive example of St Joseph in discussions around how to achieve a ‘happy death’.

I entrust this talk to St Joseph, the patron and intercessor for the dying. St Joseph protects the dying from the temptation to lose faith and prays for them in their vulnerability just as he protected Our Lady and the Child Jesus in their lives. He teaches us about care and responsibility for the weakest and most vulnerable in society, especially those who are dying (Pope Francis, Patris Corde 5). An eighteenth-century painting, The Death of St Joseph, by Francisco Goya, shows the teenage Jesus looking into the eyes of St Joseph who lies dying in his bed with Our Lady at his side; three angels are present. Jesus, having been brought up by his Protecting Guardian is now close to him as he dies. This scene of tender humanity with the presence of Christ close to the suffering of the dying is a daily scene in homes and hospitals as people die surrounded by compassion and care. St Joseph surrenders himself into the mercy of God and hands himself over to his Guardian Angel who leads him to heaven.

As Christians we face death knowing that it is not the end of our life’s journey but rather the awakening to the new beginning of the life of the resurrection. The well-known words of the Preface of the Funeral Mass give deep hope: ‘In him (Christ) the hope of blessed resurrection has dawned, that those saddened by the certainty of dying might be consoled by the promise of immortality to come. Indeed, for your faithful, Lord, life is changed not ended, and, when this earthly dwelling turns to dust, an eternal dwelling is made ready for them in heaven.’ Death is a mystery and a personal journey.

The Christian tradition presents comforting images of people gathered around the death bed of the one who is dying. Giotto’s wonderful painting of The Death and Ascension of Saint Francis portrays Francis on his death bed surrounded by his fellow friars who sing the praise of God. Saint Augustine talks to his mother at Ostia near Rome and recognises that she is too ill to make the journey home to North Africa. Saint Monica simply says, ‘Bury my body wherever you will; let not care of it cause you any concern. One thing only I ask you, that you remember me at the altar of the Lord.’ Each of these scenes portrays the importance of prayer, accompaniment and solidarity with the one who is dying. Being present is an act of true compassion. At Mass, Catholics are consoled by the example of Jesus’ own journey through his suffering on the cross, his passion and they take heart from his prayer, ‘Into your hands, O Lord, I commend my spirit’. For each one of us, this final act of surrender is the climax of a life often filled with many surrenders, for example, the death of family members, broken relationships, lost loves, the decline in strength, or letting go of ambition.

Every year around the Commemoration of All Souls, I listen to Elgar’s famous work, The Dream of Gerontius. In music, which is both dramatic and consoling, it describes the journey of the old man who is dying and going to meet his Maker. We hear the voices of the angels leading him towards the vision of God, the Mass being celebrated on earth and in heaven, and the dramatic journey of purification when he recognises that he is a sinner in front of the blinding light of God’s love. The music of the Proficiscere: Go Forth, Christian Soul… brings tears to my eyes and reminds me of the consoling words spoken by the priest in the prayer of the commendation of the dying.

The importance of the final journey of the soul has led to much reflection over the centuries. In the fifteenth century, the ars moriendi, the art of dying well, contributed literature and art to our understanding about a good death. Often portrayed as a combat of the good and evil spirits, prayer and the sacraments provided the means by which the Church helped sinners avoid temptation and fix their focus on heaven. In the seventeenth century, St Robert Bellarmine wrote of how the Church can help the dying person maintain an attitude of hope, avoid the temptation to despair and dispel fear by placing their trust in God. He includes the importance of saying goodbye to friends, being reconciled with those with whom one is estranged, and also the practical need of a will.

The development of medicine in the sixteenth century led Francisco de Vitoria at the University of Salamanca to ask whether it was necessary to maintain life by all necessary means. A tradition developed in the Catholic Church which recognised that death is part of life and that one is only bound to ‘ordinary means of treatment’ rather than ‘extraordinary means or remedies’ to keep a person alive. Some treatments are more beneficial than others. Others may be unduly burdensome. The expertise of medical professionals helps determine the best treatment taking into account the physical, psychological, and spiritual capacities of the person; what is extraordinary for one person may be ordinary for another. The decision not to have a further treatment is one that can be made after prayer and discernment with others. Fundamental to this understanding is the role of the doctor to provide treatment and care and not to intend to end life. The Church has always recognised that it is part of normal care to give fluids and food including by assisted means. Others will talk more fully about this.

We can approach death with trust in God and fervent in prayer. Death is the entrance to eternal life through prayer and the sacraments. True compassion is found in relationships of solidarity with others, presence to one another, and good care. Christ reveals in his life that there is a point when a person is called to surrender his or her life into the hands of God and the care of others. This is being fully human.